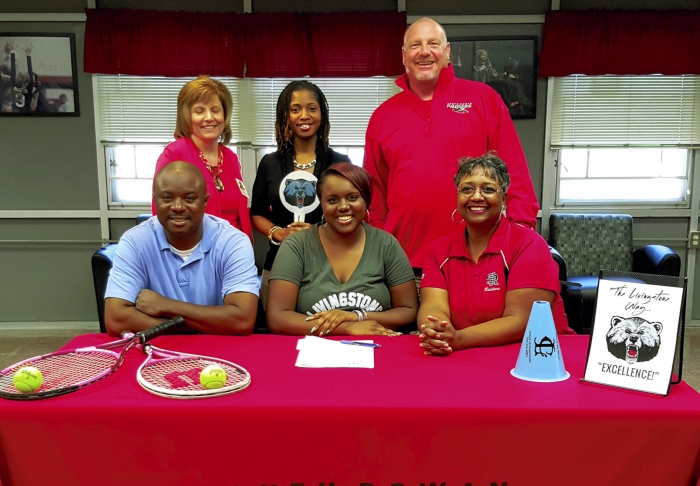 CHINA GROVE — The Mason family has been good for South Rowan athletics.
Senior Mariah Mason signed recently with Livingstone’s women’s tennis program.
She had positive role models not only in her parents, Joe and Devonia, but in her older brothers, Cadarreus and Devin.
It’s a religious, humble family, but at the same time, the Masons are tough competitors on athletic fields and courts.
Cadarreus had an appendectomy his senior year at South. He missed only three football games, returning in time for the playoffs. He went on to become a starter at UNC Pembroke, and he’s now a defensive lineman for the Florida Tarpons in American Indoor Football.
Devin is a 6-foot-2, 240-pound defensive lineman at Guilford. He played in every game for the Quakers last fall as a junior and had two sacks. He should have a big senior year.
Now it’s Mariah’s turn to be a college student-athlete.
“God blessed my brothers to be able to play football in college, and now he’s led me to college to play tennis,” Mariah said.
Mason started playing tennis late. She didn’t take up the sport until she was at China Grove Middle School. She considered softball, but then she decided she could pick up tennis skills more quickly. That decision paid off.
By the time she started playing at South, she realized tennis might help pay for her college education.
“When I was a junior, I went and watched Livingstone’s tennis team play,” Mariah said. “I got to know Coach (Gwen) Jackson. We stayed in contact and she’s helped me with some techniques.”
Mariah wanted to go to one of the HBCU schools (historically black college and universities), and she was hoping to find a school that was close. Livingstone was the perfect fit in every way.
“It felt like home when I visited there,” Mariah said.
Mariah’s mother has been her high school coach. She played No. 2 singles for South last fall and teamed with Cierra Hunter at No. 1 doubles. She helped South win six of its 13 matches. Mason won three singles matches (A.L. Brown, Northwest Cabarrus and Central Cabarrus) and also won three doubles matches.
“We had some very good matches,” Mariah said. “We played in a tough conference with a lot of great players.”
Mariah said the most satisfying win of her senior season was a 6-4, 6-4 singles victory against A.L. Brown. The Wonders are neighbors and rivals.
The hardest loss came in doubles in the South Piedmont Conference tournament because Mason had hoped to finish her high school career competing in the regionals.
She’ll start fresh at Livingstone, and she should provide a boost for a squad that was 3-12 this spring.
As far as academics, Mariah’s favorite subject is English, but she plans to pursue a social work degree. Helping other people has been at the top of her priorities list for a long time.
Mariah’s father is excited about her college choice. He’ll get to see a lot of her matches.
“I hope Mariah’s signing lets people know that you don’t have to go far away to play a sport and get an education,” Joe said. “There are a lot of opportunities for Rowan County’s young people at Livingstone.”