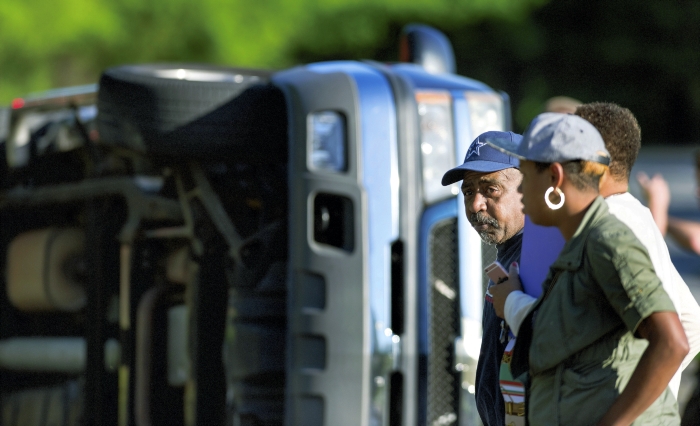 JON C. LAKEY / SALISBURY POST Dale Griffin (facing) waits near his Chevrolet Avalance along West Innes Street on Monday afternoon. Griffin's vehicle came to rest on it's side after collision with a white Volvo sedan. Monday, April 18, 2016, in Salisbury, N.C.

SALISBURY — Emergency responders pulled Dale Griffin out of his truck through its broken windshield after the vehicle overturned on West Innes Street early Monday evening.

The accident occurred minutes before 6 p.m., and Griffin’s truck, which had been hit in the rear by a car, ended up on its driver’s side next to the Rowan Rose Society’s median of flowers.

Griffin and the car’s driver were not seriously injured and declined going to the hospital by ambulance, but Griffin said he was going to go by the medical center later to be examined.

Griffin’s 2004 Avalanche was heading east on West Innes Street when Griffin said he swerved to avoid a four-door Volvo, which apparently had pulled out from Summersett Funeral Home.

The Volvo hit the Avalanche in the rear, causing the truck to spin around and flip onto its side. The Volvo had extensive damage to its front.

Griffin said he was caught inside his truck until the Fire Department arrived. He was wearing his seat belt. His truck’s air bag did not deploy. The truck’s nose ended up on the sidewalk next to the rose bed, and the truck was pointing west — opposite of the way Griffin had been traveling.

Griffin was upright and walking after the accident and able to speak to Salisbury Police. Until the scene could be cleared, traffic going west was reduced to a single lane, and eastbound traffic was diverted onto Old West Innes Street.