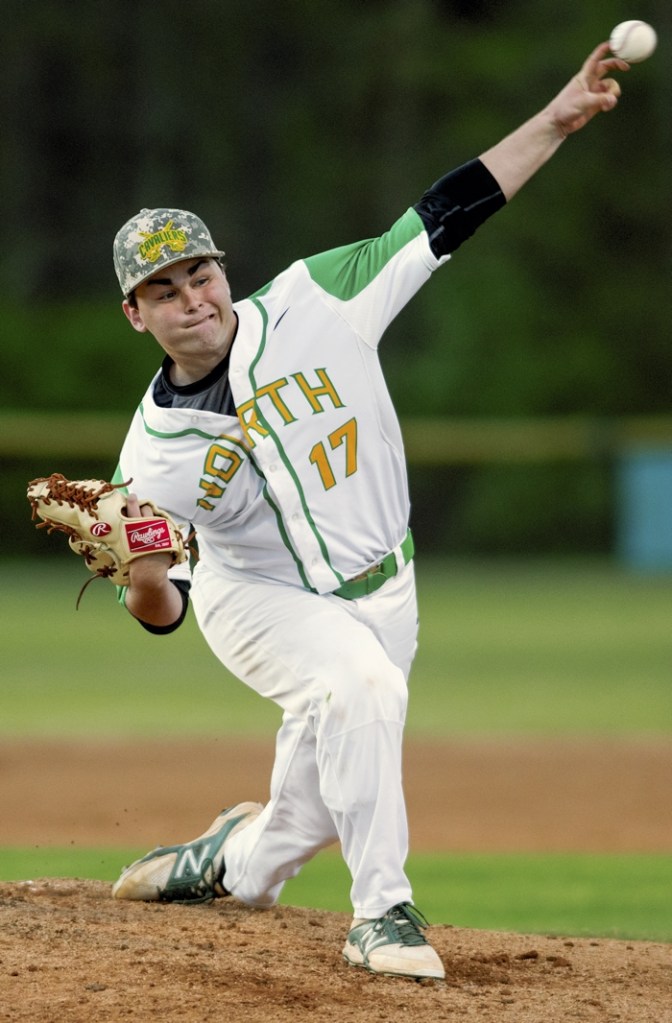 SPENCER — North Rowan pitcher Brandon White paid a visit to Newman Park recently to watch his future school, Belmont Abbey, take on Catawba, the college where many of his friends play.
The scary final score after 44 base hits and 24 free passes was Belmont Abbey 24, Catawba 22.
It was enough to give a pitcher nightmares, but White didn’t leave Newman Park trembling. Actually, it gave him confidence that he could help a college program as a freshman.
White signed with Belmont Abbey last week, making things official with the Crusaders a year and a day after he tore an ACL in the top of the first inning in a game at Salisbury.
“I remember that day, it’s not one that I’ll ever forget,” White said. “I got an infield hit and I ran through the bag. The throw got away and I heard coaches yelling ‘Two!’ I planted to turn toward second base. That’s when I went down.”
White has courage. After he was helped to his feet, he didn’t want to come out.
“I really didn’t think it was that bad, but I tried to throw and there was no stability in the knee,” he said.
Three weeks later, he tried again. On one leg, he pitched into the sixth inning in a 3-2 loss to East Davidson.
“I was proud of that game, even though it was a loss,” White said. “I gave it all I had.”
He would try to pitch one more time, but that outing was ugly — five earned runs in two innings. That game inflated his ERA to 3.80 for his junior year. That’s the only time in his four-year varsity career that his ERA has been higher than 2.42.
A typical left-hander who relies on low-and-away precision, White is what coaches refer to as a bulldog. The tougher the situation, the more he bears down, the harder he battles.
Consistently terrible luck while pitching for inconsistent teams explains White’s 11-14 career record. He’s been a lot better than his record. He’s struck out 129, while walking 47.
“I’ve known Brandon since third or fourth grade,” North catcher Jake Pritchard said. “He knows what he’s got to do. He’s never been super over-powering, but he can locate all his pitches.”
White isn’t a swift runner, but he has great hand-eye coordination. He hits .300 every year, and when he’s not pitching, he can do a solid job for the Cavaliers in left or right field.
This season White is pitching for the most talented North Rowan team he’s ever been part of. His ERA is 1.87, but somehow his record is 1-4. His lone victory was a shutout of West Davidson that kept North (9-7, 4-1 CCC) in the race for the Central Carolina Conference championship.
White has been a key part of North’s varsity staff since 2013. It was in early March of his freshman year that coach Aaron Rimer sent White to the mound at South Rowan.
Rimer appeared to be throwing the kid to the wolves, but before that night was over, Rimer knew he’d found a key part of his rotation. White shut out the Raiders. North won 4-0.
“Brandon was down there at South pitching out of his mind,” Rimer said. “He gets a guy out and then he gives their dugout a look. I had to go out there and calm him down. I told him, ‘Not yet. You haven’t earned the right to be giving people looks.’ But that night said a lot about him. He’s pitched with that same kind of confidence and competitiveness his whole career.”
The knee injury was a setback, but only a temporary one.
“It did stop his progress for a while,” Rimer said. “But in the long run, it’s made him better. I had a long talk with him after he got hurt and I told him he could use the injury as an excuse not to play college baseball or he could do what he needed to do to get better.”
The worst part of White’s injury was that it cost him a spot on the 2015 Rowan County American Legion roster. That team won the state championship.
“I watched the games and cheered for the guys, but it was tough not being able to be part of that,” White said.
White’s post-surgery comeback started with attending 100 percent of Rimer’s volunteer throwing sessions in the offseason.
“Brandon worked his tail off,” Rimer said. “He did a fantastic job. Now he’s in the best shape he’s been in, and he’s picked up 3 or 4 miles per hour.”
White made a favorable impression on Belmont Abbey head coach Chris Anderson last winter when he attended Belmont Abbey’s camp.
“Coming off the surgery, I wasn’t sure how I’d do, but I threw a bullpen there and things were clicking that day,” White said “Then I talked to Coach Anderson. That led to visiting the campus and going to some of their games. Then I committed.”
Rimer and Anderson both played for Catawba, and they’ve been friends for years.
Anderson has piloted Belmont Abbey to a current No. 8 ranking in Division II, so White will be joining a strong program that went to the D-II World Series in 2009.
White will be prepared for the jump to the next level.
“I’ve brought some of the things that Chris does with his Belmont Abbey pitchers and I’ve used them with our pitchers this year,” Rimer said. “College practices are more intense than high school practices, but Brandon will have a little bit of a head start.”

Tyler Mulkey getting use to college golf pressure