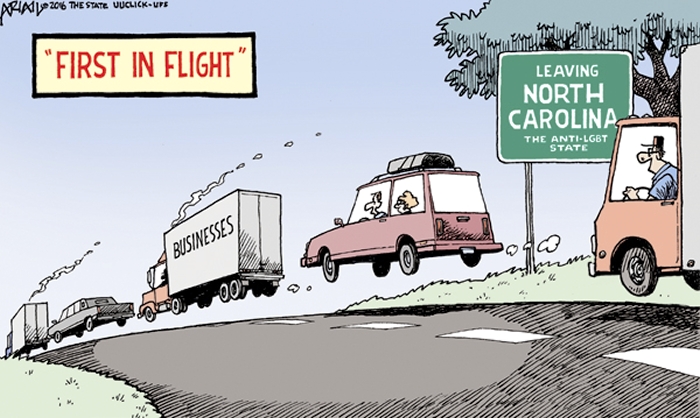 RALEIGH — If social media accounts and responses to media questions are any indication, Republican Gov. Pat McCrory wants to distance himself from House Bill 2.

His Democratic opponent in the November election, Attorney General Roy Cooper, seems OK keeping it in the forefront of voters’ minds.

At a recent event in Asheville, Cooper called for the repeal of House Bill 2, which has become the top issue in one of the most contentious governor’s races in the country.

McCrory, conversely, has deflected reporters’ questions about the legislation, and instead wants voters to pay attention to other topics. Recent posts on his Twitter and Facebook accounts focus on new jobs created under his administration, his education budget proposal to raise teacher salaries, the state’s $237 million budget surplus, the N.C. Azalea Festival in Wilmington, the UNC men’s basketball team’s championship appearance, a proposed African-American monument at the State Capitol, autism awareness and child abuse prevention, among other issues.

Passed by the Republican-controlled General Assembly and signed by McCrory last month, House Bill 2 bans local governments across the state from passing anti-discrimination rules that would benefit the LGBT community. It also nullified a Charlotte ordinance that would have allowed transgender individuals to use the restroom corresponding to their gender identities, rather than the gender listed on their birth certificates. And the law prohibits workers from filing discrimination claims against employers in state court.

Supporters say the legislation is about safety and simply ensures that men can’t use women’s bathrooms. Opponents say it goes much farther than that, legislating discrimination against the LGBT community. Gay rights groups have already filed a lawsuit challenging House Bill 2, and Cooper has said his office won’t defend the state in court.

It’s safe to say House Bill 2 has divided the state.

But what will it all mean come November, when the state’s top office is on the line in McCrory vs. Cooper?

That remains unclear. A recent poll for Time Warner Cable News North Carolina, conducted by Survey USA, showed 51 percent of state voters believe the General Assembly did the right thing in striking down Charlotte’s ordinance. Forty percent said transgender individuals should be able to choose which public bathroom to use.

Those numbers would appear to bode well for McCrory and Republicans.

But the same poll showed that 53 percent of voters said lesbian, gay, bisexual and transgender individuals should be included in any law preventing discrimination along with race, religion, color, national origin or biological sex. Thirty-four percent said the LGBT community shouldn’t be protected from discrimination.

That would appear to favor Cooper. More voters also said House Bill 2 would have negative effects on business recruitment and the state’s overall image.

But it doesn’t really matter what the political pundits and operatives think.

What matters is the fact that 56 percent of poll respondents said the House Bill 2 issue would make them more likely to vote in November.

It’s you, the voters, who will decide.

Patrick Gannon is editor of the Insider State Government News Service. Reach him at pgannon@ncinsider.com