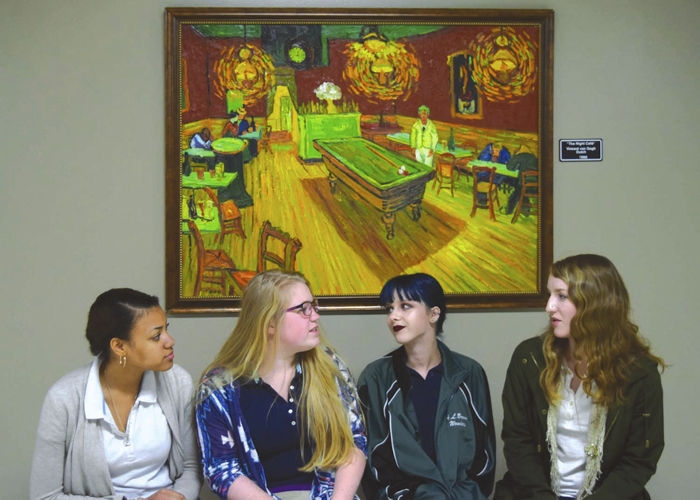 KANNAPOLIS — Larry Efird is an English and humanities teacher at A.L. Brown High School. He very clearly remembers the day he brought up the subject of art in one of his classes, using Rembrandt as an example. Blank faces. No one in the class had heard of Rembrandt. And it’s not an uncommon problem.

Efird makes a habit of taking his humanities class to art museums to see famous paintings up close and personal, instead of on a glossy textbook page – but not every student will have that opportunity. So Efird decided to make one. All he needed was a space.

As it turned out, a few years earlier, two other A.L. Brown teachers raised money to repaint the school’s social room – a waiting area for the Kannapolis Performing Arts Center, tucked away next to the school cafeteria. With new, low lighting and a fresh coat of paint, the long, bare space was idea for an art gallery – and it was empty.

“They got the room ready,” Efird said, “We just took it to the next level.”

Efird began combing flea markets and antique stores for deals on good quality art prints. And as he found each one, he hung it on the wall.

The gallery still has a long way to go, but now there are strategically placed benches, and the walls are lined with Rembrandt, Van Gogh and Seurat.

“We’ve got lots of room for more,” Efird said.

And students from his humanities classes have been cheering him on.

“Mr. Efird actually did it,” student Katherine Breeggelann said. “There’s actually artwork in here — because he was always talking about it.”

For students who are fans of the arts, the gallery represents something hopeful – a safe space for arts and humanities – programs that are often sacrificed in the grand scheme of education.

“There just so much art and humanities missing from education these days,” Breeggelann said.

For student Macie Eury, art is a unique way to learn about history and culture. Art, especially American art, is a way to learn about the country’s rich history – if students aren’t exposed to that, they’re losing a piece of their identity.

“We need to remember where we come from,” She said.

Student Juli Ward agreed. People aren’t always as invested in art as they are in sports, or STEM classes – but the gallery provides important exposure to the arts.

“Art expresses culture,” Ward said, “And you can’t get culture out of math.”

But the gallery is more than a lesson on art history – it also weaves itself seamlessly into the history of A.L. Brown. The social room has been many things over the years. It’s had a jukebox and a pool table – and now it’s an art gallery. Efird said the past glory of the social room has worked its way into students’ school pride, and he hopes the gallery will do the same.

The gallery still has a long way to go. As far as decorations go, Efird wants to redo the floor and add ferns – but it’s the art that he has big plans for. While the social room currently has about 10 prints hanging on the wall, Efird has about 70 more, stashed away upstairs in his classroom, that were donated by the Cabarrus Arts Council. And an in-school partnership has A.L. Brown’s carpentry class knocking out frames for the prints’ future debut.

Eventually, Efird wants to add a section for African-American and Hispanic art, and group other prints by era so that students can go on self-guided tours. He’s also interested in adding a sculpture section.

In the meantime, there’s been a lot of positive feedback from the students. Eury has even started a club – the humanities and history appreciation club – to help with the gallery. It’s the first humanities and art-themed club the school has had in several years, Efird said.

But Efird dreams big, and there’s still a lot of work to do.

“We’re just getting started,” he said.