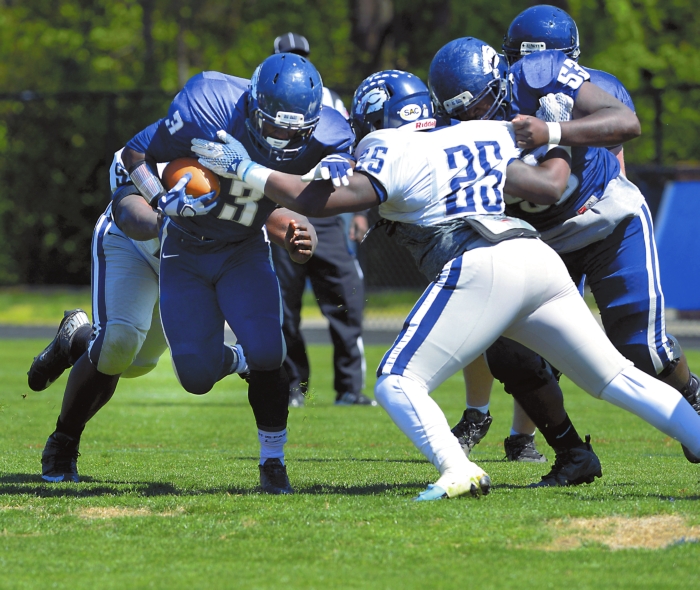 Wayne Hinshaw/for the Salisbury Post ... Running back David Burgess (3) is grabbed by linebacker Michael Peppers (25), who, in turn, is being grabbed by an offensive lineman during Catawba’s spring practice football game on Saturday at Shuford Stadium.

SALISBURY — It was three yards and a cloud of Bermuda grass at Catawba’s annual Blue-White Spring Game on Saturday.
The White team topped the Blue squad, 3-0 … yes, 3-0 — on a 37-yard field goal that was booted accurately into the wind in the first quarter by Lee Brackman.
Catawba head coach Curtis Walker, a former linebacker, wasn’t displeased with the shortage of high-powered offense.
“It’s always a defensive struggle in the spring,” Walker said. “And it may have been 50 degrees, but the wind turned it into a winter game.”
Swirling wind conditions made the forward pass an iffy proposition, so fans witnessed 15 throwing attempts and 66 gallops into the line. Some of the plays that had to be recorded as rushes were actually aborted pass plays that turned into scrambles or sacks.
Jamal Lackey, a returning starter at linebacker, produced two sacks, including a game-saver for the White team.
“Jamal is one of our best, always one of our leading tacklers, even though he doesn’t get a lot of acclaim,” Walker said.
Blue team quarterback Reid Carlton hit running back David Burgess with a long, fourth-down pass in the final seconds that would’ve been a game-changing touchdown, but Carlton was ruled to have been sacked by Lackey.
All Lackey had to do was touch him because Carlton was wearing one of the no-contact green jerseys sported by the QBs (except for Joseph Dress) as well as proven defensive backs such as Case Woodard and Jeremy Addison, who are recovering from surgeries.
The Blue team had two sacks, including one by returning All-America linebacker Kyle Kitchens, who was credited with three tackles for loss.
Kitchens looked great and isn’t about to rest on last season’s laurels.
“It’s 2016 now, and we haven’t done anything yet this year,” Kitchens said. “Most of our defense is going to be back, but we’ve still to come out every day and prove ourselves.”
Mike Sheehan, the returning starter at quarterback, directed the only scoring drive. He saw limited action, completing two passes for 11 yards and running five times for 19.
“We already know what Mike can do,” explained Walker, who was more focused on evaluating the progress of backups Carlton and Dress.
Dress is a hard-nosed athlete and is a combination quarterback/running back. He carried 19 times for a net of 39 yards.
The guys who really got a workout Saturday were White running back Eamon Smart (21 carries, 90 yards) and Burgess, who carried 16 times for 76 yards.
“I liked it,” said Smart, whose 30-yard burst set up Brackman’s field goal. “It was great experience and carrying the ball that much was good for conditioning.”
In 2015, Smart was Catawba’s fourth-leading rusher behind 1,000-yard senior Cary Littlejohn, Burgess and Sheehan, but he’ll be counted on heavily next fall. Smart was considered a recruiting gem when Catawba landed him out of Florida, but his opportunities have been limited.
“We kind of let it leak to Eamon that the coaching staff was looking for improvement and was looking forward to seeing what he could do today,” Walker said. “He ran with a chip on his shoulder and he found a groove.”
Burgess, when healthy, has been outstanding. Catawba doesn’t have any worries that he’ll be their speed guy this fall.
“We know what David can do outside,” Walker said. “He showed today what he can do between the tackles. He made nice cuts. He made some people miss in a confined space.”
Walker also was delighted with the performance of defensive lineman Trevor Bembry, who has made a storybook rise from walk-on to starter and is now on scholarship. Walker had praise for the offensive linemen, in general, as well as for Dress and defensive lineman Jordan Hemingway.
Walker’s three seasons have been 6-5, 6-5 against a tougher schedule, and then last year’s breakout — 9-3, seven wins in a row, a SAC title and a playoff berth.
“We’ve gotten better ever year, and a SAC championship and a playoff berth are the standard that we’ve set,” Walker said. “I remember Coastal Carolina baseball coach Gary Gilmore telling me that every year you must outdo what you did the year before. So we’re looking to do more than we did last year when we lost in the first round of the playoffs.”
Catawba’s schedule is fierce. Powerhouse West Georgia is still on it. Winston-Salem State replaces Davidson. That’s going to be a much more challenging game.
The Indians appear to have the right mindset moving forward.
“Sure, it’s a great feeling to be able to come out here today as the defending SAC champs,” Burgess said. “But we can’t go into a new year feeling comfortable. We’ve got to stay just as hungry if we’re going to eat like we did last year.”
•••
NOTES: Catawba got a scare when starting center C.J. Cain (Carson) went down with an apparent left knee injury, but Cain and Walker are confident he’ll be OK. .. Michael Mosley recovered a fumble for the White team. … Former East Rowan star Joshua Moses had a sack and former East speedster Donte Means, making a comeback from a devastating injury, caught a pass. …Thirty incoming recruits were in attendance. … Carlton was 4-for-9 passing for 52 yards. … Jared Lee had two pass breakups.