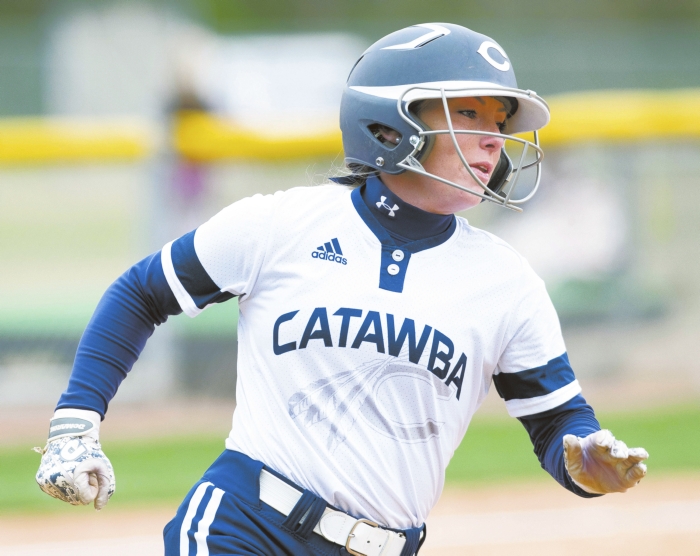 JON C. LAKEY / SALISBURY POST... Catawba’s Taylor Adams is shown above running to first base during a game with Brevard on March 19. Yesterday, Adams had the only RBI in a 1-0 win over Mars Hill. Catawba also won the second game on Saturday, 7-2.

SALISBURY — Neither snow nor rain nor heat nor 20-mile per hour winds can stop Catawba pitcher Carley Tysinger from the swift completion of her appointed rounds.
If Tysinger sounds a lot like the U.S. Postal Service, it’s because the record-breaking senior delivers nearly as frequently. She fired 173 pitches at Whitley Field on a blowing-in-the-wind Saturday, struck out 20 Mars Hill Lions and led Catawba’s softball team to a 1-0, 7-2 South Atlantic Conference doubleheader sweep.
“I’m used to pitching two games, and I always come to the field telling myself, ‘Let’s throw two today,'” the 5-foot-4 ace said. “If I get tired, I work through it.”
The Lions, like the rest of SAC, are tired of seeing Tysinger. She bumped her season record to 22-5 and raised her career strikeout mark to 1,218. That’s in the top 10 all-time in NCAA Division II.
“Records never stay there forever, someone always comes along and breaks them,” Tysinger said. “But they do mean something to me because I’ve worked so hard to get here.”
Catawba (29-10, 13-1) moved into sole possession of first place in the SAC on Saturday when Lenoir-Rhyne (35-9, 12-2) split two games with Anderson.
The opener was a tense struggle as Mars Hill hurler Shelby Culler matched zeroes with Tysinger for five innings.
“A scoreless game wasn’t something new,” Tysinger said. “I knew what I needed to do. That was to hold them until we could score.”
Catawba produced the decisive run in the sixth. Kristen Stinnard slapped a single, swiped second and moved to third on Katherine Shumaker’s sacrifice bunt. Stinnard scored when Taylor Adams lined a sharp single to right field.
“I’m coming out of a slump, and I’ve got my confidence now,” Adams said. “I’m finally watching some hits fall in.”
Catawba settled the second game quickly, banging out five hits and scoring four times in the first inning against losing pitcher Sydney Elkin.
Caroline Turner’s infield hit started the big inning. Shumaker’s one-out triple put Catawba on the board. Adams’ RBI single made it 2-0. Morgan Brann’s double to left-center put two runners in scoring position, and senior shortstop Gina Gerone whipped a double down the left-field line for a 4-0 lead.
“When it’s 4-0, and Carley’s pitching, it’s kind of deflating for the other team,” Adams said.
Gerone wasn’t swinging the bat well against Lenoir-Rhyne on Tuesday, but she found a groove on Saturday.
“I felt like myself today,” Gerone said. “We wanted to get a lot more runs in the second game.”
Carson graduate Lacee Hunsucker relieved in the circle for Mars Hill, got the Lions (11-20, 5-9) out of that first-inning jam and also pitched the second, third and fourth.
She kept the Indians quiet until a three-run fourth. No. 9 batter Lynnsey Taylor doubled, and Turner smacked a long single off the fence to make it 5-0. Stinnard’s infield hit led to another stolen base, and a throwing error on that steal allowed Turner to score from third. Then Shumaker’s sac fly pushed the Indians’ lead to 7-0.
Catawba’s defense had a good day. Gerone started a double play in the fifth and was in the middle of a 1-6-3 twin killing after a leadoff single in the seventh.
“We practice those double plays all the time, but we haven’t had very many this year,” Gerone said with a laugh. “It was nice to actually get some in a game.”
Tysinger was one out away from back-to-back shutouts when she allowed a two-run homer by Ellen Tillman in the seventh. That homer lifted her SAC-leading ERA to 0.79. She also owns a league-leading 276 strikeouts.
“We’ve got a lot of faith in Carley,” said Gerone, who has played behind her for four years. “Even if we can only score one, we’ve got confidence it’s going to be enough.”
Catawba’s offense finished the second game with 11 hits and produced 17 in the doubleheader.
“We fell short of our goal of 20 hits,” Gerone said. “If we get 20 in a doubleheader, we don’t have to run hills. Not having to run up hills is great incentive to hit.”
The ladies who play softball for Catawba will have to run more hills this week, but they may have a run that’s a lot more fun in their future.
“It was a challenge today, especially the way the wind was whipping around and changing directions,” Catawba coach Nan Whitley said. “Carley had to hold them at bay a long time in the first game until we could scratch out a run. In the second game, we got the bats going.”