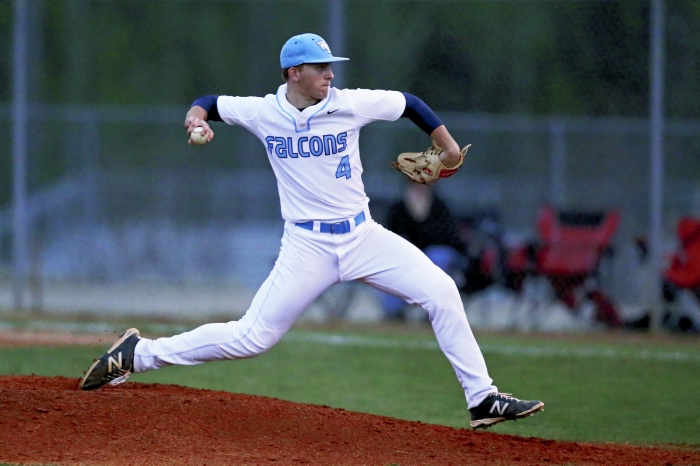 James Sipes/for the Salisbury Post... West Rowan’s Austin Love fires a pitch toward the plate during the Falcons’ 10-0 rout of Robinson on Friday night in Mount Ulla. Love did not allow a hit over five innings of work and struck out 12 batters.

MOUNT ULLA — Austin Love had good velocity, but the UNC commit’s curveball was his best friend in Friday’s 10-0 South Piedmont Conference win against visiting Robinson.
“Austin struggled a little bit in the first inning, but then he settled down between the first and second innings,” West catcher Trevor Atwood said. “After that, he was really good, mixing his pitches up, hitting corners. He was hitting the outside corner a lot.”
Love, who fanned 12 in a five-inning game, found a consistent arm slot and release point in the second inning. He was credited with a no-hitter on the scoreboard and in the West scorebook.
Robinson’s speedy Michael Young stroked a ground ball to the right side in the third inning that Robinson coach Damon Whalen felt should’ve been ruled an infield hit.
West scored Young’s bouncer as an error on first baseman Jonathan Luther.
“That first hit has to be clean,” West coach Seth Graham said. “And if Luther fields that ball, he’s out.”
Either way, Love, a junior right-hander, dominated, and the Falcons won for the 10th time in a row. Those two things weren’t disputable.
West (14-2, 9-1) stayed tied for first in the SPC with Carson. The Falcons haven’t been beaten since an ugly, 11-0, home loss to Carson on March 11.
Love didn’t throw strike one to a lot of hitters, but he was able to snap off curveballs for quality strikes in 1-0 and 2-0 counts. In one instance, he threw a curve for a strike on a 3-0 count.
“Kudos to Austin Love,” Whalen said. “He was able to throw his curveball for a strike any time he wanted to, and when you can do that, you’re going places. He’d get behind a hitter, but he’d throw a curveball for a strike. That would get him back in rhythm to get his fastball over.”
Love said he’d never thrown a no-hitter, at least not one that he could remember.
“The curve was the key pitch for me,” Love said. “I threw some when they weren’t expecting them and they were off-balance.”
Brandon Walton led West’s offense. His three-run homer to right-center in the first inning allowed Love to take the mound for the second with a lead.
“We’d faced that same pitcher (Justin Bundy) the first time we played them, so I knew we’d see a lot of fastballs and I knew I had to swing quick,” Walton said. “He threw a fastball right where I like it. That’s the first one I’ve hit this year than I knew was gone as soon as I hit it.”
Walton, a junior third baseman playing his first varsity season, is batting .426 with three homers and a team-leading 18 RBIs.
“I said before the season that if Walton had a great season than so would West Rowan,” Graham said. “He’s doing well, getting a lot of big hits for us.”
Lee Poteat had the big hit as the Falcons scored seven runs in the fourth to transform a tense game into a mercy-rule blowout.
“We played good baseball for three innings,” Whalen said. “But then we let our emotions get the best of us, and baseball will humble you in a hurry.”
After Poteat’s bouncing, two-run single up the middle made it 5-0, a wild pitch made it 6-0. Kacey Otto delivered his 17th RBI of the year with a well-hit sac fly for 7-0. Run-scoring hits by Walton and Atwood made it 9-0. Caleb Link’s RBI groundout pushed the tally to 10-0.
“Robinson put two good arms on the mound, but I like my team,” Graham said. “Guys aren’t just going up there hacking, they’re going up their with a plan, and they’re seeing a lot of pitches. We’re also running the bases aggressively, and that was a factor. Their starting pitcher had faced us. It probably was in the back of his mind that we were going to be running. He was trying to be extra-quick to the plate. That may have helped us get pitches to hit.”
West had good at-bats and ran the bases well. Graham said the Falcons need to clean up a few things in the field, but the defense almost had a night off. Love didn’t allow many balls to be put in play.
Robinson (6-9, 4-6) beat Carson in the recent F&M Bank Classic at Intimidators Stadium, so it’s a better team than it looked like on Friday.
“Whether it’s Nolan Ryan, David Price or Austin Love out there on the mound, it’s still 60 feet, 6 inches, and you’ve still got to play the game,” Whalen said. “We let this one get away from us quickly, but it’s not going to define us. We’ll come back strong next week.”
•••
NOTES: SPC teams will play three league games next week. West Rowan hosts Northwest Cabarrus on Monday. Robinson is at Central Cabarrus on Monday … Love has an ERA of 1.48 and has fanned 54 in 33 innings.