Your vote: ‘None of the above’ a popular choice 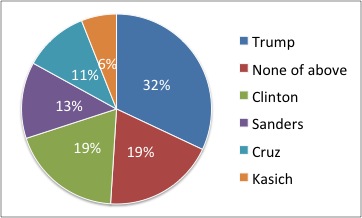 Salisbury Post poll: Who do you want to be the next U.S. president? Poll conducted March 2-April 5, with 2,207 responses. This poll is not scientific. Vote on polls at www.salisburypost.com.

Not a presidential election goes by without some people saying they don’t like any of the candidates, and they wish they could vote for “none of the above.” The wish seems extraordinarily apt this year, though, with the Republican race dominated by a flamboyant billionaire and the Democratic race coming down to a former first lady and a senior socialist. As Bruce La Rue of Mount Ulla said in his My Turn column on March 28, the 2016 race for the White House is “possibly the worst case of electile dysfunction ever in the history of presidential politics.”

Back in early March, when the Republican field got down to three, the Post asked online readers which of the remaining candidates they would like to see elected president: (in alphabetical order) Hillary Clinton, Ted Cruz, John Kasich, Donald Trump or Bernie Sanders?

Trump came out on top, getting 706 of the 2,207 votes cast in this very unscientific poll, or 32 percent. Virtually tied for second place at 19 percent were Clinton and “none of the above.” The “none” votes actually outnumbered Clinton’s by 10, though, 421 to 411. All this time we thought Sanders was her chief competition.

Speaking of Sanders, he received 295 votes, or 13 percent. Next came the Republican who seems most able to give Trump a run for his money, Cruz, with 247 votes, or 11 percent. John Kasich, the Republican candidate who refuses to quit, came in last in our poll with 127 votes, or 6 percent.

What this all means is anybody’s guess. Online polls skew toward younger voters, and Rowan County skews toward conservative Republicans. If you combined the candidates by party, Republicans fared better with 49 percent of the votes to the Democrats’ 32. But what about the none-of-the-above voters? That option won’t be on the ballot come Election Day.