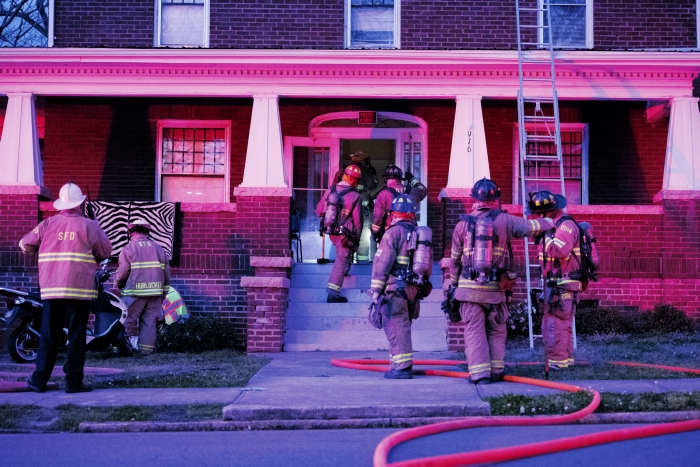 Firefighters investigate the cause for the fire that started in the basement of the boarding house at 916 West Horah Street in Salisbury on Monday evening. Allison Lee Isley/Salisbury Post

John Geter saw smoke coming from a basement vent Monday at the West Horah Street boarding house where he’s lived for the last year and three months. He tried to put out the fire with an extinguisher, but was overcome by smoke, he said.

Geter said he saw smoke coming from the hallway and went to the back side of the home to the kitchen to retrieve a fire extinguisher. The fire began around 7:30 p.m. He kicked through the basement door, but made only a big enough hole to squirt a little foam into the room. He said he had to step away because of the smoke.

“The smoke was too heavy. There were flames on the left side of the building,” Geter said.

Fire Chief Bob Parnell said this was a one-alarm fire, but for a structure fire within the city, all of the Salisbury units automatically respond as do their two mutual aid departments — Franklin and Granite Quarry fire departments.

He said there were no injuries reported and the power meter was removed from the property.

About an hour after the fire occurred, firefighters continued to put out hot spots inside the structure, which residents said was divided into 12 apartments.

Parnell said there were two firefighters who had to negotiate their way through the basement in order to get in and out of it as they searched for any possible occupants inside. No one was inside the basement apartment.

Billy Everhart said it was his basement apartment where the fire is believed to have started. He’s lived at the boarding house for over six months, but says it’s been about three months since he’s complained about what he calls “faulty” wiring.

He said he’s asked the property owner, Earl McMillon, to take a look at the wiring, but got no response.

McMillon, who was at the scene, said he doesn’t want to rush to judgment regarding the cause of the fire. He said he did not recall a conversation with Everhart about wiring but that if Everhart had told him about a problem, “I would have taken care of it.”

McMillon said he received a call about the fire. He said his concern was whether everyone had gotten out safely.

He estimates he’s owned the “apartment homes” for a little more than five years.

The building once operated as a hospital that served the African-American neighborhood around Livingstone College. The home is known historically as the Hercules Smith House, and was built in 1924.

Geter and more than a dozen others who were huddled next door to the brick home at 916 W. Horah St., were displaced by the fire and were being assisted by the Hanford Dole Chapter of the American Red Cross.

No cause has been determined. The Salisbury City Fire Marshal’s Office is investigating.