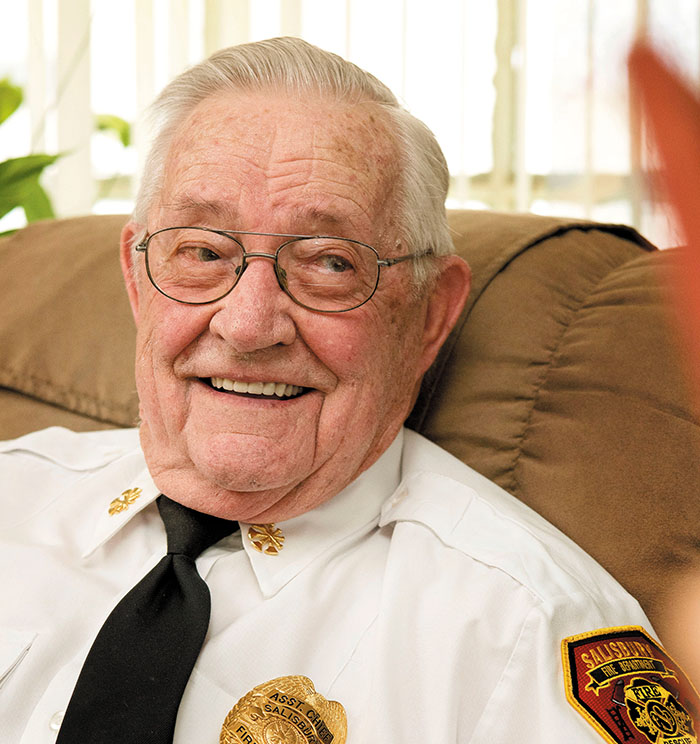 Marvin Yost, 92, retired from the Salisbury Fire Department in 1984 after rising to the rank of assistant chief. JON C. LAKEY / SALISBURY POST

1. Because the fire chief was in Indianapolis at a conference, Assistant Fire Chief Marvin Yost, now retired, found himself in charge during one of Salisbury’s biggest fires. Which fire was it?

B. The Blackmer House fire

2. How many Republican candidates have filed for the newly redrawn 13th U.S. House District, which includes all of Davie and Davidson counties and parts of Rowan, Iredell and Guilford counties?

3. It was announced this week that proceeds from Tilley Harley-Davidson’s sixth annual Biker Blues & BBQ Rally Sept. 16-17 will go to what organization?

4. Promats of Salisbury has recently provided one of its products to 12 Major League Baseball teams. What is it?

B. Workout mats for team clubhouses

A. For continued restoration work of the Benchwarmers property

B. For tearing up the brick street surface and replacing the brick with a different kind of paver

C. For the filming of a movie

D. For improvements to the storm drainage system

6. Kannapolis City Council is considering whether the city should participate in a major “demonstration project” for downtown development. Which of these things would the proposed project not include?

7. What has Salisbury Pediatric Dentists been providing for free to 200 students in Rowan-Salisbury Schools?

A. Sealants for their teeth

8. Livingstone College’s School of Hospitality Management & Culinary Arts — the former Holiday Inn — had a bothersome issue this past week for students who live in the dormitories there. What was the problem?

A. Big sinkholes in the parking lot

B. An alarm system that wouldn’t shut off

9. Justin Dionne, managing artistic director at Lee Street theatre, will be leaving that position this summer. What does he intend to do?

A. Spend a year studying Shakespeare in London

B. Relocate to Savannah, Ga., where he will manage a community theater

C. Take a supporting role in a new television drama based on the life of Thomas Edison

10. The Granite Quarry Elementary School Student Government Association raised $1,500 and spent a recent Saturday working on a special project at the school. What did the SGA do?

A. Restored the school’s basketball courts

B. Built handicapped ramps at all of the school entrances

C. Repainted all of the school bathrooms

Quotes of the week: ‘Never had anything like this happen’

My Turn, Evelyn Uddin-khan: Guns and politics do not mix