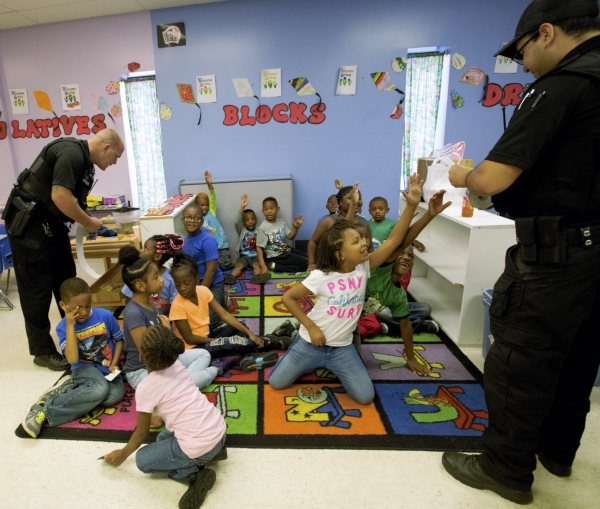 EAST SPENCER — January Williams sits outside her same Grant Street Apartment unit where she’s seen children run for cover amidst shootings and fights break out in the parking lot. But, she says, all of that has changed since she’s seen more of the East Spencer Police Department.

East Spencer Police Department has undergone restructuring since Chief Sharon Hovis took over following the April 2015 resignation of then Chief Baxter Michael. Some of the changes Hovis has made within the department include being more visible in the community. The apartment complex, formerly Weant Street Apartments, is one of those places where officers have increased their presence.

“Since they’ve been onsite, there’s less problems. I see them (officers) playing ball with the kids,” Williams said.

She’s lived on and off at the apartment complex since 2004, but returned two years ago. She said when police are in the complex, she feels safer.

Once she became chief, Hovis quickly began making some changes within the department, some of which have helped decrease crime. Some of the decrease in crime had begun when Hovis was a lieutenant for the department, she said, but has continued to take off with changes made to staff and the way officers police the community.

“The mayor and board have allowed me the growing room to make improvements,” Hovis said.

Prior to becoming chief, Hovis joined the department in early 2014 as a part-time officer and then became full-time in December of the same year.

According to East Spencer Police Department data, from 2012 to 2015 the overall crime has decreased by 47.4 percent.

Hovis was able to change the department from 14 part-time officers to six full-time officers and six part-time officers. She hired all new officers, some of whom are from the Davidson County and Mecklenburg County area, all of whom have at least four to eight years of law enforcement experience.

“I’ve been able to hire proactive police officers who are community policing consistently,” she said.

Hovis said there has been an issue in the past with officers who weren’t proactive and who didn’t put themselves in the community.

Hovis said there are some officers who, like January Williams said, get out and play ball with the children in the neighborhood. One officer even went above and beyond his duties when he paid for a bus ticket for a military vet trying to get home to Charlotte out of his own wallet.

“These are approachable officers,” Hovis said.

She said people have told her that in the past, they felt like they didn’t know the officers or the police chief.

Hovis said she also feels as though being a chief from the community she was raised in is also helpful.

The makeup of her department is also reflective of the community — men and women, African-American, white, and Hispanic officers.

“We are a more diverse agency now,” she said.

The police department helped develop a community watch and have gotten positive feedback from the community, Hovis said.

She said newer equipment helps officers do their job more efficiently. The police department has gone to E-citations, become certified in Taser use and upgraded their body cameras. Each officer and reserve officer places a body camera on their shoulder as they begin a shift.

On Thursday, East Spencer Sgt. D. Salgado and Officer B. Seagraves stopped by Kiddie Land Kindergarten in East Spencer and got a warm welcome by the staff and children.

The children clamored at the head of a classroom to get stickers from the officers, many of them shouting the silver badge shaped stickers made them junior officers.

Daycare Director Timika Peterson said seeing the officers is great because some children have the impression that police officers are bad.

Officers coming out to the Long Street facility gives the children, “a better understanding of what police officers do. They help us and protect the community,” she said.