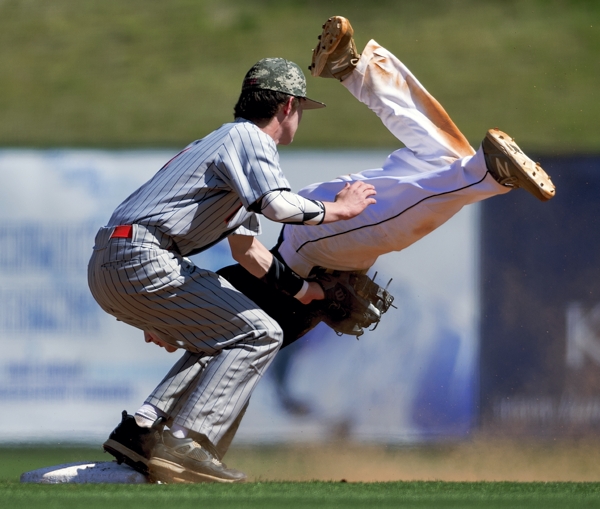 ALLISON LEE ISLEY/SALISBURY POST Lake Norman's Jackson Mead, 2, tries to jump over to second base at Carson's second baseman, Cameron Prugh, 1, tags him out during the third inning of the first game of the F&M Bank High School Baseball Classic on Wednesday at the Intimidators Stadium in Kannapolis. Mead was out. Lake Norman won the game 2-1.

Runs were at a premium in the 2-1 victory by Lake Norman as the Wildcats’ lefty Jake Kaufman and Carson’s big right-hander, Owen White, were pretty much locked in on the mound all day.

However, what fans would not have expected was to see nine outs on the base paths, including five by Carson that thwarted possible scoring opportunities in four consecutive innings.

The Cougars uncharacteristically ran themselves out of the fourth through the seventh innings.

The one that hurt the most may have been in that final frame, with Carson trailing, 2-0. Ben Shoaf led off with a double that chased Kaufman. Pinch-hitter Brandon Newton worked a walk off of reliever Jared Stubauer as Shoaf advanced to third base on a wild pitch.

Newton was promptly picked off first on a close call, that Carson coach Chris Cauble briefly argued with the umpire. Alden Blackwelder’s ground out plated Shoaf but the Cougars were down to their last out.

Cameron Prugh beat out an infield chopper to keep the hopes alive and leadoff man Michael Morrison then looped a single to right field, his fourth hit of the game. White walked on four pitches to load the bases.

Lake Norman coach Ty Wigginton made another pitching change, bringing in left-hander Gabe Kacenga, who struck out Brandon Mock to end the game.

“I felt like today was going to be a really well played game between two good teams and it was,” said Cauble. “But every time we kinda got something going, we’d do something dumb to take us out of it.

“I will say that I’m proud of our guys for fighting and coming back in the last inning,” continued Cauble. “We plated a run and still had the tying run at third and go-ahead run at second with our No. 3 batter (Mock) up, whose been money for us all year. If we had it to do over again, I’d put him right back into that situation.”

It was the second tough-luck loss for White (4-2), who was on the losing end of a 2-0 game against East Rowan on March 4. White pitched six innings yesterday, yielding just five hits against a good 4A squad, striking out eight batters and walking just two.

White also picked off two Wildcat runners at first base and catcher Ryan Bearden threw out two runners trying to steal second base.

Lake Norman touched White for a run in the second inning when Mock lost Sam Zayicek’s deep fly ball to left-center field in the morning sun for a double. Hayden Gido immediately singled to score Zayicek.

That 1-0 lead stood up until the bottom of the sixth inning when White walked Jackson Mead and the next hitter, Kacenga, tripled. White avoided further damage, stranding Kacenga by getting a pop out and strikeout.

“We heard that they had a kid with a good arm and he was probably who we’d see,” said Wigginton, who had a 12-year major league career. “And he lived up to it for sure. It was absolutely a good win, facing a very tough pitcher but somehow finding a way to scrap out a couple of runs against him.”

“Owen, he pitched well enough to win,” added Cauble. “The first run was off the fly ball that we lost in the sun and the second run, if we come up clean in the outfield and throw it to our double-cut relay, I think we’ve got him at the plate on that.”

Carson (8-3) had seven hits over the last four innings but managed just the one run, due to the base-running blunders.

Bearden took an ill-advised chance at trying to score from second base on a sacrifice and bad throw to first base, but was easily thrown out at the plate in the fourth inning.

Blackwelder was caught stealing in the fifth, and two Cougars, Mock and Grayson Whicker, were picked off in the sixth inning.

“We killed ourselves on the bases. Every time we’d get a leadoff batter on, we’d do something stupid,” Cauble repeated afterwards. “That’s things that we can correct, but during the course of a game against a good team, you can’t give them free outs.

“Our base-running mistakes were not typical of this team,” continued Cauble. “Usually, we don’t try to extend things as much and today, for some reason, we were just kind of out there in la-la land. But like I said, we’ll correct it.”

The Wildcats are now 9-2 and have won eight of their last nine games. Wigginton had high praise for his catcher, Chase Bishop, who had great throws on the pickoffs in the fifth and seventh innings.

“Chase really came alive and blocked a ton of balls in the dirt,” said Wigginton. “There should have been runners in scoring position all day long but he worked his butt off back there and did a heck of job for us. He’s always had a strong arm and good work ethic, everything you look for in a good solid catcher.