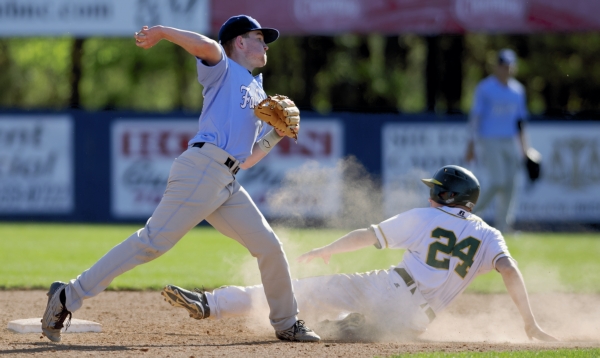 GRANITE QUARRY — Lowly regarded West Iredell is 1-12. Highly regarded West Rowan is 11-2.
But fans expecting a mercy-rule blowout in Monday’s East Rowan Easter Classic contest, left Staton Field somewhat shocked.
West Rowan was fortunate to win, 4-3, on a walk-off hit by Trevor Atwood. It was just a flyball down the left-field line, but it fell safely and scored pinch-runner Tommy Wilmot.
“It’s not always going to be easy,” West Rowan coach Seth Graham said. “It’s not a bad thing that we had to overcome some adversity. We haven’t gotten behind early all that much.”
With Bryan Ketchie and Austin Love starting the Falcons’ South Piedmont Conference games, they don’t get in a lot of holes. But they dug one Monday with Tyler Wheeler on the mound.
West Iredell scored all of its runs in the top of the first after two men were out. There were four straight hits off Wheeler, a burly junior right-hander who has been a pleasant surprise. One of those hits was a two-run double that Austin Huss smoked to left-center.
“Tyler got two quick outs and it was like he relaxed a little bit, and then he made some 0-2 pitches that were too good,” Graham said.
West Rowan, like most South Piedmont Conference teams, is a pitching-and-defense bunch. The Falcons are batting a modest .247 as a team and junior lefty masher Brandon Walton owns their only two homers.
So that 3-0 deficit was actually a challenging climb.
Wheeler helped out. Starting with the last out in the first, he retired 10 straight Warriors. That gave the Falcons a chance to recover. Caleb Link, making his first mound appearance in 26 days, took over for Wheeler in the fifth and went the rest of the way for the win.
“It had been a long time since I’d been on the mound,” Link said. “I knew my job was to keep us close and give us a chance. Atwood did a great job of calling pitches for me.”
West Rowan didn’t do much against West Iredell starter Tyler Williams for three innings.
The Falcons got on the board in the fourth after Walton singled to open the inning, and Atwood walked. West Iredell coach Randy Martin turned to his thin bullpen after the free pass. Sophomore Brandon Gregory relieved and threw good breaking balls. West Rowan got back to 3-1 when Walton scored on a wild pitch. Cody LaRue’s sac fly made it 3-2.
But Gregory was stubborn. He held the lead in the fifth.
Then he held it again in the sixth. He got two strikeouts and a groundout after West Rowan had runners at second and third with no outs. That’s when Falcon fans started to worry.
Lee Poteat started the seventh with the hit West Rowan desperately needed — a solid single through the right side. Brett Graham sacrificed Poteat to second base. Poteat is fast, and when Gregory bounced a breaking ball, he lit out for third without hesitation.
“That’s why Lee leads off,” Graham said. “It’s not just the speed, it’s the aggressiveness. He puts pressure on defenses.”
Catcher Nick Ward had little chance to get Poteat, but he threw wildly. Poteat sprinted home, and the game was tied at 3-all.
Kacey Otto grounded to first for the second out, and extra innings loomed. But then Walton whipped a sharp double into the left-center gap.
“I got the right pitch, the perfect pitch I was looking for, and I hit it hard,” Walton said. “We got down early, but we didn’t stop doing our jobs.”
Wilmot went in to run for Walton, and he sped across the plate with the winning run when Atwood’s towering fly fell near the line. West Iredell’s left fielder had the speed to get there, but he over-ran the ball.
“That’s probably a ball he catches nine out of 10 times,” Graham said. “But we’ll take it.”
Martin and the Warriors were saddled with their second walk-off loss of the tournament. They pushed East Rowan to the limit in Saturday’s first round.
“Our pitchers threw well, and we stayed in it all the way,” Martin said. “We’re getting better. The disappointment I had was we didn’t get down bunts. That played a big part in a tough loss.”
•••
West Rowan will send Austin Love to the mound today at 1 p.m. against the Greater Cabarrus Stallions. They are the only two undefeated teams in the tournament. … West Iredell battles Central Cabarrus at 7 p.m.