The robin in the window 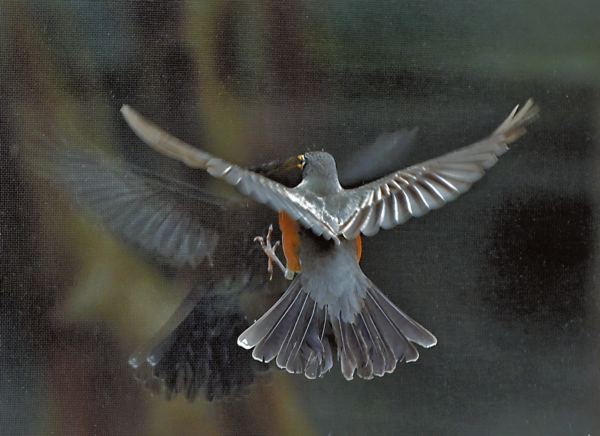 Maybe the robin fluttering at its reflection in a window at John Calvin Presbyterian Church was looking for love ... or a little crazy ... or maybe both. (Wayne Hinshaw/For the Salisbury Post)

Hey, it’s spring time, income tax time, an election year, the world is a bit crazy, so what would you expect a handsome robin to do?

What about jump into the glass of a church window and bang his head in frustration?

On Sunday while walking  into John Calvin Presbyterian Church, I heard a thump and another thump, and a bang at the fellowship hall window. There was this robin jumping repeatedly into the window glass. I went on to church not really knowing how to help the robin in his time of stress.

When I exited  nearly two hours later, he was still there banging his head away and still jumping at his reflection in the glass.  Thump, thump, thump!  After every three or four thumps, he would rest on the window frame and regain his composure.

I thought if I was like Barney Fife in the 1963 “Andy Griffith Show,” I could talk some sense into that bird.  You know Barney could talk to birds. After little Opie shot and killed the mother songbird with his new slingshot, leaving three orphans in the nest, it was time for some bird talk. The birds would chirp and Barney would chirp, “Feeling fine today” or “Here comes the cat.”

I couldn’t chirp to the robin because my wife might call the “funny wagon” and have me hauled off  to the “funny farm.”

I wanted to tell the bird, it was OK. He was a handsome bird, as robins go, with that bright orange chest. Certainly he was in good health to be able to keep jumping into the glass.

I figured with it being spring time, he must be lonely.  He must have thought that the good looking bird in the window would be a good mate for him. He was determined to  chirp love sounds to that other bird, if he could just get the other bird to listen.

The other bird must have liked him because when he jumped into the window at the other bird, that other handsome, good looking bird always jumped right back at him. Oh, the teasing that goes on in courtship can be hard on your head. Thump!

He took a break from thumping the window. He flew down about 5 feet from me and scooped up an earthworm and swallowed it in one gulp. He looked at me and flew back to window and started his banging into the window again.

At this point I determined that he was hopelessly in love or crazy, or maybe the two are the same. I don’t know. At any rate, he wasn’t going to starve to death after eating that  big, fine, fat earthworm, so I went on about my business.

Life in the Carolinas: Coffee and conversation in West…