An eagle has landed: Liberty and Justice proud parents at Dan Nicholas Park 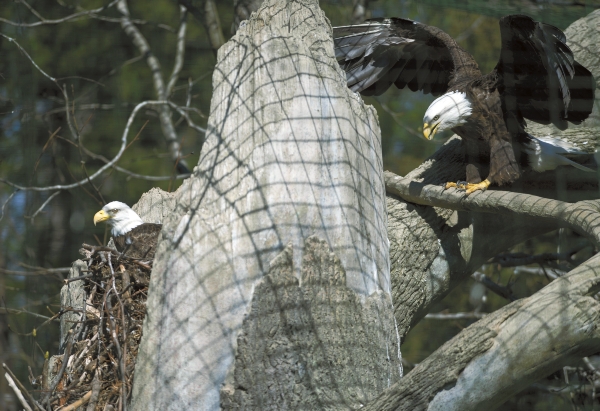 Justice, a male bald eagle, sits on the huge nest made of sticks to keep the young eaglet warm Monday while female eagle Liberty, right, reacts to a cameraman nearby. The pair of bald eagles at Dan Nicholas Park’s Rowan Wildlife Adventures succesfully hatched a chick after years of producing infertile eggs. Liberty and Justice took turns sitting on the eggs and continue to take care of the eaglet’s needs. Jon C. Lakey/Salisbury Post

SALISBURY — It took four years, but bald eagles Liberty and Justice have hatched their first chick at Dan Nicholas Park.

Nature Center Supervisor Bob Pendergrass said Monday the eaglet poked through his or her shell March 10. A week later, the park staff was able to get close enough and high enough over the nest to shoot a video of the little bird.

“We have had some reservations about going public, because there are all these things that could happen,” Pendergrass said. “But things are looking good so far.

“… Another eagle belongs to the citizens of the United States. It is something to share.”

Nature Center staff members have given Liberty (Mom) and Justice (Dad) all the room they need, so glimpses of the eaglet are still rare. But from all the movements the parents are making, Pendergrass is pretty sure the eaglet is surviving and no doubt getting bigger and stronger.

“When i go down there, all the eagles want to do is yell at me,” Pendergrass said, noting that’s probably another good sign.

The parents are brooding — not incubating any longer, but still keeping the eaglet and nest warm. They take turns with the nesting and the chick’s feeding. The eaglet will be taking larger pieces of food and growing to a full body size before even developing feathers.
[Article continues below video]

Liberty and Justice eat fish and rats, supplied by the park staff, so that’s part of the baby’s diet.

The eagles’ nest lies in the crook of large limbs at the Robert Lee Honbarrier Bald Eagle Habitat at Dan Nicholas Park. Again, visitors to the park are finding it difficult to get any good glimpse of the eaglet yet.

Liberty has laid two eggs for four years in a row. But the previous three years, the parents had never produced any fertile eggs.

This winter, as always, the eagles busily repaired their nest with sticks that the staff provided. By the first week of February, “we were convinced that two eggs were present,” Pendergrass said.

The park staff’s expectations were low, given what had happened in the three previous years. Liberty was making some unusual movements March 10 that caught a staffer’s attention. She was standing on the edge of the nest looking down into it and watching.

“We quickly decided to get a close check on things by climbing up to see firsthand,” Pendergrass said.

That’s when they saw the beak poking through the one egg in the nest. The other egg was gone. “We believe it was infertile and the parents disposed of it,” Pendergrass said.

Since the eaglet appears to have survived rain, cold, sun and heat — “and most importantly, a busy weekend at the park,” Pendergrass said — the Nature Center decided to go public with the news of the chick’s arrival.

No name has been attached to the eaglet yet.

“We also wanted to make people aware of what happens next,” Pendergrass said.

The eaglet will not be at Dan Nicholas Park for long.

Because of the protections afforded by federal law, the park will not be allowed to keep a bald eagle that is fully able to function in the wild. Actions must be taken so it can be prepared for release.

How that specifically plays out will be up to the U.S. Fish and Wildlife Service, Pendergrass already has informed the agency of the birth of the eaglet.

Typically, at about eight weeks of age when the bird is self-feeding on food brought to it by the parents, it is placed into a structure called a hack tower, near waters that provide suitable hunting territory.

Pendergrass said the Nature Center already has been in touch with the Carolina Raptor Center in Huntersville, which has a hack tower for its own captive eagles.

“They have graciously agreed to partner with us,” Pendergrass said.

But again, it will be up to the U.S. Fish and Wildlife Service as to where the Dan Nicholas Park eaglet will go.

Pendergrass said young eagles are placed in a hack tower and locked in with bars so they can view their new territories. As the days go by, they finish growing the feathers and developing the muscles needed for flight.

“They are fed daily in such a way that they do not see humans feeding them, until one day, when they are almost able to fly, the doors are opened,” Pendergrass said.

Food continues to be provided, as the eagles gradually learn to hunt, scavenge and feed themselves in the wild.

Liberty and Justice are both 13 years old. They arrived at Dan Nicholas Park in 2006 from a rehabilitation center in Florida. Both are disabled and could not survive in the wild, but they are still highly regulated by the U.S. Fish and Wildlife Service.

It was actually a surprise when Liberty and Justice started breeding and Liberty laid eggs for the first time in 2013. The birds’ injuries severely test any instincts they might have for aerial courting.

Somehow they showed an American, can-do spirit — and the fourth time was a charm.