Susan Shinn: ‘Too much fear going on’ 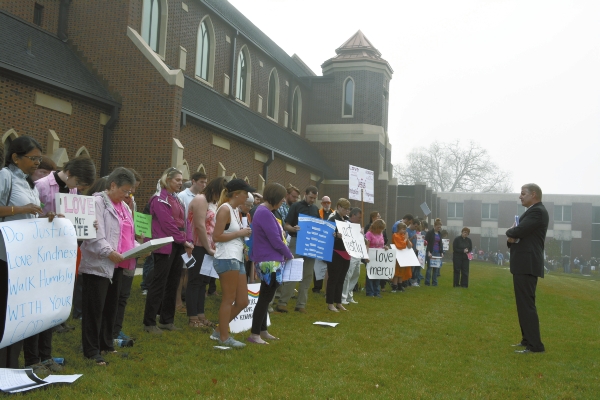 Driving home from the political rally in Hickory on Monday — in the blissful silence of my car — I reflected on the presidential campaigns I’ve covered on and off since 1988.

A whole slew of Democratic candidates — seven, to be exact — came to Chapel Hill during the fall of my senior year at the university. President George H.W. Bush appeared in Burlington in 1992 on a whistle-stop tour via train. The Gores and the Clintons blew through on their bus tour. In 2008, Bill stumped for Hillary in Salisbury. By sheer coincidence, that was the same week George Clooney came to town to promote a movie he’d shot here. That may well have been the most exciting few days of my newspaper career.

At all of those events, there was a festive atmosphere. Patriotic or rock music played, folks tossed beach balls through the air, and everyone was in a good mood.

The rally I attended this past week was completely different.

There was an electric charge in the air — a negative one. You’ve read over and over: people are angry. Yes, yes they are. It’s not a matter or Democrat versus Republican, or liberal versus conservative. The nation is polarized in a way I’ve never seen during the past 30 years and past election cycles. The next president — whoever he or she may be — faces the daunting task of reunifying the nation. I have no idea how to attempt this, but after seeing what I saw last week, I realize more than ever that’s what needs to be done.

Monday’s appearance at Lenoir-Rhyne University by Donald J. Trump drew dozens of  Lutheran ministers from all over North Carolina who came to protest the event. Here’s what some of the pastors with Rowan County connections had to say:

Bishop Tim Smith, N.C. Synod, ELCA: “The risk of saying nothing is more dangerous than saying something. I do believe this platform and this candidate are antithetical to what the Gospel calls us to do.”

The Rev. Matt Smith, pastor of Holly Grove Lutheran Church, Lexington: “We’re not in the business of telling people how to vote. Our job is to help people be followers of Jesus, and Christian disciples.”

The Rev. Carol Yeager, Friendship Lutheran, Taylorsville: “I want to make sure that L-R is about inclusion and loving our neighbor, and living out Christian values. As a member of the N.C. Synod and the clergy, it was incumbent on me to be here.”

Yeager’s husband, the Rev. Greg Yeager, is a former pastor of St. Mark’s Lutheran, China Grove. He was also present.

The Rev. Phil Thorsen, St. Mark’s, China Grove: “You can have a peaceful demonstration and hold up values of justice and inclusion. There’s just too much fear going on right now. We are here to advocate what we’re for, not what we’re against.”

The Rev. Jeff Lindsay, Kannapolis native and pastor of St. Luke’s, Conover: “I’m here to pray for everybody here, for their safety, their well-being, and their safe return home. That’s my purpose.”

The Rev. Dick Little of Concord: “The hatred that we see and the language is a concern. I’d like to see the tenor of the conversation change to something of more substance. We’re like a symphony orchestra — we need to play in harmony with each other rather than in opposition.”

Little is a retired pastor whose first call was the former St. David’s, Kannapolis. I thought his quote was beautiful and told him so. He smiled, and that smile was one of many that broke the tension during an otherwise pretty tense day.