Accepting the Challenge: Local trainer to appear on TV show 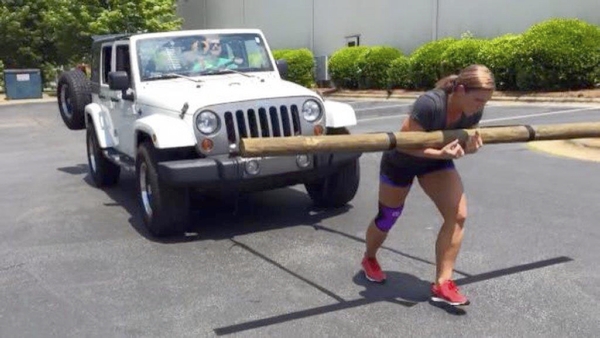 Jessica Stamper trains by pulling a Jeep and driver in the parking lot at The Forum. Submitted photo

Forum personal trainer and group instructor Jessica Stamper is known for doing things a little “out of the box.” She loves obstacle course runs and incorporates lifting tires, chains and swinging a sledgehammer into her workouts and even pulls a Jeep around The Forum’s parking lot. Stamper had heard of Stone Cold Steve Austin’s Broken Skull Challenge television show on CMT where athletes compete against each other, often in some of her favorite workouts, and thought it was worth a shot to apply.

Stamper contacted the show during its first season in 2014, along with about 10,000 others. She didn’t hear anything back until spring of 2015. A producer called from Los Angeles, setting off a chain of interviews, some of them on skype. Stamper was required to submit photographs and videos of her workouts and had to complete a background check.

Stamper then was required to fly alone to Los Angeles for a final interview and some serious medical testing. The medical testing included a heart stress test, an echocardiogram, a blood pressure check and some blood work.  Stamper said, “All of this was done in a very secluded doctor’s office, sort of a doctor to the stars. There were pictures of famous people on the walls.” She was then sent to her hotel room to wait for notification that she had made the show or if she would be sent home.  Stamper, from New London, did make the cut as one of eight competitors and prepared for competition and filming the next day.

Women compete on the show every other week, with the winner getting $10,000. The winning time from that week stands in the following weeks until a new champion is faster. Men compete in the same fashion. Stamper said that one of the male winners from last year collected $10,000 every other week because no one could top his winning time. Various challenges, relays, a combative segment and the Skull Buster Obstacle Course are included in the competition.

The show is depicted as occurring on Stone Cold Steve Austin’s Broken Skull Ranch near Tilden, Texas, but Stamper’s portion was filmed in Los Angeles in an area designed to look like the ranch. Austin was a college football player who found success in various levels of professional wrestling and also as an actor.

Stamper said, “It was really cool to meet Austin. There were lots of different kinds of athletes, but we were secluded from each other. They didn’t want us to become friends or even know about the others’ backgrounds. In fact, the show promotes a dislike among competitors.” Competitors come from various athletic backgrounds, including Crossfit, Spartan Racers, Tough Mudder, mixed martial arts, pro wrestling and others.

The first-round matchups are chosen at random. The contestants are eliminated in a series of head to head competitions with names such as Pain Train, Pulveriser, Ass Kicker, Ball Breaker and Barn Burner. The final two contestants face off in a two-part challenge, with the first part solely designed to wear the participants down. Those two contestants then proceed to the “pit” and proceed to wrestle, with the goal of forcing their opponent out of the ring.

The last one standing inside the ring faces a tough obstacle course called the Skullbuster, after a day’s rest. The Skullbuster is a half-mile long and includes 10 obstacles. Some are classified as “restart elements,” meaning that the contestant must redo the obstacle if not finished or done incorrectly.

Austin explains the various challenges to the contestants and viewers, then encourages the contestants while providing a sort of play by play analysis throughout the show.

CMT, or Country Music Television, plans to air Stamper’s show on Sunday, April 10, at 8 p.m. Stamper is legally bound to not discuss what happened on the show and how well she did until after her segment airs. She said, “Who knows how they will edit it? We were there for four days, and it is all going to be shown in an hour.”

Licensed in cardio kickboxing, CrossFit, Body Pump and more, Stamper has been at The Forum for five years. She leads group exercise and does personal training and also works the front desk. When Stamper found out that she was being flown to California for the competition, only her employers and family were allowed to know. She said, “I did watch the show each week with my daughters, Kendall and Karlye. They wanted to know if I could do this thing or that thing. I was motivated and had to step up my training. “

The show was filmed in a desert environment, warm and dry with plenty of sand. Stamper said, “It was somewhat of a letdown when it was all over. I would love to go back and do it again, especially knowing what I do now.”

Forum General Manager Rayna Gardner said, “Jessica is one tough girl. Her workouts will kick your behind in ways you didn’t think possible. She is perfect for this show and I know she will do well. We just hope she doesn’t forget us when she is famous.”

Summing up her thoughts on preparing for and competing on the show, Stamper said, “For me, having this opportunity was proof that you can work for something, accomplish goals, face fears and grow as a person. Being on the show was an amazing experience that also showed my daughters not to fear anyone or anything in life. Have the confidence to try anything!”