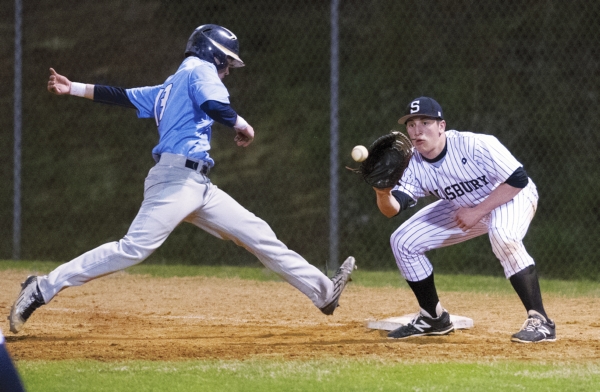 ALLISON LEE ISLEY/SALISBURY POST ... West’s Brett Graham (13) leaps back to the bag ahead of a pickoff throw to Salisbury first baseman Chandler Lippard during Thursday night’s high school baseball game at Salisbury. Graham scored twice for the Falcons, who won the game, 11-0.

The Falcons needed only 90 minutes and five innings to brush aside the hosts, 11-0.

“We just came out and took care of business,” third baseman Brandon Walton said after West (6-2) scored six runs with two outs and mercy-ruled the Hornets for the second time this month. “We put the ball in play and got good pitching.”

That’s all it took for winning pitcher Tyler Wheeler to earn his second victory of the season. The junior right-hander served up a garden-variety assortment of fastballs, curves and occasional change-ups to quiet Salisbury (2-4).

“Tyler’s a guy we didn’t expect to play this year,” said West coach Seth Graham. “He didn’t play last year, but right before the season he decided he missed it. He just showed up the first day of practice and has been competing ever since. He gets himself into trouble and then competes to get himself out of it.”

Wheeler fell into that pattern almost immediately. With the Falcons holding a 1-0 lead, he watched Salisbury load the bases with one away in the bottom of the first inning. He escaped unscathed when John Yang’s shallow fly to right field dropped in for an apparent base hit — until outfielder Timmy Wilmot fired the ball home for an unusual 9-2 force-out at the plate.

“We were holding the runner (Alex Yang) at third, waiting for a tag,” Salisbury coach Mike Herndon explained. “It fell in and they threw him out. In baseball, you’ve got to have three things: good pitching, timely hitting and good defense. We just couldn’t get the timely hit tonight — and they did.”

Wheeler, who scattered five singles in four innings, got out of the jam when designated hitter Alex Link grounded out to end the inning. Meanwhile, the Falcons, who scored in every inning, nourished its lead in the second on a two-out, two-run single to left field by catcher Lee Poteat.

Salisbury stranded two more base runners in the last of the second frame and another two in the third, when Wheeler navigated his way through a two-on and one out mine field. “My main focus was to throw strikes and trust the defense behind me,” he said. “I worked to locate my fastball and get them to hit it on the ground.”

West went up, 4-0, in the third inning against losing pitcher Harrison Smith when Walton (2-for-4, two RBIs, two runs scored) smoked a run-scoring double to left-center. Three batters later, teammate Jonathan Luther whipped another double — this one against Salisbury reliever Will Steinman — that delivered two more runs. In the fourth inning, Walton corked an RBI-double to deep right field that made it 7-0.

“(Steinman) threw it right where I like it,” Walton said with a post-game smile. “I squared it up and did my job.”

West secured the win in the top of the fifth inning when Kacey Otto double home Mykal Berger with the Falcons’ 10th run. Wilmot walked and crossed on an error to close the scoring. Luther relieved Wheeler and retired the Hornets in order in the bottom of the fifth, the game’s only 1-2-3 inning.

“We had a pretty good eye at the plate,” Graham said after West collected seven hits, including four doubles, and drew eight walks. “We didn’t help them out by chasing bad pitches. We put pressure on their defense and just played our game.”
NOTES: West (4-1 in SPC games) returns to league play tonight when it hosts East Rowan (6-1, 4-1). Salisbury opens its Central Carolina Conference season next Tuesday night (7:00) at home against East Davidson.