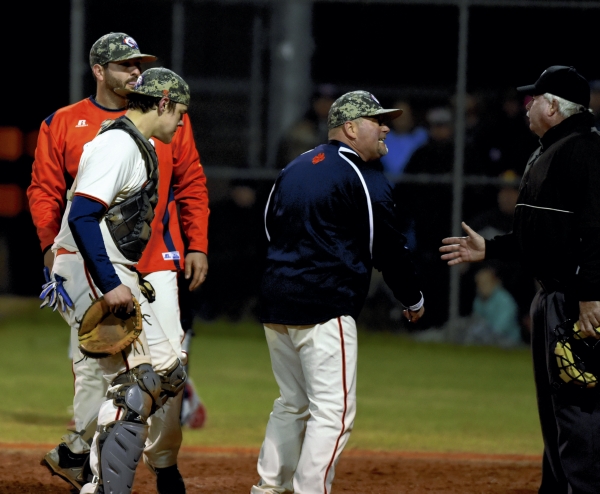 LANDIS — Carson’s Chris Cauble logged his 295th career win as a Rowan head baseball coach, tying long-time North Rowan coach Bill Kesler for the most in county history.
The win wasn’t exciting or pretty, but Cauble, who recorded 136 wins at West Rowan before securing 159 at Carson, will take it. The Cougars scored nine times in the first two innings in Tuesday’s SPC contest and routed error-prone South Rowan, 12-1.
“We hit it well and we pitched it well,” Cauble said. “But there’s a still a lot we can work on. We walked some. We made too many errors.”
On the mound for Cauble’s historic win was sophomore lefty Maddux Holshouser, the son of Jeff Holshouser. Jeff Holshouser and Cauble frequently formed the battery for the 1984 Rowan County American Legion team’s state-championship squad.
Jeff Holshouser was a fan of Hall of Fame right-handed pitcher Greg Maddux, which explains how his son got his name. Maddux was probably destined to be a hurler from the crib.
“But my dad made me a left-hander,” 15-year-old Maddux said with a smile.
Holshouser had the benefit of a 4-0 cushion when he walked to the mound for the bottom of the first. Carson used singles by Owen White and Brandon Mock, two errors, a wild pitch and Ben Shoaf’s towering sacrifice fly to score those four early runs. South center fielder Tyler Rary was able to chase down a prodigious belt by Shoaf that would’ve been out out most ballparks.
“There are always key plays that can change the path a game takes,” South coach Thad Chrismon said. “Those plays came early tonight, and we didn’t make any of them.”
South loaded the bases without a hit in the bottom of the first, but Holshouser got Peyton Penninger to hit a ground ball for the third out.
Then Carson (5-1, 4-1) made it 9-0 in the top of the second. That five-run second was fueled by a leadoff single by Cameron Prugh and back-to-back errors. Next came consecutive run-scoring hits by Grayson Whicker, Shoaf and Brycen Holshouser.
“After that, we had a big lead and I just needed to throw strikes,” Maddux Holshouser said.
South (4-3, 3-2) had runners at second and third with one out in the bottom of the second, but when Holshouser worked out of that jam without any damage, it was all over.
“Our theme this year is finishing,” South catcher Shaggy Wyatt said, shaking his head. “But right now we’ve got to figure out a way to get started better. We’ve got to do a lot of little things better.”
South starting pitcher Blake Johnson wasn’t sharp, and he didn’t get much defensive help. Eight of the nine runs the Cougars put up against Johnson were unearned.
“We had a good approach against Blake tonight,” Mock said. “We were staying back and we were using the whole field.”
Dillon Norton took the mound for South in the third and threw effectively.
After Maddux Holshouser zipped through the third and fourth innings, Carson got the runs it needed for the 10-run mercy rule in the fifth. Pearce Wilhelm walked to start the inning, and stinging hits by Morrison and White quickly filled the bases for Mock.
Morrison and White both have on-base percentages of .478.
“They’ve been on base all the time, and I love it,” said Mock, who is batting .476.
Mock’s solid, two-run single made it 11-0, and it was 12-0 after Brandon Newton lofted a sac fly.
Prugh pitched the fifth for Carson. South picked up a run on Bo Corriher’s booming triple and Walker Joyce’s sac fly, but it was way too little and way too late, as a huge crowd headed to the parking lot.
“Just a poor performance by us,” Chrismon said. “We made mistakes and we allowed them to snowball on us. We played about as badly as we can play. But it’s early. We’ve got time to work on things, and we’ll regroup.”
The lopsided win came on the heels of Carson’s emphatic 11-0 victory at West Rowan on Friday.
“We’re playing with a lot of chemistry, and we’ve been working hard on our hitting,” Shoaf explained.
Cauble didn’t disagree, but he expressed caution. The SPC season is an 18-game marathon, and it’s way too early to get excited about being tied for first with East Rowan and West Rowan.
“We came over here expecting a dogfight, we were focused and we got a good win,” Cauble said. “But it’s just one win. We’ve got to stay even keel.”