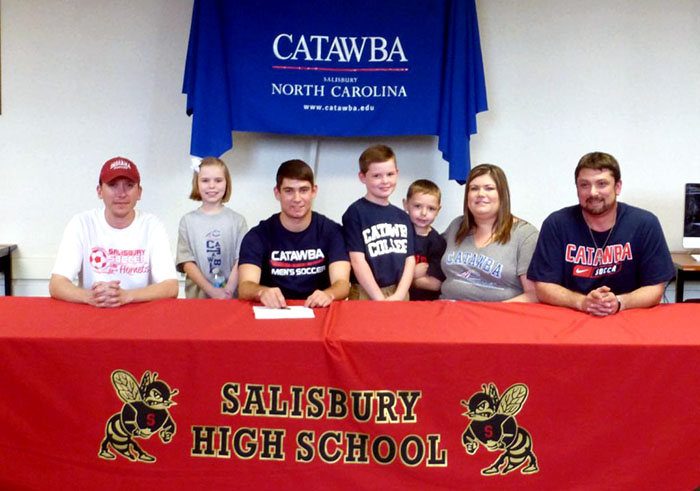 SALISBURY — Jeremy Lynch was a pole vaulter and wrestler in his playing days, athletic interests that he was eager to pass on to his son.
But Joshua Lynch discovered a different sports passion at age 4 — soccer. And gradually soccer took over, pushing football, baseball and everything else aside. By the time he was 8, Lynch was playing club soccer, and he was hooked.
When the Lynches moved from Ohio to Salisbury, they altered the course of local soccer history.
Coach Matt Parrish’s Hornets have gone 28-0 in the Central Carolina Conference the past three seasons, while winning 2A state titles in 2013 and 2015. Lynch, who signed with Catawba last week, was an important cog in that run.
Lynch wasn’t supposed to be a serious factor in the 2013 state-title game when he was a sophomore, but when an injury forced Parrish to make an instant decision regarding a replacement, his eyes settled on Lynch.
Lynch helped the Hornets win a 2-1 comeback struggle against previously unbeaten First Flight.
“It’s the state championship, so you don’t necessarily put in the fastest guy or even the most experienced guy,” Parrish said. “You put in the guy who you know is going to keep his head under pressure. For me, that was Lynch. He helped us win.”
Lynch remembers that mid-November day in Raleigh that proved to be his breakout effort.
“I was nervous as crap when Coach put me in,” Lynch said. “But as the game went on, I got more and more confident that I belonged. No one on our team was giving up, and I knew we had the skills to win that game.”
Lynch was All-CCC as a junior and All-CCC and All-Rowan County as a senior.
His senior season was epic. He was the facilitator who allowed Salisbury to switch from defense to offense in an instant, and he was precise on powerful throw-ins and corners.
“He was always looking for that next pass and he was always right place, right time,” Parrish said. “He did everything the right way.”
Lynch scored a modest three goals, but his 38 assists as a senior rank eighth on the North Carolina High School Athletic Association’s list for a single season.
It was no surprise that Lynch assisted on the first goal, 10 minutes into the match, in Salisbury’s 3-0 victory over Washington in the state-title game.
Salisbury senior Landon Goodman, who signed with Anderson, had a magical scoring season — 66 goals. Lynch was instrumental in Goodman’s onslaught on goalkeepers.
“I’ve been fortunate to play with Josh in club soccer as well as high school,” Goodman said. “He’s a great team guy and he’s a leader. I’m glad to see him signing with Catawba.”
Lynch had options, but playing for his hometown college made a lot of sense.
“I’ve spent time practicing against those guys and I like those guys and I like the program,” Lynch said. “Coach (Ken) Hassler asked me to come to their camp, and the recruiting kind of went on from there.”
Staying close to home gives Lynch a chance to play with former SHS teammate Bobby Cardelle. It also gives him an opportunity to instruct three siblings. The Lynches (Jeremy and Jennifer) recently adopted two boys (Levi and Chance) and a girl (Addison). They’re all in the 6-9 age range and they’ve been excited about learning the game.
“I went a long time without any brothers and sisters,” Lynch said. “It’s been great teaching them what I love to do. It’s fun being a big brother.”
The Lynches were a large part of Salisbury soccer this past season. Jennifer was working the concession stand and Jeremy was handling P.A. duties.
“Good service, Lynch!” was a call Jeremy made frequently after his son logged a key assist.
“Sure I heard him,” Joshua said with a laugh. “He doesn’t really need a mic.”
The signing party for Lynch was held in the Salisbury High media center. There was the usual pizza and soft drinks, and a lot of people showed up, including the Lynch’s pastor.
Jeremy Lynch thanked the Salisbury soccer players for making his son shine.
Parrish thanked Lynch for making every teammate shine.
“He never asked for anything individual and he never cared whether he played midfield or back, as long as he was a part of a winning team,” Parrish said. “He’s the most unassuming, the most team-first guy I’ve ever coached.”