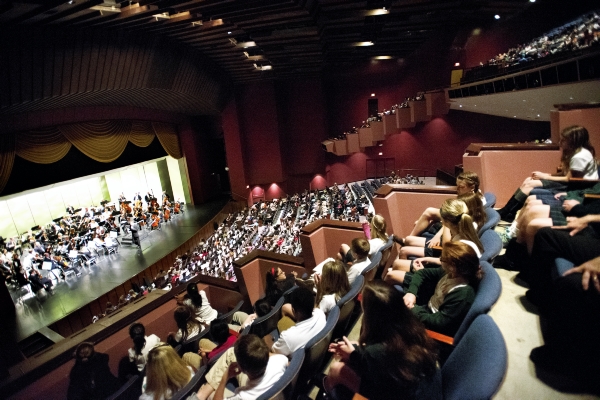 ALLISON LEE ISLEY/SALISBURY POST The North Carolina Symphony's small ensemble performs for local 5th grade students in the Keppel Auditorium at Catawba College in Salisbury, N.C. on Thursday, March 10, 2016. After the performance, the students played "America the Beautiful" on their recorders.

SALISBURY — David Glover, associate conductor for the North Carolina Symphony, sections off the audience at Keppel Auditorium. He instructs one section of fifth-graders to snap their fingers, another to rub their hands together and a third to pat their legs. As he points at one section after another, the hall fills with the sound of rain, wind and the slow build of thunder.

It’s a physical illustration of musical dynamics – the softness or loudness of sound – and one that the symphony itself demonstrates a moment later by playing the fourth movement of “The Storm” from Beethoven’s Sixth Symphony, “Pastoral.”

Each year, every Rowan County fifth-grader is invited to hear the North Carolina Symphony perform. Thursday’s concert was part of an annual tradition that stretches back to the 1970s, and is something that’s made possible by donations from the Robertson Family Foundation and the Margaret C. Woodson Foundation.

For many kids, it can be the push that tips them into a career in music.

The North Carolina Symphony gives 40 educational concerts a year, Director of Education Sarah Gilpin said. All of the symphony’s concerts fall in line with state music education requirements, and they try to pick pieces that illustrate basic musical concepts like rhythm, form and dynamics.

This year, Gilpin said, the symphony chose music that told a story, such as “The Sea and Sinbad’s Ship” from Nikolai Rimsky-Korsakov’s “Scheherezade,” or the infernal dance and finale from Igor Stravinsky’s “The Firebird” suite.

It’s a tactic that Jones thinks went over “beautifully.”

“I thought the idea of working the music around stories was perfect for the kids,” she said.

“You could really interact,” she said.

For the kids, one of the highlights of the concert is the chance to show off their own fancy fingers as they were invited to play “America the Beautiful.” Pleitez said her class practiced a lot for that moment, and she was buzzing with nerves as she walked into the auditorium. The symphony was full of people who were much better musicians than she and her peers, she said.

But after hearing the symphony fly through the music, she calmed down.

For Jones, it’s the looks on the kids’ faces.

“To us, that’s worth a million dollars,” she said.

She loves the way their eyes pop wide when they walk into the foyer or see the concert hall, and she loves the restless excitement as they listen to the symphony play The Symphony played two concerts in Salisbury Friday morning, giving more than 3,000 fifth graders what is likely their first taste of classical music.