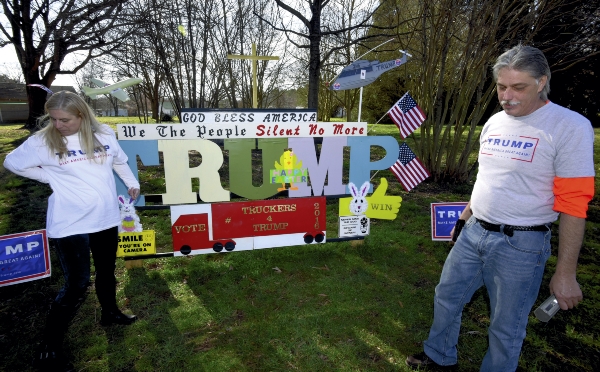 FRANKILN — It’s 5 feet tall, 12 feet wide and has enticed hundreds to pause and snap a picture.

“Honestly, I couldn’t tell you how many hundreds have pulled in the ditch or ran across my yard to take a picture,” he said.

The centerpiece of Fitzgerald’s sign is his favorite presidential candidate — businessman Donald Trump. It stands 5 feet tall, featuring small knick knacks and slogans supporting Trump. For each season there’s a new incarnation. During Christmas, Fitzgerald added a “Santa Trump” and “Trumpty the Snowman” to the sign. Now, the Trump sign is decorated for Easter.

“We like to have fun with it,” he said. “It’s been fun, and I think it’ll continue to be fun until November.”

Fitzgerald said he first started working on the Trump sign in October. Since then, he and his girlfriend Theresa Tiano have become the Trump campaign’s Rowan County organizers. They’ve passed out a number of Trump campaign signs across a five-county area.

Fitzgerald said he moved to Rowan County four years ago. He lived in Davidson County for a lengthy period. Now, he lives in the Franklin community and recruits truck drivers for several companies, which is reflected by a small “Truckers 4 Trump” addition to the sign. Tiano is originally from New York.

They haven’t always been Trump fans, but quickly became supporters after Trump announced his candidacy in June 2015. Listening to a few of Trump’s campaign rallies helped solidify their support, Fitzgerald and Tiano said. The fact that Trump speaks his mind is among the things the couple like about Trump.

Trump’s appearance as an outsider and parts of his platform, however, have led current and former Republican leaders to dish out sharp criticism of Trump. Last week, Mitt Romney, the Republican Party’s 2012 presidential nominee, joined the growing crowd of Trump critics.

Romney said America’s “prospects for a safe and prosperous future are greatly diminished” if Trump is elected president. The country would sink into a prolonged recession, Romney said.

The various criticisms only strengthen support for Trump, according to Tiano.

“What he did is elevate Trump with what he said,” she said.

Some in the Republican Party hope to prevent Trump from becoming president by limiting the number of states he wins during the presidential primary. If Trump doesn’t reach a certain threshold, the Republican Party’s nominee could be decided at the national convention. Called a contested convention, delegates previously required to vote for Trump because of election results could shift to other candidates.

Tiano said it seems like a vocal minority is trying to overrule the majority of voters.

Although the yard sign has brought a bounty of positive attention, it also attracted a vandal. In December, an unknown person knocked parts of the sign down. Fitzgerald said the unknown vandal couldn’t knock down the entire sign because its frame dips two feet below ground.

He filed a police report, but said the officer didn’t take him seriously.

“It was my property,” he said. “I paid for the sign. The point is that it’s not cool to do that. You have a right to your opinion, but not to destroy my property.”

Regardless of political opinions, Fitzgerald said it’s most important that Americans cast ballots in the 2016 elections.

“If you don’t stand up and do something, then don’t complain if you don’t like what’s going on,” he said.