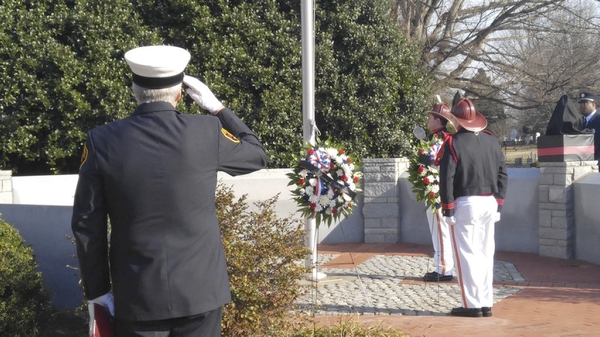 The 2016 memorial service to honor the late Justin Monroe and Vic Isler, who died in the Salisbury Millwork fire in 2008. File photo

An American flag was unfurled and hoisted onto a pole Monday morning at the Salisbury Firefighter’s Memorial as a cadre of area firefighters lined the perimeter to honor Victor Isler and Justin Monroe, two firefighters who lost their lives eight years ago battling a massive fire at Salisbury Millwork.

More than 100 firefighters responded to that five-alarm fire as it quickly spread from an office to a warehouse at the woodworking building located on South Martin Luther King Jr. Avenue.

Isler, 40, and 19-year-old Monroe were trapped inside after parts of the building collapsed around them. Their deaths continue to be counted as one of the most tragic events in local firefighting history.

Each year the firefighting community, area residents, family and friends return to the memorial site in the 1400 block of South Main Street to honor the two men.

“It started out as a normal day with a big fire. Things were going well, but as you know, things changed in an instant,” Fire Chief Bob Parnell said during the service.

Capt. Rick Barkley, who was also inside the building, was seriously injured that day and rescued by a rapid intervention team. Locke firefighters Bradley McKnight, James Hall and Chief Rusty Alexander were also injured while responding.

Over the years, Victor’s wife, Tracy, and their two children would attend as did Lisa and Eddie Monroe, Justin’s mother and father. Eddie died in 2012. In recent years attending the ceremony has become at times unbearable. The Monroe family did not attend.

To build a home: the long road to the…