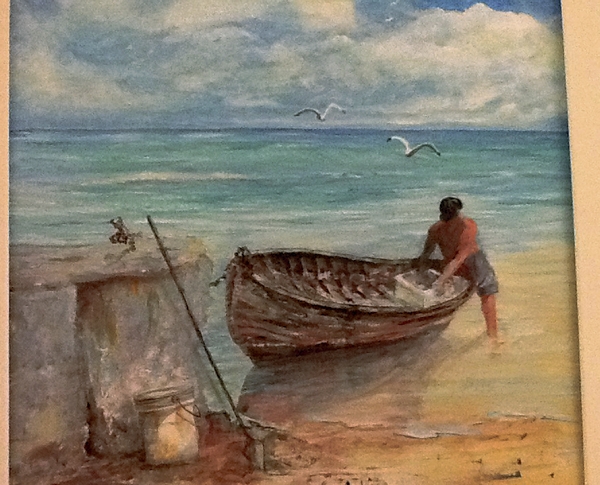 By Carolyn Kirkman. Part of the Carolina Artists exhibit at RPL.

The Carolina Artists on display

The Carolina Artists will have a display of artwork in the Rowan Public Library, Salisbury Branch, at 201 W. Fisher St. throughout the month of March. The art will be for sale and on display in glass cases and throughout the lobby.
Livingstone to host exhibit and present one-act play

The art of faculty members Mr. Karam Vir Batra, Mr. Stanley Bryant and Dr. Frederick Ford will be on exhibit Saturday, March 5 before, during and after the Julia B. Duncan Players’  one act play “Herbert III.”

The performaces, featuring Angela Jacobs and Michael Connor,  are at 3 and 6 p.m. at the Tubman Little Theatre on the Livingstone College Campus,  701 W. Monroe St. Admission is $5. For more information call 704-216-6260 or email mconnor@livingstone.edu

The Phoenix Readers’ next performances

“There are many wild stories in the southern United States, passed down from generation to generation for several hundred years. The Phoenix Readers presents a collection of five: Presentneed, Bymeby and Hereafter; The Longest Story; The Talking Mule; Don’t Drop in My Soup;  and The Tale of the Hairy Toe, featuring eccentrics, ghosts, monsters, giants and verbal animals. Each is entertaining and full of surprises.”

‘Where is Alexander the Great When You Need Him?’

6:30 p.m. Thursday, March 17: Dr. Phil Williams speaks on “The Gordian Knot tying America, NATO, Russia and Turkey in Syria. Where is Alexander the Great When You Need Him?” at the ESU’s March banquet at  at the Country Club of Salisbury. Dr. Williams holds two masters and a doctorate in international law and diplomacy. Dinner reservations $32; RSVP to Toni at 704-212-2114. All are welcome. Sponsored by The English Speaking Union Salisbury Branch. Find out more at www.esuus.org

4-9 p.m. Wednesdays, March 9 and 16: Call for Indie singers and bands from Salisbury, surrounding areas. Nine singers/bands will be chosen for the showcase event on March 26.

Artwork from award-winning artist Walter Stanford’s series NC Century Farms will be exhibited in Catawba College’s Corriher-Linn-Black Library from March 5 through April 2. The exhibition is one of several events that the college will host during March, or Farmin’ Month, on campus.

The March 17 campus visit by Pulitzer-Prize-winning author Jane Smiley for the 30th annual Brady Author’s Symposium became the impetus for examining the importance of farms and farming life during March. Much of Smiley’s writing focuses on the American farm and the lives of the families who gain, own, maintain, change, and lose the farming way of life. Because of this, Catawba chose to make Smiley’s mid-March visit to campus a centerpiece for the campus’ March celebration of Farmin’ Month. Stanford’s exhibit is a visual compliment to the farm theme that recurs in Smiley’s work.

Through a regional artist grant in 2009 by the Arts and Science Council of NC, Stanford, who lives in Kannapolis, painted a series of work depicting farm life on several North Carolina century farms.

“As the son of a retired agricultural extension director, I have come to develop a deep appreciation for farming and many of the wonderful people in it,” said Stanford. “Much of the values and character of our forefathers was developed on farms such as these, and I am grateful that I can use my skills as a painter to give the public a glimpse of their lives.”

The N.C. Department of Agriculture and Consumer Services started the Century Farm Program in 1970 to recognize North Carolina’s agricultural heritage and those families who built the foundation of this farming state.

A 1986 graduate of East Carolina University, Stanford is a Fine Artist with an extensive background in editorial and commercial illustration and graphic design. He worked for 15 years as a freelance illustrator specializing in pastel. He continues to work from his studio in Concord. He is a member of the Southeastern Pastel Society and the Piedmont Pastel Society of Charlotte, and is president of the artists’ coalition of Clearwater Artists Studio.  To learn more, visit www.walterstanford.com

Stanford’s exhibition is free and open to the public during regular library hours.

The public is invited to meet the artist at a coffee and doughnuts reception from 10 a.m.-noon on Saturday, March 19 in the Corriher-Linn-Black library at Catawba. During this reception, Stanford will give a demonstration of his creative process.