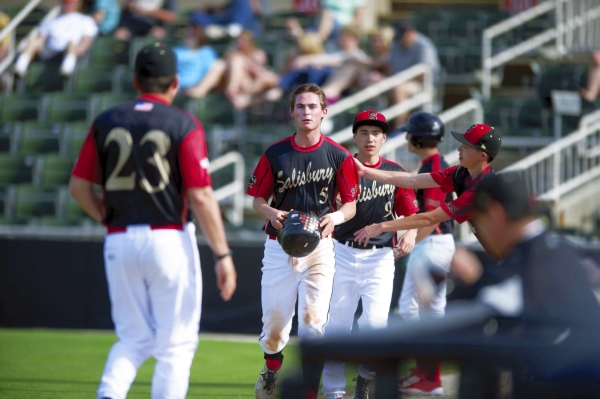 SALISBURY — Central Carolina Conference Pitcher of the Year Riley Myers is not easily replaced, but new coach Mike Herndon should lead a competitive team in his first year at Salisbury.
Herndon has an outstanding track record of 312 prep wins, mostly at 4A Davie County.
He’ll have adjustments to make at a 2A school with a smaller talent pool than Davie, but at the same time, the opposition isn’t going to be as strong as what the War Eagles were facing in the Central Piedmont Conference.
“It’s going to be fun,” Herndon said. “We’ve got a good mix of veterans and talented young kids.”
Also missing from the 2015 team that went 17-9 under coach Scott Maddox, are Ryan Jones and J.T. Austin, standouts who joined Myers on the All-Central Carolina Conference team.
Herndon has two returning All-CCC players in Will Steinman and Alex Yang. The versatile Steinman had a banner junior season filled with accolades and also made the All-Rowan County squad.
Pitching is at least 75 percent of the equation, and that’s the area where there is the least certainty for Herndon and the Hornets entering the season.
Right-hander Harrison Smith (5-3) is back to lead the staff, but the other key hurlers probably will be youngsters. Herndon has high hopes for freshman lefty Jack Fisher, sophomore Griffin Myers (Riley’s younger brother), junior Jake Murphy and 6-foot-7 freshman Hut Smith.
If Hut’s name sounds familiar, it should. You can find baseball cards of his father, who has the same name. The original Hut threw bullets for A.L. Brown High and was a fourth-round draft pick by the Baltimore Orioles in 1992. He made it as high as Double-A ball and pitched professionally in minor leagues and independent leagues until 2003.
“Hut’s a big ol’ kid,” Herndon said of the towering freshman. “The key is for him to be able to repeat his delivery. That’s what we’re working on.”
Steinman can pitch if needed, although the Hornets’ defense benefits if he stays in centerfield. He’s 6-2 with a long stride and covers a lot of ground.
Lefty Chandler Lippard also can pitch in a pinch, but the plan is for him to take care of first base, where’s he’s an excellent defender.
Starters returning from a year ago include Steinman (.400, 27 runs, 26 steals), Alex Yang (.338, 21 runs), Lippard (.265, 16 RBIs), Harrison Smith (.274, 16 RBIs) and John Yang (.242, 18 RBIs).
Senior Alex Link also has played quite a bit.
Newcomers to watch in addition to Fisher, Myers and Hut Smith are sophomore infielder Joe Steinman, Will’s younger brother, and freshman catcher Bo Rusher.
“Will Steinman caught last year, and he’s a good catcher,” Herndon said. “But Will is the best centerfielder we’ve got, and we want him out there. We believe Rusher can take care of the catching.”
The outfield figures to be John Yang, Will Steinman and Link most of the time.
Harrison Smith probably will be the third baseman when he doesn’t pitch. Murphy could step in at third when Smith pitches.
Herndon has good options in the middle infield with Alex Yang, Myers and Joe Steinman.
“I believe we’ve got pitchers who will throw strikes and we can be solid defensively,” Herndon said. “We’ll be playing some young kids, but they can’t play scared. If they play when the lights come on the same way they’ve practiced, we’ll be OK.”
•••
NOTES: Salisbury lost to the Greater Cabarrus Stallions on Monday. The next game for the Hornets will be at home tonight against Lincoln Charter.