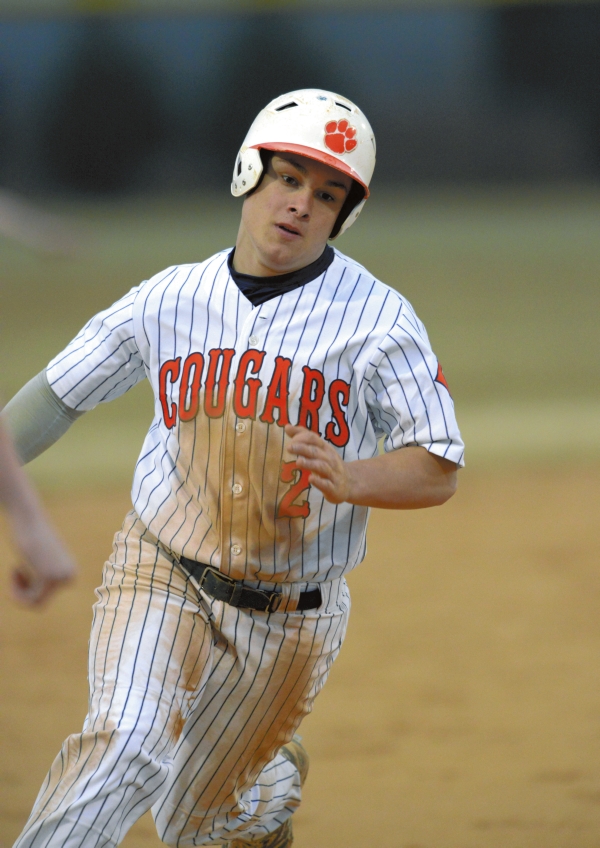 CHINA GROVE — Carson’s baseball team struggled to make contact on Tuesday, but one swing of Michael Morrison’s bat cured a lot of ills.
Morrison’s walk-off homer leading off the seventh inning gave the Cougars a dramatic, 4-3, win against Central Cabarrus and got the Cougars off to a great start in what will be a marathon, 18-game South Piedmont Conference season.
“That sidearmer (Bryson Biddy) ran it low and in on me, but I put a good swing on it,” Morrison said. “One of our coaches had just yelled at me not to try to do too much. I just wanted to get on base, but, hey, it felt great.”
Morrison had been sidelined for an extended period with a groin injury. Carson coach Chris Cauble said his leadoff man, offensive catalyst and all-county center fielder hadn’t been able to practice for weeks prior to finally taking the field on Saturday.
“We love him and it’s great to have him back,” Cauble said. “We had some bad at-bats tonight, but that last one made up for all of them.”
Carson hitters had their hands full with Central starter Cameron Kepley. He struck out seven and had only allowed one hit — a first-inning solo shot to left by Owen White — when Biddy was summoned from the bullpen in the fifth.
Biddy struck out three more Cougars to bring the Carson “K” total to 10.
“We’ve got to limit the strikeouts,” Morrison said. “But our pitching and defense were pretty great.”
Three Carson hurlers got the job done on the mound. Lefty Maddux Holshouser was sharp in the first two innings. Holshouser gave up a run-scoring double to Kepley in the third that tied the game 1-all.
Central took a 3-1 lead in the fourth on Lane Campbell’s RBI single and Jake Rowen’s bases-loaded walk.
That walk ended Holshouser’s night. Next Cauble turned to Caleb Hall, and Hall’s middle relief effort gave Morrison a chance to be a hero. First, Hall got out of that mess in the fourth. Then he allowed just one hit in the fifth and sixth, put two big zeroes on the board and gave the Cougars a chance to rally.
“I knew had a job to do, and I was just trying to keep us in the game,” Hall said. “I hit my spots, made them put it in play and trusted my defense.”
Carson got one run back in the bottom of the fourth frame on Ben Shoaf’s sacrifice fly.
Carson got even at 3-3 in the fifth inning. Cameron Prugh walked and hustled first to third on Morrison’s sac bunt. Central had the infield in when White rapped the ball directly at the shortstop, but the throw home sailed to the backstop, as Prugh scored the equalizer.
White relieved Hall for the seventh and threw an exciting inning as radar-gun bearing scouts sprang to life all over the ballpark. White fanned the side around a hit batsman and an intentional walk. White got the third out with runners at second and third.
Carson fans were still cheering White’s effort when Morrison suddenly hit one out of sight to send a chilly crowd to the parking lot.
Out-hit 7-3, the Cougars still won.
“That starting pitcher for Central (Kepley) was a bulldog, but the biggest thing was we found a way to win,” Cauble said. “Our pitching and defense were awesome. We’ll work on the hitting.”
•••
NOTES: Carson hosts North Rowan today in an endowment game that is set to start at 4:30 p.m. … Grayson Whicker singled to lead off the sixth. That was the only hit Carson had besides the two homers.
R H E
Central Cabarrus 000 120 0 — 3 7 2
Carson 100 110 1 — 4 3 1