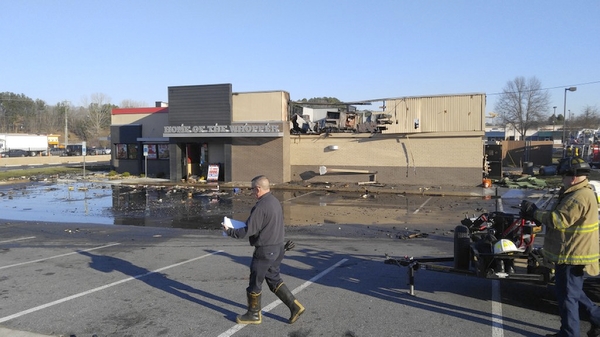 Firefighters and investigators were on the scene at the Burger King on Jake Alexander Boulevard, heavily damaged by fire this morning. Shavonne Potts/Salisbury Post

Multiple fire departments responded to the restaurant, located at the corner of Jake Alexander Boulevard and Lincolnton Road. Fire personnel were dispatched to the fire sometime around 4:30 a.m. and had the fire under control around 6:30 a.m.

Fire investigators remained at the scene well into mid-morning waiting to go inside the building. The roof of the building collapsed.

Battalion Chief Chris Kepley on Monday morning said firefighters were waiting for an excavator to dig through some of the debris so that fire investigators could make their way into the building.

On Monday afternoon, Battalion Chief Tim Hurlocker said the fire started near the top of the building, around the restaurant’s office and storage area.

Kepley confirmed no one was at the business when the fire began. The restaurant is open until 12 a.m. It was unclear who called the fire in, but early reports indicate a passerby called 911.

Duke Energy was called in to disconnect power to the building, which also shut down power to nearby Jeter’s Deli and other businesses. In addition to Salisbury City Fire Department, the following departments responded and provided coverage at other fire stations: Locke, Granite Quarry, Union, South Salisbury, Cleveland, Spencer, and Faith Fire departments. Rowan County Rescue Squad also responded.

No cause has been determined yet. Investigators are still on the scene.

The State Bureau of Investigation has been called to help determine the cause of the fire.