A tale of two schools: the consolidation discussion 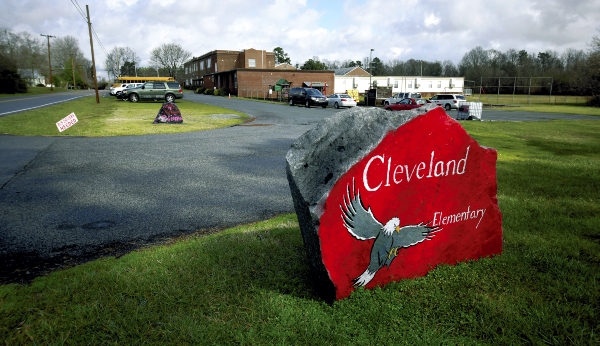 WOODLEAF — The basement of Woodleaf Elementary is full of records. Former principal Sue Herrington said that schools are required to keep student records for at least 75 years. At Woodleaf, those records lay out the community’s history. Many are written in old style, refillable ink or have black and white photos.

“You could go in there and trace family history in those records to great-grandchildren,” she said.

The records are a physical representation of the deep ties the school has to the community, ties that are about to be broken.

Woodleaf is moving towards consolidation with Cleveland Elementary. As the consolidation moves forward, Herrington said she hopes that Woodleaf’s records, and the ones undoubtedly housed at Cleveland, can be preserved or displayed for these two communities that take such pride in their history.

Eight years after the topic of consolidating the Woodleaf and Cleveland elementary schools began, the project is finally moving forward. Construction of a new, western elementary school is tentatively scheduled to begin in September of this year.

The close of one long discussion that was fraught with controversy has opened the door to others, with the Rowan-Salisbury Board of Education now considering the closure or consolidation of other system schools.

During the board’s Jan. 11 meeting, board member Travis Allen claimed that the system had “about 10 schools too many.” School officials have cited aging infrastructure, high maintenance costs and declining enrollment as reason for the move towards consolidation.

Countywide consolidation is a discussion that began with the current Board of Education. Superintendent Dr. Lynn Moody said that she began thinking about the issue when she sat down to write her first budget for the system in 2014.

“No wonder we don’t have enough funding to keep our facilities adequate,” she said. She realized, “we have too many schools.”

Rowan-Salisbury has 35 schools, which is comparable to neighboring districts of similar size: Davidson and Iredell-Statesville. But not all RSS schools are up for the cut — yet, at least.

“Their conversation I think is beginning with elementary,” Moody said. “They really haven’t talked about closing middle school or high school yet. That might be a later conversation.” Moody said.

Out of Rowan-Salisbury’s 20 elementary schools, 11 were built prior to 1950, and Moody and Allen say the system’s budget can no longer keep up with high maintenance and energy costs.

Allen said that since he joined the board in 2014, the system has spent millions on paving and roofing repairs that he feels could have been avoided in more modern facilities.

Herrington said that during her principalship at Woodleaf, the school had a single working well, and had outdated sewer and septic systems that were in constant need of repair.

School officials estimate that the system could save half a million dollars in recurring, annual costs for each school closed. It’s money that could be used to provide extra supplements to teachers, boost salaries or improve maintenance budgets.

Currently, it costs the school system an average of $1.06 per square foot to heat, cool and light its elementary schools, according to a recent energy assessment. In a long-range facilities plan and capacity and energy efficiency study the board requested from sfL+a Architecture, Architect Ted Hughes determined that the system shouldn’t be paying more than 50 or 60 cents per square foot. Current energy costs among Rowan-Salisbury elementary schools range from 80 cents to $1.54, with some schools using expensive propane or oil heat systems.

The system also has 1,802 open elementary school seats, according to the most recently available numbers.

“What we do know is that we have a lot of empty seats. We do know that. And we are paying for those empty seats and they do come at a cost,” Moody said.

Filling under-capacity schools wouldn’t just involve consolidation, Moody said, but also redistricting and adjustment of attendance areas. But the thought of utilities savings and the promise of newer, more versatile facilities is alluring, and the system has enough old buildings that Allen sees further closures and consolidation as inevitable.

“We have to have a plan because our infrastructure is crumbling. We have to,” he said. “I don’t think consolidation is a want, not a need. We don’t want to, we have to.”

Allen himself is from the western edge of Rowan County, and understands the pride that communities take in their schools – they serve as rallying points and help form the identity of the community. When it comes to community schools, emotions run high.

“You can never underestimate the power of emotions when they’re tied to schools,” Moody said.

But small, community schools are no longer practical, Allen said, and he knows it will be a hard pill for communities to swallow.

“It’s discouraging to some in the community because I’d say we’re based in a 1950s philosophy of education, where every little community has a school,” he said.

The district needs to “get with the times,” he said.

This year, the board plans to look the condition, enrollment numbers, operation and transportation costs, proximity to other district schools and ease of access for all RSS facilities. The long-range facilities plan lists the two, soon-to-be-combined schools as having the worst conditions of the system’s elementary schools.

Safety is also a concern. Older school buildings weren’t built with security in mind, Herrington said. It just wasn’t an issue. But with a current push towards maximizing student safety and security, many old school buildings don’t make the cut.

Woodleaf Elementary has three main streets that run through the campus, and a separate gym located about a tenth of a mile from the main building, and it’s a major concern for faculty, staff and parents, Herrington said.

Despite long back-and-forths at board meetings, Allen said, it’s important to note that the board hasn’t made any plans on how to proceed with the discussion, as of yet. Currently, it’s focused on gathering information.

And just because the board is pushing for consolidation doesn’t mean that they’ll go through with it.

The consolidation of Cleveland and Woodleaf was first put on the table in 2008, and was quickly dismissed due to community outcry.

“We’re kind of protective of them,” Cleveland Town Commissioner Gerald Osborne said of the schools.

Osborne said that the people of the town view the school as part of their history and identity, and didn’t see a reason to combine the two schools, so they shot it down.

And since the board’s first step, after the long-range facilities plan, is to hold community information meetings, the same thing could happen with this discussion.

“They could have these town hall meetings and say, ‘You know what, our community really feels like it’s more important to have smaller neighborhood schools than it is to invest that into professional development and nicer facilities where our kids go to school at,’” Moody said.

The board plans to hold community meetings in each region of Rowan, beginning with an April 26 meeting at West Rowan High. Allen encouraged people to come and express their opinions – without community input, he said, the board only has one perspective.

“Money’s not the most important thing. I mean it matters when you’re running a school board and a school system, but it’s not always the right thing,” he said.

But there’s more at stake than just community pride. Jobs are also a concern. That half a million in recurring costs savings per school includes administrative costs. The long-range facilities plan highlights areas of savings which include staff reductions of cafeteria workers, janitors, media center coordinators, principals and assistant principals.

But Moody believes that teachers’ jobs should not be at risk.

“I just cannot anticipate that any teacher would lose their job if we close schools,” she said.

The system hires teachers based on the number of students, not the number of classrooms – so those positions would still be needed. And Moody said that, done carefully and thoughtfully, administrative layoffs wouldn’t necessarily need to occur, either.

“You would have some administrative savings cost. But we have enough attrition in our district, that if you plan this, and there’s a thoughtful process to planning, that natural attrition of jobs would probably take care of that without there being any layoff in administration either,” she said.

But it depends on the board, she said, and how they choose to move forward.

The board will be holding a planning retreat April 7 to discuss its process in approaching the topic of further consolidations. If it chooses to prioritize savings on recurring expenses, job losses may occur.

There’s also a question of funding. If the board decides to move toward consolidation into newer facilities instead of redrawing attendance boundaries, they will have to come up with the money for it. Allen said he hopes that if the board “does their part” and comes up with a thoughtful process, they may receive aid or a bond referendum from the county commissioners.

And there’s a lot that’s still up in the air.

“It is very much open for conversation,” Moody said. “There has absolutely not been a single decision made. They’re just looking at the facts and the data and the cost savings, and if those things permeate with the community in some way, I think they will later take action, but it’s a ways down the road.”

Allen said that the push to close schools across the county is a “10-year at least” plan, and the board will hold extensive community discussions. Over the next year, the board will get input from the community, look at school conditions and criteria, and begin running scenarios.

“We just want to be sure that people are equipped with all the knowledge they could possibly have on the subject,” Moody said.