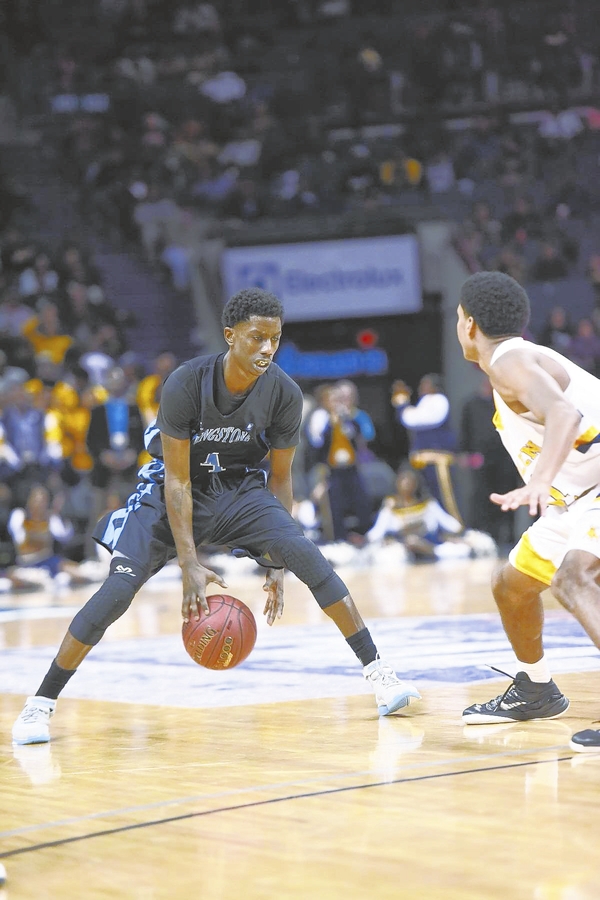 Livingstone forward Nasir Austin scored six straight points at the beginning of the last overtime period but the Bulls battled back to tie the game at 91-91 with 1:11 left.

With ice-water in his veins, guard Daryl Traynham buried a long 3-pointer from Stephen Curry-range to put the Blue Bears ahead for good with a minute left. Traynham and Ramel Belfield made free throws in the final 20 seconds for the final score.

“I am most proud of our young men because they persevered even when my belief was waning,” said Livingstone coach James Stinson. “In that first overtime, I thought, ‘oh man, this was not meant to be.’ But they stuck to the system, kept executing and pulled out the victory. We feel blessed.”

At the end of the first overtime, Livingstone guard Eric Dubose calmly sank two free throws with nine seconds left for an 85-83 lead. However, the defense allowed Dre Huntley to get behind it and his layup was goal-tended by Belfield at the buzzer. It was very close to being a clean block for Belfield.

Austin banked in a shot at the buzzer at the end of regulation, which would have given Livingstone a 72-20 victory, but it was waved off after the officials looked at numerous video replays.

It appeared to be the correct call but prior to the shot by Austin, guard Ty Newman received contact going up for close-range shot. There was no whistle and the ball was deflected to Austin.

So the Blue Bears had to regroup after two big disappointments but they did, outscoring the Bulls, 12-6, in the second overtime.

“I’ve been in overtime games before but nothing to this magnitude,” said Austin, who came up big with 19 points and 15 rebounds. “To have a game-winning shot reversed and then turn around have a blocked shot that counted, then to pull it out at the end, it was something.

“We just kept fighting,” continued Austin, “that’s all you can do. It’s not over until the clock goes off.”

The Bulls led at halftime, 36-29, as Livingstone shot themselves into a deficit. The Blue Bears’ outside shooting, which had been so good on Wednesday night against Lincoln, was off the mark in the first half last night.

Livingstone made just five of  18 three-point attempts, and in total, shot only 26 percent (9-of-35) from the floor in the first 20 minutes against J.C. Smith. Dubose, one of the Blue Bears’ leading scorers against Lincoln with 17, was 0-for-8 in the first half.

Livingstone had a spurt at the beginning of the second half, outscoring the Bulls, 8-0, in the first two minutes, taking a 37-36 lead.

However, J.C. Smith immediately went on its own 8-0 run to regain the lead and momentum, in just one minute.

Newman led a Livingstone comeback, late in the second half, after the Blue Bears had fallen behind by 11 points at 58-47.

Behind Newman’s driving layups and Dubose and Trynham catching fire with their shooting, Livingstone went on a 19-4 run, to move ahead.

JCSU’s Alandre Davis finally stopped the run with 2:05 remainng, making it 66-64 with a layup. At the 1:50 mark, the Blue Bears’ Jimmy Wilson calmly sank two foul shots to push the lead back to four again.

A follow dunk by Pratt again cut the deficit to 68-66 with a little more than a minute left. After an empty Livingstone possession, the Bulls’ Michael Bowman (from North Rowan) made two foul shots with 46 seconds left, tying the score at 68-all.

Dubose made jumper in the lane with 27 seconds left as Livingstone went back up, 70-68. However, Davis made a drive without any opposition for tying layup with eights seconds left. Newman immediately brought the ball up court, losing it with the ensuing contact, but the ball went right to Austin. He came within a fingernail of getting the shot off in time to win in regulation.

Newman scored 21 points before fouling out in the first overtime period. His teammates made sure that he gets to suit up again tonight.

Dubose, with a great second half, also ended up with 21 points. Austin had 19 points, including making nine of 12 free throws. Traynham followed with 16.

Diondre Pratt led the Bulls with 22 points followed by Alandre Davis with 20 and Robert Davis with 19. Bowman ended up with four points and Malik Ford, another North Rowan product, made one of two foul shots in overtime.

Austin led the Blue Bears with 15 rebounds and Newman added 13 boards. Pratt led all rebounders with 17.