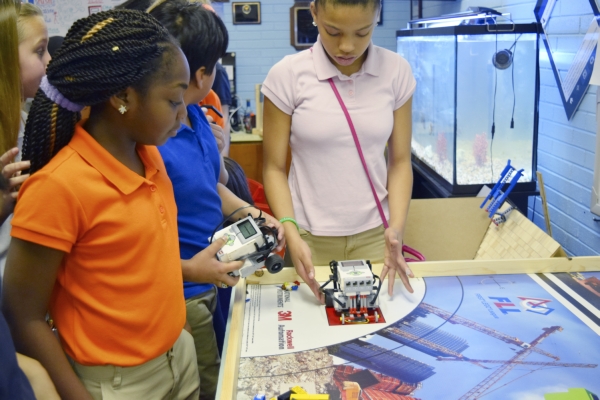 Michelle Cartwright places her team's robot on the starting square for a test run while teammates Adamma Anukwuem and Andy Ortez look on. Rebecca Rider

In Anthony Johnson’s class at Isenberg, students gather around a long table lined with obstacle courses. Michelle Cartwright sets a robot, made of Lego blocks, on the table and starts it up. It moves across a printed blue seascape, maneuvers past a plastic octopus and turns, headed for a tower of blue and yellow blocks. It misses.

“Someone messed with the code again,” she yells, looking over at a table where her classmates type on laptops.

The 16 students in Johnson’s class built the robot themselves, using a “Lego League” robotics kit. The obstacles on the table, from the push-timed “composter” to a mini, functioning dumpster were all constructed by the class.

The Lego League is a robotics tournament sponsored by Cyberkids Robotics, a non-profit based in Lenoir that promotes STEM education and robotics opportunities to kids in North Carolina and neighboring states.

The organization works as a third-party, providing equipment and funding for schools. Marketing Director Logan Burchette said a lot of schools don’t have the resources to keep up with the new models and sets Lego puts out every year.

“A lot of schools, they love the idea of it,” he said, “but they can’t afford to spend $600 every year on robot equipment.”

Having a third party facilitate a robotics program like the Lego League also ensures that the program is consistently available and doesn’t collapse when a specific teacher or administrator leaves.

“That’s mainly why this program exists,” Burchette said, “ so everyone in Rowan gets a chance.”

After Burchette spoke about Cyberkids Robotics at the Rowan Rotary, the organization received a donation that fully funded six Lego League teams in Rowan County schools. All he had to do was find them.

“She just called me and said, ‘I got something for you,” he said.

Johnson, a fifth-grade science teacher, specializes in STEM and robotics and believes in hands-on teaching. The Lego League is just one of the robotics projects his students have participated in, and it fits in well with his STEM and collaboration goals. And his students love it.

“They have stepped up to the challenge,” Johnson said, “all I had to do was mention competition. They’re working very hard.”

Burchette started working with the students in October. He visits the classroom about once a month for an hour and a half of training and troubleshooting, but Johnson said the kids work on it a little each day.

Lego puts out a different kit, with a different theme and challenge every year. This year’s theme is recycling. The robots have to take out the trash, collect compost and move animals.

It requires a lot of precision with angles and rotations. The button to dump the composter requires a perfect hit to start the clockwork-like process.

And even though the robots are made of plastic blocks, with pull-apart parts that the kids examine and exchange, the programing and function is exactly the same as professional grade machines.

“Basically if you made that robot bigger it’d be the Mars rover,” Burchette said.

Student Hannah Schmeltzer said there’s a lot of troubleshooting involved to get the robot perfectly on task.

“We have to change the programing just about every time,” she said.

Student Julian Beltran estimates that the programming is only 40 or 50 percent complete. And it took a lot of time to get the base program and the robot design right.

Beltran said he loved the programming side of the challenge, and that he was fascinated to see how ideas put into code were translated into action with the robot.

And while there’s still a lot of work to do, Johnson’s class has until April 25. In the meantime, the students plan to have fun. Schmeltzer said the robot design and concept is so easy that she’s tried building one at home.

Her attempts have been unsuccessful. So far, at least.

Cartwright said she loves the creativity of it.

“It’s fun to make your own, and you look like you’ve done it yourself,” she said. “Usually technology like this looks pretty complicated, so when you can do it yourself you feel like you’ve accomplished something.”

The two Isenberg teams will compete against 11 other teams from Rowan County on April 25 at China Grove Middle School.