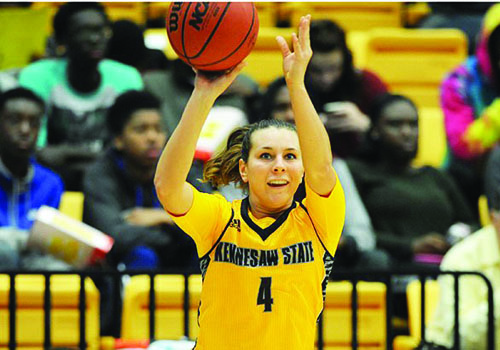 Kennesaw State Sports Information photo Kennesaw State’s Kelly Dulkoski (4) lets a shot go during a recent game at home in Kennesaw, Ga. Dulkoski set the career record for points at Carson High School with 1,458 and is playing well now for the NCAA Division I Owls.

November 16, 2015, is the date that’s still circled on Kelly Dulkoski’s calendar.
It was a turning point in the Kennesaw State guard’s college basketball career.
“That was the breakthrough game for me,” Dulkoski said in a phone interview.
The season was young on Nov. 16, and a modest crowd of 349 gathered to watch the Owls take on Presbyterian at Kennesaw’s Convocation Center, 20 miles north of Atlanta.
When Dulkoski, a 2013 Carson graduate, came off the bench for the Owls midway through the first quarter, she was a 5-foot-8 shooting guard still uncertain if she could thrive in NCAA Division I basketball and still uncertain if she’d ever come back all the way from a torn ACL.
Most of Dulkoski’s shots are 3-point attempts, and she missed three of her first four bombs against Presbyterian. There was no hint that it would become an extraordinary night.
She was still only 2-for-6 from long range late in the second quarter, but then she got hot from the wings, and it was like old times. She made a 3-pointer to close the half. Then she buried two more long ones only a minute apart to finish the third quarter. Both of those third-quarter 3s were huge, lead-changers in a tight game.
Dulkoski’s sixth and final 3-pointer of the night — and her fourth swish in a row — came early in the fourth quarter. Kennesaw State won that game, 49-47, and the intense Dulkoski allowed herself a deep breath and a big smile as family members hugged her.
“I played a significant amount of minutes in that game and I shot the ball well and helped us win,” Dulkoski said. “It was a great feeling. That game kind of put me back on track.”
Dulkoski set the bar high for herself at Carson.
Playing for coach Brooke Misenheimer, Dulkoski broke school records for career points (1,458) and points in a season (617 as a senior). Driving as well as shooting with deep range, she averaged a school-record 21.3 points per game as a senior and topped 30 points three times. She made the 3A All-State team twice and was voted 2012 North Piedmont Conference Basketball Player of the Year.
Dulkoski also stood out in tennis and track and was the Salisbury Post’s Rowan County Female Athlete of the Year as a junior.
She headed to Kennesaw State eager to compete for a job as a freshman in the fall of 2013. Within hours after she was informed that she’d earned a starting assignment, her elation turned to frustration. That’s when she went down with the ACL injury.
“An ACL tear is a process,” Dulkoski said. “It was definitely a long road to get back to 100 percent. Eight months after surgery, I was released to play basketball, but I knew I wasn’t 100 percent yet. About a year removed from surgery, I was getting close to being fine physically, but then I had to get over the mental part as well. And the mental part, that definitely was the toughest.”
Dulkoski’s comeback actually began last season as a redshirt freshman when she played in 23 games and averaged 4.5 points per game. She made 32 3-pointers, shooting a solid 37.6 percent from long range. In a late-season game against Lipscomb, she made five 3-pointers and scored 19 points.
“I started to have a little success late last season,” Dulkoski said. “Then I worked really hard over the summer to get into good shape for this season. I’ve been getting into the flow of games with my teammates a lot better this year, and more shots have been falling. It’s been gratifying to see the work I put in paying off.”
Dulkoski moved into the starting lineup on Dec. 5 and has stayed there.
Most of her impresive stats show up in the 3-point column. Seventy of her 100 made field goals have been 3-pointers. She ranks second in the Atlantic Sun Conference in 3-point accuracy (38.7 percent) and she’s third in total 3-pointers.
Besides making six 3-pointers against Presbyterian, Dulkoski made six 3s and scored 20 points against Mercer. She also scored 20 points against Morehead State. She’s scored in double figures 16 times and is averaging 10.0 points per game.
Dulkoski now averages 31 minutes per game and actually played 49 minutes in a double-overtime win against New Jersey Institute of Technology.
The next step in her evolution as a D-I basketball player is to shake the “shooter” label, and she’s working on it. Her steals, assists and rebounds are steadily going up.
In Monday’s 77-62 loss to Stetson in Deland, Fla., Dulkoski made four 3-pointers and contributed 16 points, four rebounds and an assist.
Kennesaw State (10-18) finishes the regular season on Saturday in Nashville, Tenn., against Lipscomb.
After that, the Owls expect to return to Stetson for a first-round game in the A-Sun Tournament.
A finance major, Dulkoski is on track to graduate in the spring of 2017, but she’s enjoying basketball so much that she plans to play two more seasons. While she’s a junior in the classroom, she’s still only a sophomore in terms of hoops eligibility.
“Everything is going well with school and basketball,” Dulkoski said. “It was a long time in coming, but it’s great to be all the way back.”