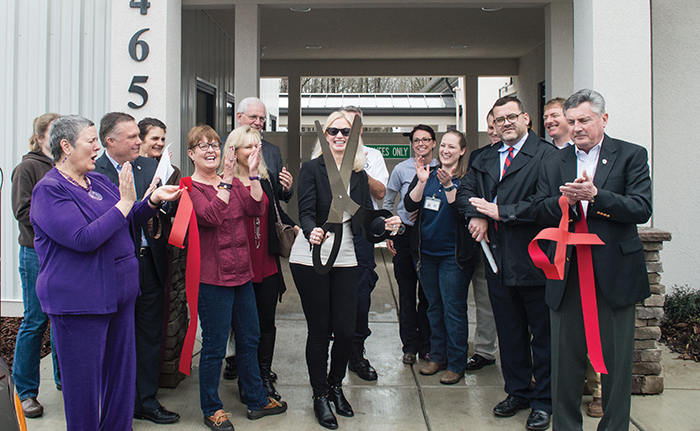 Josh Bergeron / Salisbury Post - Philanthropist Christine Morykwas cuts the ribbon on a new cat wing at the Rowan County Animal Shelter. Morykwas paid construction of the shelter and donated it to the county.

Animal advocates, elected leaders and community members gathered at the Rowan County Animal Shelter Wednesday for the ribbon cutting of a new cat wing. Philanthropist Christine Morykwas donated the cat wing to the shelter. Initially its cost was projected to be $500,000. By the time construction wrapped up, the price tag for Morykwas had risen to $1.1 million.

Morykwas said the cat wing will provide more than 160 individual cages for cats. Without the numerous, individual cages, shelter staff often placed groups of cats in dog runs. She said Rowan County needs to lead by example in animal control.

“The addition is going to put the shelter at the top as far as cats go,” Morykwas said about the cat wing. “Everything that’s been done has been done to ensure quality care … It’s an important function of a community to care for it’s animals.”

The cat wing also contains ventilation systems isolated to specific rooms and anti-microbial floors. Sick cats can be isolated to a specific area of the cat wing to prevent illness.

In return for building the shelter, Morykwas required Rowan County to adopt specific medical treatment and sanitation protocols. She first met with county officials in summer 2014. The county accepted her offer one month later.

“Our previous county commissioners started this vision of changing the way Rowan County Animal Control looks, works and feels,” commissioners Chairman Greg Edds said during the ribbon cutting. “Mainly I want to give kudos to Commissioner (Craig) Pierce for having a real vision. He’s really shepherded this and deserves a lot of credit. Then, I also want to thank the heart and the checkbook of Christine and what she has done for this county.”

County Manager Aaron Church said the addition has added an estimated $300,000 to the animal shelter budget, which this year topped $1 million for the first time ever. Among the added costs are four full-time staff members and four part-time staff members who are specifically responsible for cleaning the cat wing.

Church said the county is still sorting out final details of a volunteer program and spay and neuter program. In 2015, the shelter increased its adoption fee slightly for vaccinations and microchips in adopted animals. The shelter has already purchased new software that, among other things, allows staff to instantly post pictures of adoptable animals to Facebook.

The cat wing will not allow Rowan County to increase the amount of time animals are held in the shelter before being euthanized, according to Church and shelter director Clai Martin.

“It’s given us the opportunity to really show what we can be here in this county, not only with animal control but also with other opportunities,” Pierce said. “But, it couldn’t have been done without Christine and her generous donation of this facility.”

After his comments, Pierce presented Morykwas with a plaque. He also led a ceremony dedicating a room of the cat wing to local animal advocate Barbara Hart, who was instrumental in bringing Morykwas to Rowan County. When Hart saw a plaque at the front of the room, she let out a gasp and held back tears.

“It’s for the cats,” Hart exclaimed.