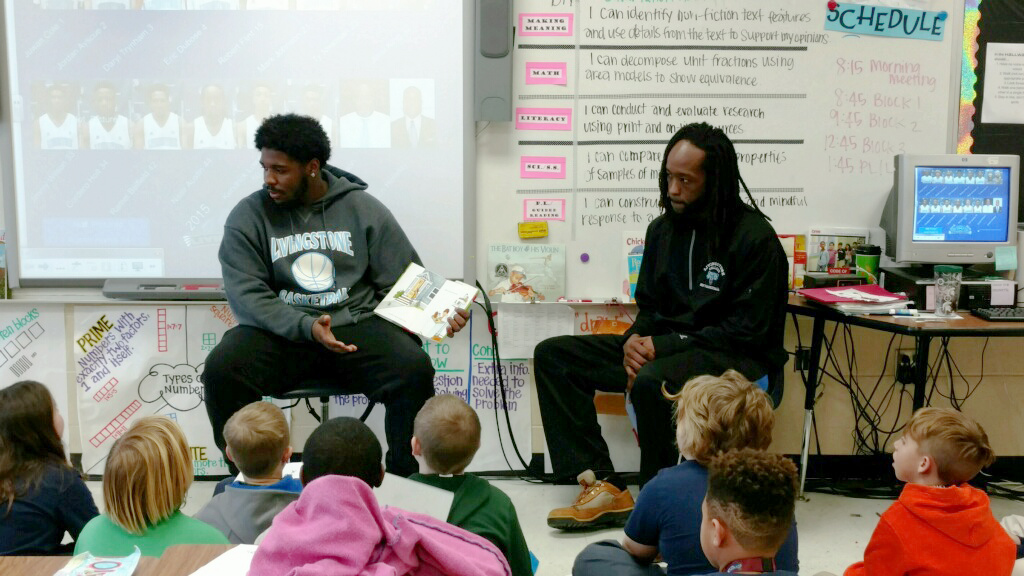 CHARLOTTE – At 6 feet, 8 inches tall, Livingstone College freshman Kendric Lowe towered over students at Winget Park Elementary School Tuesday morning while walking down a hallway. But when he sat down to read “Crazy Like a Fox” to first-graders in Adrian Austin’s classroom, the height difference didn’t seem so dramatic.

After Lowe finished reading the popular children’s book, Ariana wanted to know how tall he was and what he ate or drank to get so tall. Lowe told the student he drinks a lot of milk – and so it went.

Lowe, an accounting major from Greensboro, was joined in Austin’s classroom by teammate Mark Johnson, a senior criminal justice major from Richmond, Virginia. They and other members of Livingstone’s men’s basketball team were at the school to read to children and to stress the importance of doing well in school. It was the third consecutive year Livingstone’s men’s basketball players have visited the school during CIAA Tournament time.

“I think this is a wonderful motivation, not only for getting our kids to read but also in the essence of community service and giving back,” said Assistant Principal Kim White. “A lot of kids are saying ,‘When I go to college, giving back is something I want to do, too.’ ”

White has worked at Winget Park since 2009, where Jason Bissinger is the principal. She couldn’t say enough about Livingstone’s players and the importance of their visit.

“The impact this has on the kids is good,” she said. “To them, the players are celebrities, and we’ve moved toward a balanced literacy initiative in this district so this supports that initiative as well.”

“This is by far one of the best events we have during the CIAA,” Kent said. “The players started asking last week whether they were going to get to go back to Winget Park this year and read to the kids.”

It’s not lost on Winget Park administrators that after each of the past two visits the Livingstone team has gone on to capture the CIAA title. Led by Head Coach James Stinson, Jr., Livingstone won its first CIAA title in 2014 after the Blue Bears defeated rival Winston-Salem State University 83-68 inside Time Warner Cable Arena. The Blue Bears won the title last year after defeating Winston-Salem by another 15-point margin, 106-91.

“We’re expecting great heights out of them again this year,” said Karen Sanders, a fourth-grade science and social studies teacher.

Fifth-grader Ryan Steinmentz, a member of the Winget Student Council, was among the kids who walked with Lowe on Tuesday and said he’s glad the players spent time at his school.

“I think it’s interesting, and I think it’s a good experience for us kids because we get to hear what you have to do to make it to college,” Ryan said.

Lowe and Johnson told the students that playing basketball is fun. But they quickly reminded them that they’re students first and athletes second. After one student asked about their grades, the men said they’re part of a so-called “GPA squad,” comprised of athletes with grade point averages of 3.5 and higher.

Other Livingstone players also got a chance to interact with students Tuesday, including senior guard and psychology major Robert Flint of Landover, Maryland, who read the book “The Wrong-Way Rabbit” to kids. At one point while Flint, Jared Gray, Jimmy Wilson and Jordan Ayscue waited to enter a classroom, fourth-graders Aubrey, Joanna, Courtney, Caroline and Lily, and third-grader Sahar snapped their photos. The girls, members of Winget’s Student Council, said the pictures could show up on Facebook, in Twitter feeds or in the school yearbook.

The Blue Bears were at Winget for 90 minutes on Tuesday. Suffice it to say it was time well spent.

“It’s a great experience for all the kids to meet the players,” said Ajay, a fourth-grader. “It’s really great for the whole team to come and read to everyone here. The kids get really excited when the team comes – and when they win.”

And fourth-graders Daniella and Tyler added that the players are inspirational to them.

Kent said community engagement is critical because it’s important for student-athletes to realize the opportunities they’ve been given come with responsibilities.

“Our engagement also demonstrates to local communities that Livingstone College and The CIAA are committed to supporting those communities that show such amazing support to us,” Kent said. “Winning is important to this staff, to these student-athletes and to our athletic department, but the lasting impact that our community engagement has on the students – and on us – is much more profound.”

Jaime Kent contributed to this article.