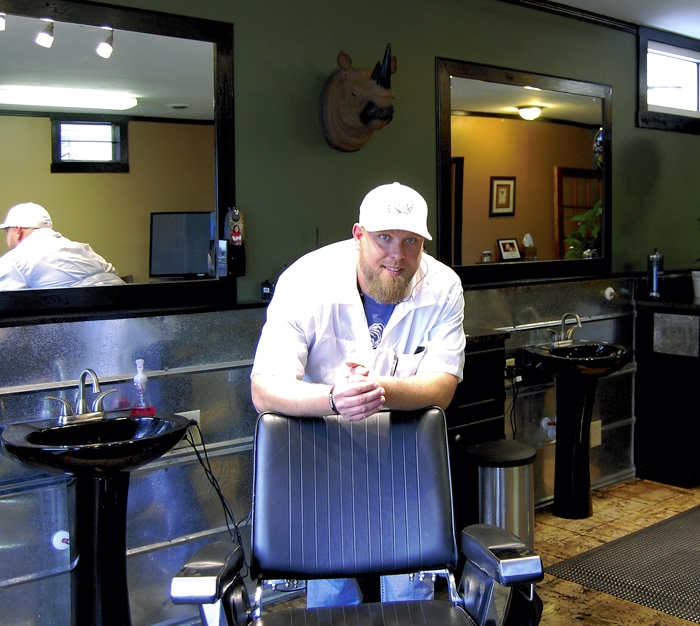 Charlie Dry, a barber for 10 years, has opened a barbershop in Rockwell. Amanda Raymond/Salisbury Post

Charlie Dry got the nickname “Rhino” from his father for being heavy-footed.

“My dad said I came through the house one morning, I’m real heavy-footed, he said, ‘You sound like a big old rhino coming through here,’” Dry recalled. “… It just kind of stuck.”

Dry turned that nickname into the vision and logo for his barbershop — a rhino with a barber’s pole for a horn.

After about three months of renovations, Dry opened Rhino Barbers at 106 China Grove Highway in Rockwell about three weeks ago.

Dry went to Winston-Salem Barber School and has been a barber for 10 years. He had a barbershop in Granite Quarry for three and a half years, but decided renting was not for him.

After negotiating with former owner Mike Fesperman, who used the building for his financial planning firm, Dry now owns the building.

Dry has worked in other industries, but he said he’s been cutting hair his whole life.

“I enjoy helping people look better,” he said. “That’s the main thing. I always put my Facebook post up that I’m cleaning up Rowan County one haircut at a time.”

Dry said being a barber also allows him to have an effect on people. His faith is important to him and he said he has seen some people get saved during his time as a barber, but he has also seen people “go in an opposite direction.”

“I like the fact that I’m put in a position where you can maybe help somebody,” he said.

Dry said since he grew up in Rockwell, it has been nice to come home to a warm reception. He said that as far as he could gather, there hasn’t been a barbershop in Rockwell since the 1970s.

Terry Beaver, of Ace Hardware in Rockwell, owned Beav’s Cutting Edge hair salon in the town, but Dry said Beaver was a cosmetologist, not an “old-fashioned” barber. Dry also said that Beaver has been supportive of his business.

The shop is not just a place for haircuts. Suzanne Barger, a hair stylist and colorist, works at the shop and so does Michele Sloop, a licensed massage therapist.

Dry hopes to add a nail station and tanning beds in the future to make it a “one-stop” type of place for the community.

Dry said the community has been responding well to the business. He has had to stay open one or two hours past closing to accommodate clients, which is a good problem to have, he said.

He said he also has clients from the Concord, Kannapolis and Lexington areas.

“It’s nice to be back in a community where you’re known,” he said.

Dry said he hopes to soon have a matte painting of a rhino crashing through a wall, with two halves of a barber pole broken between its horn, at the new location.