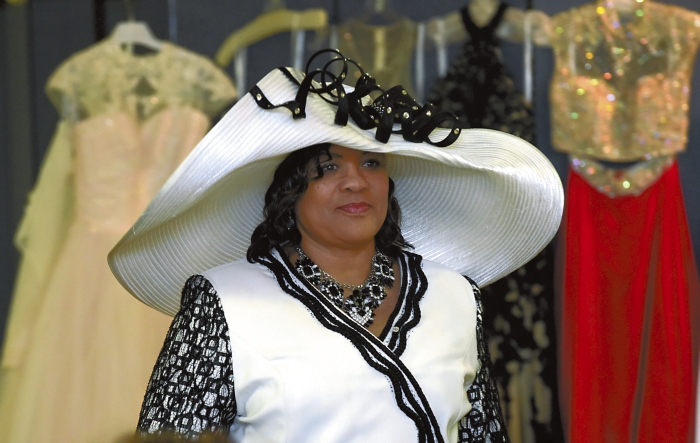 Elder Darcel Gray models a hat and church dress at the African American Fashion Show fundraiser for the Spencer Doll and Toy Museum. photo by Wayne Hinshaw, for the Salisbury Post

Vincia Benjamin Miller, Thomasina Paige and Brenda Neely hosted the event. It was held at the Spencer Women’s Club and proceeds went to the Spencer Doll and Toy Museum.

Linda Sherrill, who helps out at the museum, said the museum tries to showcase different cultures.

“It’s just important for the museum to educate people and Black History Month is very, very important in our culture,” she said.

About 25 people attended the event, and some even took advantage of the invitation to wear any traditional African clothing that they had.

Paige started off the night by showcasing traditional African styles and the influences other cultures had on them.

Paige said the people of Africa do not live in a cultural vacuum. Once while visiting Kenya, Paige said she tied her head wrap high on her head, thinking that was how everyone else would be wearing it.

“The chicks in Kenya, the part that I was at, they had on Paris fashions with their fabric,” she said, laughing. “I’m trying to be really African and here they are being influenced by the people that are around them.”

Paige also took a sheet of fabric and showed the audience how some Africans tied it around themselves to make dresses. She then demonstrated different ways of tying a head wrap.

“By the time you finish, it’s just something new every time you do it,” she said.

Paige turned the microphone over to her sister, Shirl Hull. Hull had a table display with different cloths from different parts of Africa. There was a piece of light brown cloth from the Democratic Republic of the Congo with dark brown geometric-shaped patterns on it, and a shiny wax cloth filled with dark and light blues and curved orange shapes that was influenced by Indonesia.

There were also cloths from Mali and Ghana. Ed Hull, Shirl Hull’s husband, took some of the pieces of cloth around the room to let the audience get a closer look and even feel the material.

“Most cloth from Africa tell a story,” Shirl Hull said. “Symbols have meanings.”

Attendee Katrina Lashley said she enjoyed learning about the importance of the different symbols on the cloths that Hull displayed.

“I kind of figured that some of the material represented a story, but I never realized how in depth that story could be,” Lashley said.

Next, it was time for the models to strut their stuff down the aisle. Vincia Benjamin Miller announced the models and described their attire.

Valerie Keaton wore a two-piece kente cloth suit with orange, green and black colors in the patterns, along with a matching kente cloth head wrap.

Isha Holmes wore a pants suit inspired by African styles. The suit had a rust red, black and white colors on it with gold embroidery.

The models then changed into their Sunday best.

Satara Mclean wore a tan striped skirt, a navy blue blouse with copper buttons on the sleeves and a navy blue hat with sequins to top it all off.

Sherry Lykes almost brought the house down with her outfit. Along with her black knit suit, she wore a royal blue and black flop hat that came down to her shoulders and upper back, plus a pair of sparkling rhinestone pumps.

There was applause, ohs and ahs and laughter as the models worked it around the room.

After the models stood together for their final round of applause, Brenda Neely took the audience on a tour of dresses inspired by African American style icons and designers.

“There have been many, many successful black designers who have broken barriers through their design, beauty and innovation and style,” Neely said. “Some of them, however, were never given credit for the things that they had done.”

She talked about Ann Lowe, an African American designer who created a wedding dress for Jacqueline Kennedy, wife of 35th president John Kennedy. She also designed the dress that Olivia de Havilland wore when she won an Oscar for best actress for her performance in the 1946 movie “To Each His Own.”

Neely, owner of A Perfect Dress special occasion shop in China Grove, showcased some dresses from her shop. One was a short beaded dress inspired by the 1920s period. Another dress inspired by First Lady Michelle Obama’s style was sleeveless and champagne-colored under black lace. There was also a pink crop-top dress inspired by outfits actress Kerry Washington and singer Taylor Swift have worn.

Attendee Eleanor Qadirah, founder and president of the Rowan Blues and Jazz Society, said she wishes she brought her mother, Ruth Booker, to the event. She said the show reminded her of the modeling she and her mother used to do with their own original creations.

“It’s nice to remember the fashions that we used to create,” she said.

“I thought it was better than it was last year,” she said. “It was more put together. I hope they do it again.”

The attendees were served refreshments and could enter a raffle to win different prizes, including African American dolls.

After the event, the audience was invited to visit the Doll and Toy Museum.

Black History Month: a mix of photographs from the…