Protect your guns against theft 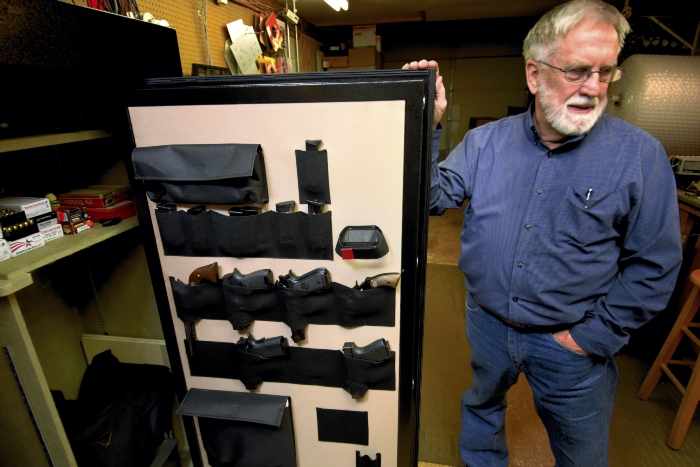 JON C. LAKEY / SALISBURY POST Many gun owners store their firearms in large safes to protect to keep them from getting into the wrong hands and protect them from fire. Ken Andrews stores his weapons and ammunition in this large safe. Safes also reduce liability that comes with gun ownership.

When he was 16 years old, Ken Andrews received his first gun — a .22 rifle — and over the last 52 years, he’s added to his gun collection.
“For many years, I only had two or three guns. It was only in recent years that I got more and it was important for me to have a gun safe,” Andrews said.

He bought his gun safe three years ago and has taken measures to protect his home and ensure his guns are secured from would-be thieves.

Theft
These guns oftentimes end up in the hands of people who commit crimes.
“Stolen guns are either sold on the street to make money, used for protection, or used to commit other crimes,” said Police Capt. Shelia Lingle.

She said there is a market for people who don’t legally qualify to buy a gun.
“It is cheaper to buy an illegal gun on the street than in a gun shop,” Lingle said.

Sheriff Kevin Auten said guns are popular items to steal because of the value.
“Suspects steal items that potentially will give them the most benefit,” Auten said.

Protection
Auten advises homeowners secure weapons in a lock box, vault or gun safe.
The owner should check on the weapons on a routine basis to make sure they are still located where they are supposed to be, he said.

“I have had citizens call about missing guns and they will say that it had been months and sometimes years since they had seen the missing item,” Auten said.

Andrews said he bought his gun safe to protect his collection against thieves.
He said if he and his family go on vacation, then he knows the guns are secured in the gun safe and the house is protected.

Andrews said regardless of how a person locks their guns away or what method is used, all that matters is that a gun owner does “something to keep the firearms safe and still be able to use them if needed.”

“You also have to be careful that a friend, adult or their child doesn’t accidentally come into contact with your gun,” he said.

Andrews said he has the serial numbers of each gun he owns recorded.
“Whether you have one or 20, you should have a good accurate record,” Andrews said.

He said all gun owners should take pictures of their guns as well as write down a gun’s model and serial numbers so that “if something does happen, you have a record and it makes it easy to identify the gun if it is stolen,” Andrews said.

If a gun is stolen, Andrews said, it’s important to report the theft immediately, because “you don’t know where it’s going to end up.”

Auten also shared the the same suggestion, saying it’s not a bad idea to record the serial numbers of other items including electronics, power tools and appliances.

He said if the item doesn’t have a serial number, it would help to identify it if stolen if the owner engraves their name or driver’s license number on it. He warned against using a social security number and said serial numbers should be kept in a secure location or even in multiple locations.

He said of all the guns stolen in 2015, the owners could only provide serial number for 69 of them.

The rest of those guns stolen, Auten said, will probably never be recovered even if the officers find the weapon on a search of a house or a vehicle.

“The problem is that people are so transient and criminals move around so much that every officer in every department has no way of knowing about every stolen item,” Auten said.

Lingle said gun owners should not keep weapons unattended inside a vehicle.
She also recommended taking pictures and recording serial numbers of guns.

Missing
Missing or stolen guns that are reported stolen are entered into a national database, the National Crime Information Center (NCIC), which is used by officers to track stolen property, missing people and criminal record history.

When the weapon is reported stolen, the officer will enter it through the database. Officers who come across a weapon while on patrol or if they find a gun during a traffic stop or during a search of a home, they will automatically check this database, Lingle explained.
People who break into a home or vehicle are thieves, she said.

“They break into homes or vehicles to get money or property they can sell on the street to make money,” Lingle said.

She added thieves don’t usually steal guns for the purpose of committing other crimes, but the agency does see that as a common theme.
Thieves know how and where to dispose of stolen items, Auten said.

“I am sure some guns bring better prices than others. Individuals that use guns in other crimes probably desire handguns over long guns,” Auten said.

He said he believes thieves want handguns rather than long guns because of the ease of concealing a handgun.

In January, Salisbury Police arrested and charged Reine Struggy Augustin, 16, with having a gun with an altered serial number. Not only was it illegal for the teen to possess a handgun, it is likely the gun was not his.

Investigators are still working to determine the owner of the gun and to recover the serial number that was scratched off.