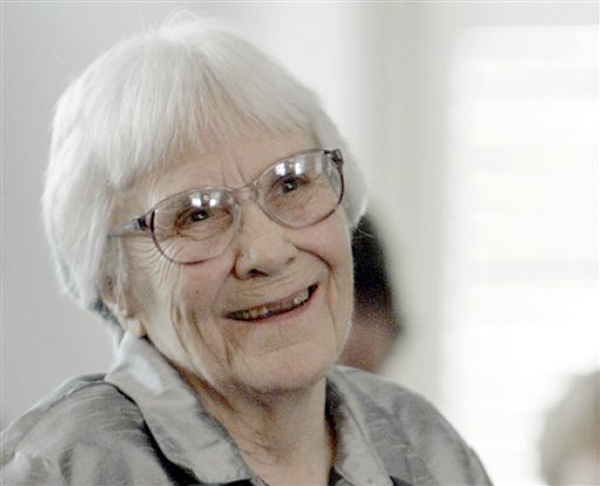 FILE - In this Aug. 20, 2007, file photo, author Harper Lee smiles during a ceremony honoring the four new members of the Alabama Academy of Honor at the Capitol in Montgomery, Ala. Harper Lee, the elusive author whose "To Kill a Mockingbird" became an enduring best seller and classic film with its child's-eye view of racial injustice in a small Southern town, has died according to Harper Collins spokeswoman Tina Andreadis. She was 89. (AP Photo/Rob Carr, File)

Harper Lee, ‘To Kill a Mockingbird’ author, has died at 89

By Kendal Weaver and Hillel Italie

NEW YORK  — Harper Lee, the elusive novelist whose child’s-eye view of racial injustice in a small Southern town, “To Kill a Mockingbird,” became standard reading for millions of young people and an Oscar-winning film, has died. She was 89.

For most of her life, Lee divided her time between New York City, where she wrote the novel in the 1950s, and her hometown of Monroeville, which inspired the book’s fictional Maycomb.

“To Kill a Mockingbird,” published in 1960, is the story of a girl nicknamed Scout growing up in a Depression-era Southern town. A black man has been wrongly accused of raping a white woman, and Scout’s father, the resolute lawyer Atticus Finch, defends him despite threats and the scorn of many.

The book quickly became a best-seller, won the Pulitzer Prize and was made into a memorable movie in 1962, with Gregory Peck winning an Oscar for his portrayal of Atticus. As the civil rights movement grew, the novel inspired a generation of young lawyers, was assigned in high schools all over the country and was a popular choice for citywide, or nationwide, reading programs.

By 2015, its sales were reported by HarperCollins to be more than 40 million worldwide, making it one of the most widely read American novels of the 20th century. When the Library of Congress did a survey in 1991 on books that have affected people’s lives, “To Kill a Mockingbird” was second only to the Bible.

Lee herself became more mysterious as her book became more famous. At first, she dutifully promoted her work. She spoke frequently to the press, wrote about herself and gave speeches, once to a class of cadets at West Point.

But she began declining interviews in the late 1960s and, until late in her life, firmly avoided making any public comment at all about her novel or her career. Other than a few magazine pieces for Vogue and McCalls in the 1960s and a review of a 19th century Alabama history book in 1983, she published no other book until stunning the world in 2015 by permitting “Go Set a Watchman” to be released.

“Watchman” was written before “Mockingbird,” but was set 20 years later, using the same location and many of the same characters. Readers and reviewers were disheartened to find an Atticus who seemed nothing like the hero of the earlier book. The man who defied the status quo in “Mockingbird” was now part of the mob in “Watchman,” denouncing the Supreme Court’s ruling that school segregation was unconstitutional and denouncing blacks as unfit to enjoy full equality.

But despite unenthusiastic reviews and questions whether Lee was well enough to approve the publication, “Watchman” jumped to the top of best-seller lists within a day of its announcement and remained there for months.

Much of Lee’s story is the story of “Mockingbird,” and how she responded to it. She wasn’t a bragger, like Norman Mailer, or a drinker, like William Failkner, or a recluse or eccentric. By the accounts of friends and Monroeville townsfolk, she was a warm, vibrant and witty woman who enjoyed life, played golf, read voraciously and got about to plays and concerts. She just didn’t want to talk about it before an audience.

Claudia Durst Johnson, author of a book-length critical analysis of Lee’s novel, described her as preferring to guard her privacy “like others in an older generation, who didn’t go out and talk about themselves on Oprah or the Letterman show at the drop of a hat.” According to Johnson, Lee also complained that the news media invariably misquoted her.

Lee emerged more often over the past few years, although not always in ways she preferred. She was involved in numerous legal disputes over the rights to her book and denied she had cooperated with the biography “The Mockingbird Next Door: Life WithHarper Lee,” by Marja Mills.

Other occasions were happier. She wrote a letter of thanks in 2001 when the Chicago Public Library chose “Mockingbird” for its first One Book, One Chicago program. In 2007, she agreed to attend a White House ceremony at which she received a Presidential Medal of Honor. Around the same time, she wrote a rare published item — for O, The Oprah Magazine — about how she became a reader as a child in a rural, Depression-era Alabama town, and remained one.

“Now, 75 years later in an abundant society where people have laptops, cell phones, iPods, and minds like empty rooms, I still plod along with books,” she wrote.

By 2014, she had given in to the digital age and allowed her novel to come out as an e-book, calling it “‘Mockingbird’ for a new generation.”

Born in Monroeville, Alabama, Nelle Harper Lee was known to family and friends as Nelle (pronounced Nell) — the name of a relative, Ellen, spelled backward. Like Atticus Finch, her father was a lawyer and state legislator. One of her childhood friends was Truman Capote, who lived with relatives next door to the Lees for several years. (A book aboutLee in 2006 and two films about Capote brought fresh attention to their friendship, including her contributions to Capote’s “In Cold Blood,” the classic “nonfiction novel” about the murder of a Kansas farm family.

Capote became the model for Scout’s creative, impish and loving friend Dill. In the novel, Dill is described as “a pocket Merlin, whose head teamed with eccentric plans, strange longings, and quaint fancies.”

Lee’s friendship with Capote was evident later when she traveled frequently with him to Kansas, beginning in 1959, to help him do research for what became his own best-seller, “In Cold Blood.” He dedicated the book to her and his longtime companion, Jack Dunphy, but never acknowledged how vital a role she played in its creation.

Charles J. Shields, in the first book-length attempt at a biography of Lee, “Mockingbird: A Portrait of Harper Lee,” showed how Lee helped Capote gain entrance to key figures in the murder investigation and provided keen observations and myriad notes that Capote wove into his book. (He also debunked a long-standing rumor that Capote had actually written much of “Mockingbird.”)

In the 2005 film “Capote,” Philip Seymour Hoffman won the best actor Academy Award for his portrayal of Capote struggling with his demons as he works on the book. Catherine Keener was nominated for an Oscar for her portrayal of Lee. The next year, Sandra Bullock took the role of Lee in “Infamous,” with Toby Jones as Capote.

Lee said in the 1960s that she was working on a second novel, but over time it dropped from view and never reached a publisher.

Lee researched another book, a non-fiction account of a bizarre voodoo murder case in rural east Alabama, but abandoned the project in the 1980s.

Lee, who attended Huntingdon College in Montgomery as a freshman, transferred the next year to the University of Alabama, where she wrote and became editor of the campus literary magazine. After studying to be a lawyer like her father and older sister,Lee left the university before graduating, heading to New York to become a writer, as Capote already had done.

Lee worked as an airlines reservation clerk in New York City during the early 1950s, writing on the side. Finally, with a Christmas loan from friends, she quit to write full time, and the first draft of “To Kill a Mockingbird” reached its publisher, J.B. Lippincott, in 1957.

The manuscript, according to the publishing house, arrived under the title “Atticus.” The title later became “To Kill a Mockingbird,” referring to an old saying that it was all right to kill a blue jay but a sin to kill a mockingbird, which gives the world its music.

Lee worked with the editor Tay Hohoff in bringing the book to its final form, a period when Lee was scrimping financially and dealing with the difficulties of rewriting.

“Though Miss Lee then had never published even an essay or a short story, this was clearly not the work of an amateur or tyro,” the editor wrote in an account published by Lippincott in 1967. “… She had learned the essential part of her craft, with no so-called professional help, simply by working at it and working at it, endlessly.”

Capote, in a letter to an aunt in July 1959, said that a year earlier Lee “showed me as much of the book as she’d written, and I liked it very much. She has real talent.”

Her novel, while hugely popular, was not ranked many scholars in the same category as the work of other Southern authors such as Eudora Welty or Flannery O’Connor. Decades after its publication, little was written about it in scholarly journals. Some critics has called the book naive and sentimental, whether dismissing the Ku Klux Klan as a minor nuisance in Maycomb or advocating change through personal persuasion rather than collective action. The novel was also considered patronizing for highlighting the bravery of a white man on behalf of blacks.

Parallels were drawn between Lee and Margaret Mitchell, another Southern woman whose only novel, “Gone With the Wind,” became a phenomenon and was made into a beloved movie. But Mitchell’s book romanticized the black-white divide; Lee’s work confronted it, although more gently than novels before and since.

Lee’s book features Scout’s often meandering recollection of the people — some eccentric, such as the reclusive Boo Radley — in rural Maycomb County, during the years when her brother Jem reaches adolescence and she enters school. Some critics said it relied at times on stereotypes, such as the mean, trashy whites making false charges against a virtuous black. But the tomboy Scout and the quietly courageous Atticus Finch drew praise as memorable, singular creations.

The book’s tension is built around the lynching atmosphere in Maycomb as the black man goes on trial, a scenario reminiscent of the Scottsboro Boys rape case of the same period. Scout, Dill and Jem, whose playful curiosity takes scary turns, witness the drama of an adult world with its own frightening lessons.

“Surely it is plain to the simplest intelligence that ‘To Kill a Mockingbird’ spells out in words of seldom more than two syllables a code of honor and conduct,” Lee wrote to an editor in the 1960s. “Christian in its ethic, that is the heritage of all Southerners.”