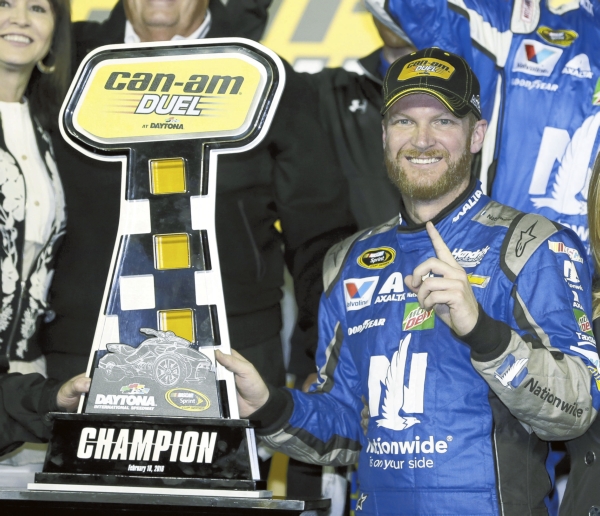 DAYTONA BEACH, Fla. (TNS) — Dale Earnhardt Jr. was letting his mind wander as he tried to keep his racecar in one piece. It was if he knew somebody up there was watching.

“I was day-dreaming a little bit of winning this race because of the night,” he said. “I’m glad I didn’t tear the car up because that would have been embarrassing on a day like this.”

Fifteen years to the day Thursday, the track he just raced on claimed his famed father, Dale Earnhardt Sr.

The son honored his dad’s memory the best way possible: he climbed into a car and won a race.

Dale Jr. won the first Can-Am duel that sets almost half the field for the Daytona 500, holding off a charging Joey Logano, the defending 500 champion.

Fittingly enough, Dale Jr. did it a little like Dale Sr.

He made his move with five laps to go. He went full bore and to the floor, although Junior didn’t shove anybody out of the way in true Intimidator style like his old man.

“Everybody knows how important getting the lead is and how important it is to keep it … be aggressive, blocking, trying not to allow them to get up on my quarter-panel,” he said, all but channeling the late driver of the iconic No. 3.

“I was so nervous today about tearing the car up versus what we have (as a backup). But you can’t hold back any cards when there’s a trophy out there.”

And Junior certainly sounded like a chip off the old engine block, expressing his utter joy of NASCAR going back to the way racing used to be in his dad’s day: every man for himself.

He despised the way drivers had to race a few years ago, in tandems, because of the aerodynamic nature of the machines in the draft.

Thursday night, Dale Sr. would have been happy that the show finally was turned over to the cars and the stars.

Much of the run-up to the 500 had been focused on the home improvements made at the storied speedway.

It’s a new age for the 57-year-old track. Yeah, Richard Petty might roll his eyes at Twitter and Snapchat because, well, The King was social media before there was social media.

They can gussy the place up with throw pillows and serve finger food. But the heart of the sport is still found on the asphalt, hearty fans watching daredevils run in circles as fast as they can.

NASCAR returned at last after a long winter’s nap, and the first Can-Am duel passed as a soft opening for the venue.

Daytona 500 officials couldn’t have scripted it better: a household name essentially cutting the ribbon to open the brand-spanking-new house.

There was the excitement of the superspeedway coming into the 21st century … but also the solemn reminder of the perils of the past.

As they have every year since his death at 49, fans were expected to hold a candlelight vigil at Dale Earnhardt Inc. in Mooresville, N.C.

Tweeted Kyle Petty, “Remembering a (hashtag)NASCAR legend today. So grateful I got the chance to race alongside one of the best. (hashtag)3.”

“I told you how much I like people remembering dad and talk about dad,” he said, his voice cracking. “It warms my heart to see stuff on social media on day like this. Even the (Atlanta) Braves (tweeting) and stuff.

“It’s real special. I was thinking about that. I try not to make it too big a deal.”