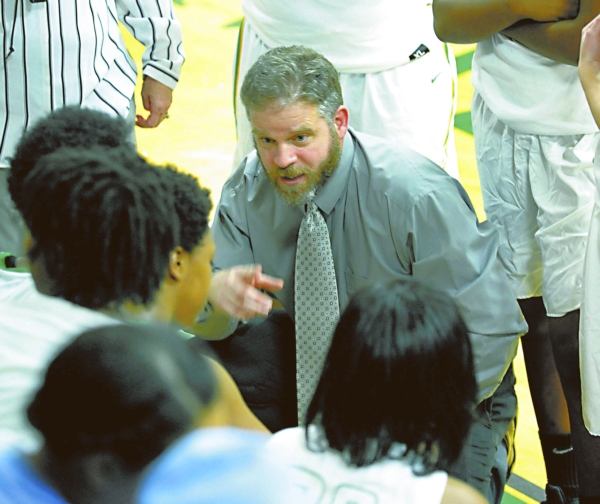 LEXINGTON — It was a battle of the ages in more ways than one.
North Rowan seniors Aliyah Farmer and Special Washington held off Salisbury’s youngsters in the last two minutes, and the Cavaliers prevailed, 46-40, in Thursday’s ferocious Central Carolina Conference semifinal.
All of North’s 15 fourth-quarter points in the neutral Lexington gym came from Farmer, Washington and another senior — Tre Allen.
Farmer delivered the pivotal bucket, a right-side layup off a dish from a driving Washington when the score was tied 39-all with 1:25 remaining. After that, soaring defensive rebounds and free throws by Farmer and two calm free throws by Washington sealed victory.
“Farmer just took over at the end and we couldn’t keep her off the boards,” Salisbury coach Lakai Brice said. “Too many turnovers and too many fouls, but we did play them tough. We just fell a little bit short.”
North (17-6) moves on to tonight’s tournament championship game against second-ranked and top-seeded East Davidson. Third-seeded Salisbury (14-11) moves on to the state playoffs with boosted confidence.
Second-seeded North played without an ill Brianna White, the team’s No. 3 scorer and No. 2 rebounder. That was part of the reason the Hornets had a genuine chance at an upset.
“It hurts us not having White, but most of what happened tonight was due to Salisbury’s girls getting better,” North coach Brian Lytton said. “We took some risks on defense because we’ve gotten away with taking those chances against Salisbury in the past. But tonight we weren’t very disciplined on defense, and Salisbury made us pay with a lot of layups.”
The first half belonged to Salisbury’s 6-foot freshman Bryanna Troutman, who averages 13.3 points, 7.0 rebounds and 2.5 blocks. Troutman seemed to reject every layup North attempted in the first half and she also seemed to get every rebound. She also made two 3-pointers.
Troutman sparked Salisbury to a 12-11 lead after a quarter and the Hornets led 22-17 late in the second quarter before Farmer got back-to-back buckets to trim Salisbury’s halftime lead to 22-21.
“Salisbury was hustling more than I’ve seen them do, and you just can’t shoot over Troutman,” Washington said. “They’ve got a good coach. They’re getting better every time we see them.”
The turning point in the game came midway through the third quarter when Troutman got her third foul trying to block a power layup by Farmer. Then she got her fourth foul 30 seconds later.
“We were surprising North with how hard we were attacking the rim up until then,” Brice said. “Bryanna’s third and fourth fouls coming back-to-back like the did changed the game. When she went back in with four fouls, she couldn’t be as aggressive. That’s when Farmer took over.”
North took a five-point lead on buckets by Makala Lytton and Washington immediately after Troutman got in foul trouble, but a 3-pointer by sophomore Maria Capito and a free throw by freshman Tacorra Robinson cut the Cavs’ lead to 31-30 entering the final eight minutes.
“The biggest thing was our confidence,” Capito said. “This was the third time we’ve played North and we know how they play and we knew what we needed to do. We used to lose our confidence in games like that, but tonight we kept our confidence up right to the end.”
Washington started the fourth quarter with a three-point play for a 34-30 North lead. After Mystjkal Phifer scored for the Hornets, Farmer got a stick-back and two free throws and the Cavaliers led, 38-32.
Then, even with Troutman fouling out on a soft bump of Allen near mid-court, the inspired Hornets scored six straight points to re-tie the game. Phifer, a junior, fought for a stick-back. Junior Tyzarea Alexander made two free throws and got a layup off a steal.
When Phifer made a free throw with 2:03 remaining, the Hornets led 39-38.
But North’s veterans handled the end-of-game pressure situations better than the Hornets, who tossed careless passes and launched low-percentage shots.
Washington made a free throw for a 39-all tie. Then Washington found Farmer for the layup that put North ahead to stay. That duo has communicated and connected dozens of times on that same play this season.
“Every time I drive I know where Aliyah is,” Washington said. “She made the shot.”
Coach Lytton wasn’t thrilled with how his team played.
“We did make our layups and free throws at the end,” he said. “But if we’d made them earlier, we wouldn’t have been in such a tight spot.”
He admitted the Cavaliers will have to be better in tonight’s championship game if they’re going to challenge an East Davidson squad that is 24-1 and has beaten North twice.
He also acknowledged that the Hornets can be a force in the future.
“They’re going to be tough to contend with,” Lytton said.