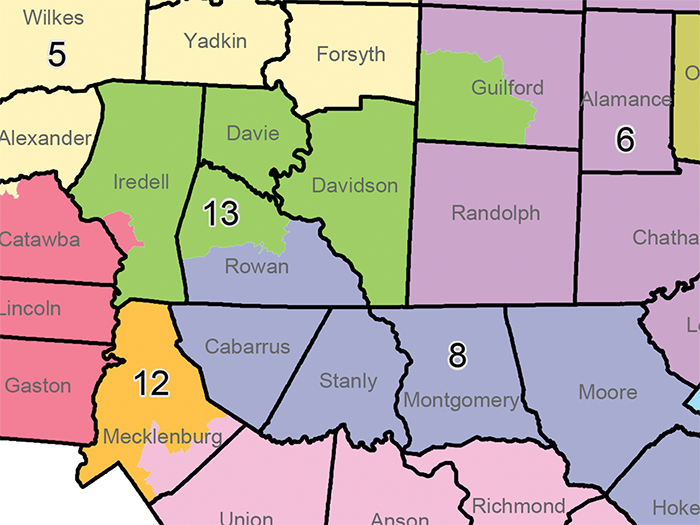 A map approved by the N.C. Senate on Thursday would split Rowan County between the 8th and 13th congressional districts.

Proposed new North Carolina congressional maps show Rowan County split between two districts — only one of them among the three that take in parts of Rowan now.

State legislators will be in Raleigh today to consider new maps of North Carolina’s congressional districts.

The maps would put two incumbents in the same district and create a new district in Mecklenburg County without an incumbent. The boundaries, released Wednesday, attempt to respond to a federal court ruling that struck down the 1st and 12th Districts. Federal judges said the districts were racially gerrymandered. Republicans disagree with the ruling but created new lines to ensure they meet the judges’ order that a new map be drawn by Friday. The U.S. Supreme Court is weighing whether to stop that order.

Redrawn maps must be approved by the North Carolina General Assembly, which is scheduled to meet this morning for a special legislative session. Gov. Pat McCrory Wednesday afternoon called a special session for 10 a.m. today.

“If we don’t stay on schedule, with all the time and effort and millions already spent, it’s going to be a mess,” Ford said. “I mean it’s already going to be a mess going into this session, but changing things up now doesn’t make it any better.”

Ford said he hoped to keep districts close to their current layout.

Warren on Wednesday evening said he hadn’t received any communication about what specifically he would be voting on.

“Maybe there will be some solicitation of our input or we could see maps tomorrow,” Warren said. “We really haven’t been kept intimately in the loop as to what’s going on.”

He said legislators had hoped to know by now whether the U.S. Supreme Court would delay enforcement of a lower court’s gerrymandering ruling. The court hadn’t made a decision by Wednesday evening whether to delay enforcement.

He said it would be legislators’ job to have a clear understanding of what judges want, then approve maps that disrupt congressional districts as little as possible.

Congressional maps introduced Wednesday, however, would make significant changes to congressional districts in and around Rowan. The snake-like shape of the 12th District, currently represented by Rep. Alma Adams, would be eliminated. It would replaced with a more compact district in Mecklenburg County. The 12th District currently snakes through Rowan, but wouldn’t under the proposed map. The 5th Congressional District would also no longer extend into Rowan.

The map is considered a contingency plan in case the Supreme Court doesn’t delay enforcement.

If the maps are used, it would not affect the candidacy of those who have already filed. Members of the U.S. House are not required to live in the districts they serve. The maps, however, would likely affect a number of voters in Rowan.

Man on trial for murder had been informant for…