In Raleigh, Smith proved he could work across the political aisle 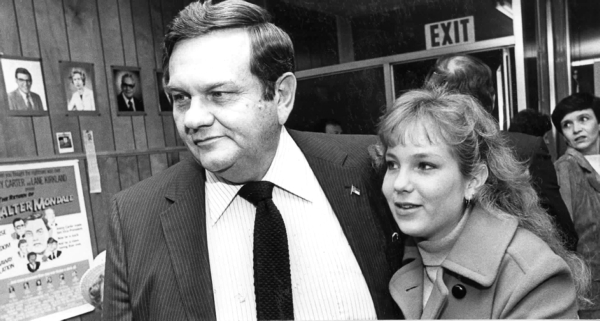 (File photo) Paul Smith, left, with one of his daughters during an Election Night victory.

SALISBURY — When Paul Smith, serving as chairman of the Rowan County Board of Commissioners, abruptly changed his party affiliation from Democrat to Republican in 1979, it caused quite the political stir.

it also cost Smith the chairmanship the next time his fellow commissioners took on the then annual task of electing a new chairman. When asked why he changed parties, Smith would only say the Democratic Party asked him to sacrifice his principles, so he decided to sacrifice the party.

He never elaborated, but Smith’s political instincts proved fortuitous. Smith was on the leading edge of a local political revolution that saw the GOP become the dominant party in Rowan County.

Smith ran as a Republican for the N.C. Senate in 1980 and won. After a hiccup and a 1982 re-election bid loss, Smith captured the first of six more Senate terms in 1984, becoming one of the more influential Republicans in the General Assembly and wrangling fellow GOP senators as minority whip during Gov. Jim Martin’s eight years in office.

Smith died last Thursday in the N.C. State Veterans Home at the age of 88.

“He was not a blustery type,” said former state Rep. Charlotte Gardner, whose own Republican political career shadowed Smith’s for many years. “He appeared to be a very laid-back guy, He could get ruffled, and he spoke out when he had to, but the one thing I learned from Paul was you should listen twice as much as you speak — and I think that applied to Paul.”

Smith’s Senate district over the years touched Rowan, Davie, Davidson and Iredell counties. In Raleigh, it seemed he never turned down an appointment and served on many high-profile boards and committees.

Terry Osborne, general manager of the Rowan/Kannapolis Alcoholic Beverage Control Board and a former Rowan GOP chairman, said Smith was well respected on both sides of the aisle in the General Assembly.

Whenever Osborne was in Raleigh on business, he made a point to stop in and see Smith, and after Smith retired from the Senate, Osborne often would see him at restaurants and the two would sit together and have long chats.

“He was an individual you had a lot of respect for,” said Osborne, whose first memory of Smith actually went back to Little League baseball when Osborne played for the Lions Club and Smith was coaching the St. John’s Lutheran team.

Phil Kirk, once a young GOP senator from Rowan and later Martin’s chief of staff and chairman of the State Board of Education, also described Smith as an effective legislator who believed in working across the political aisle.

“Sen. Paul Smith took a chance on my candidacy for the N.C. Senate 46 years ago when he, as a Democrat, endorsed me, contributed and raised money for my campaign,” Kirk said Monday.

“When he later came to Raleigh as a Republican, I enjoyed lobbying him on behalf of the North Carolina Chamber (then the NCCBI).”

Kirk said Smith understood business issues and the need for a tax climate that would attract jobs to North Carolina. Kirk also considered him a strong supporter of education at every level.

“He worked effectively with both Republicans and Democrats, a quality we need in more of in our public officials these days,” Kirk said. “He was a person who believed in working hard, studying the issues and keeping his word and commitments.”

Smith came to be the ranking minority member on many important Senate committees, serving as vice chairman for both Education and Finance. He also served on Public Utilities, Insurance, Transportation, Highway Oversight, Low-Level Radioactive Waste, Manufacturing and Labor, Redistricting and the Utility Review Board.

In addition, Martin appointed Smith to the Southern Regional Education Board and the Governor’s Advisory Budget Commission.

But there was more and always seemed to be columns of activities on Smith’s resume. He served on the 1991-92 Federal Budget and Taxation Committee of the N.C. Southern Legislative State/Federal Assembly in Washington, D.C.; the National Conference of Insurance Legislators; the Telecommunications Committee of the American Legislative Exchange Council; and the Public School Forum of North Carolina.

Gardner, who lived close to Smith in the neighborhoods off Statesville Boulevard, said in the days when she was first considering a candidacy for the N.C. House, she often would ride a bicycle over to Smith’s house and ask his advice.

“He was a mentor to me,” Gardner said. “… He gave me pointers along the way, and from time to time, I would touch base with him.”

Smith encouraged Gardner to run, though “Republicans were not very favored at that point,” she said. “It gave you a lot of pause to even think about it.”

Gardner lost her first bid for a Rowan County House seat in 1982, a year that was tough for Smith and other Republicans. But running as a team with fellow Republican Brad Ligon in 1984, Gardner captured her first of eight terms.

When Gardner and Smith were in the legislature together, she often caught rides to Raleigh with Paul and Alda, his wife of more than 65 years.

“I really appreciated his advice and his help along the way,” Gardner said. “He was a great boost.”

A Salisbury native and 1948 graduate of Boyden High, Smith was a U.S. Navy veteran.

In business, Smith was longtime executive vice president of sales and marketing for Holding Brothers Texaco. He earned many industry and small business awards during his career.

Likewise, he  received numerous honors for his community involvement. He was deeply involved in Scouting, serving as Scoutmaster for St. John’s Lutheran and on the Central N.C. Council advisory board. He received the Boy Scouts’ Order of the Arrow and the Scouter’s Key.

Smith served as president of the Chamber of Commerce, the Merchants Association, Rowan Oil Dealers, the Sales and Marketing Executives Club and was a budget chairman for United Way.

Smith also served on advisory boards for the N.C. Transportation Museum, Salvation Army and the N.C. Poverty Project and was a 46-year member of the Salisbury Rotary Club. Smith held many duties at St. John’s Lutheran, where he was a lifelong member.

When Smith dived into politics, he did it with the same kind of enthusiasm he had given his business, community and church interests.

Paul and Alda Smith had three children and five grandchildren. A memorial service will be held at 2 p.m. Wednesday at St. John’s, 200 W. Innes St.

Yesterday: Going through the drills at Livingstone College