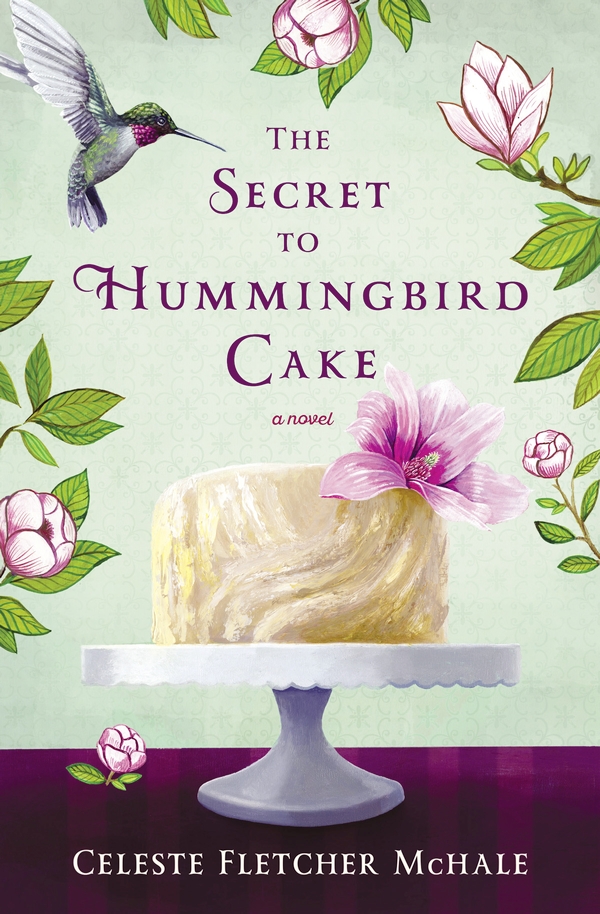 Author Celeste Fletcher McHale will be at Literary Bookpost on Saturday, Feb. 13 at 1 p.m., to talk about and sign her book about friendship, loss and love.

Talking to Celeste Fletcher McHale is a hoot. She’s full of sass and says what she thinks.

She tells jokes on herself and others, spouts cliches and still can’t believe she’s a published author.

What happened was, to keep it short, a close friend died. Celeste couldn’t cry; she sat down to write, self-published a book and was picked up by a mainstream publisher.

She has never written anything before but bills. She had absolutely no idea she was going to publish a book or how it was even done.

She feels bad that people in her online writing group haven’t had success, so she hasn’t gone back to it.

What she wrote is “The Secret to Hummingbird Cake.”

“I am in the book. I told it from my perspective. I didn’t try to whitewash it. I was in a bad place at the time.

“I live in a small town and I was fooling around. Do you think people didn’t know that? Crap, everyone knows it anyway.”

Her friend, Lynn, died of ovarian cancer eight years ago. She was part of a trio of ladies who had a lot of fun; she was the calm one.

One day, Celeste was sitting on the porch, remembering a “night Lynn was part of that was very funny.”

She wrote it down and sent it to their other friend, Emily Jo. “I was just toying around.” Her friend asked her to write more.

And she did. Lynn helped her. “She had her fingers on this since day one. Stuff don’t happen like this. … I went to her mother and asked her to read it. … I told her if it upset her, it would go no further than me and Emily Jo.”

She had gotten to the chapter “where it was time for her to pass. I hadn’t grieved. I’m not a crier. I just get mad. Emily Jo cries at TV commercials.”

Celeste never visited Lynn’s grave. “I just couldn’t. She’s not there. It was hard for me.” Celeste didn’t realize she was grieving until she started writing. “It was God’s way of helping me. I picked it up in July and I cried for a solid month.”

Celeste remembered her friend as a person children loved. “She taught until she couldn’t stand up anymore.” Celeste and Emily Jo had offered to take her any where. She just wanted to teach.

The three had been close friends for more than 20 years. “It was like we played off each other.” After Lynn died, Celeste and Emily Jo just sat and stared at each other.

“I have no kind of background in writing. I wrote plays for the kids. I was the class clown. I always had a story ready if we got caught.”

No one looked at the book before Celeste self-published it. It started selling so well, people asked for it. She took it to festivals and shows and it sold out every time. Then people suggested she look for a traditional publisher.

“That was foreign to me. I needed ‘Getting Published for Dummies.’ …I joined some online groups and they taught me about query letters and agents.” The query letter was supposed to list her experience, but Celeste had none. “I wrote a letter, and was straight up. I said I was no author.”

Within two weeks, she had five agents contact her. They told her it was a breath of fresh air. She signed with a woman who was “a New York version of me. … I have to ask her to talk slower.”

She’d been warned about rejection, but eight weeks later heard from Harper Collins, which wanted the book for its Thomas Nelson line, which publishes mostly Christian books.

“There was some language we butted heads on. They took the language out, but I’m a Christian and I talk that way. They said it’s not a memoir, it’s fiction. I was so green that it took me five Twinkies and a bag of M&Ms for that. But I finally caught up.”

The book is based on the friendship the three women had. Celeste is working on a second book now, part of her deal with the publisher, and it’s going to be about a woman who makes a number of bad choices, but survives. She’s writing what she knows.

When people ask who her favorite author is, she says, “I read Sports Illustrated cover to cover and I like Stephen King. I’m not a voracious reader.”

But she’s thrilled about this book, “because Lynn will always and forever be remembered. It’s thrilling for me and her family. The book is part of a really fulfilled life.”

She was surprised her publishers had never heard of hummingbird cake. In her part of Louisiana, it’s also known as the wake cake, the thing friends and neighbors bring to the bereaved. It’s the cake served on every holiday. It’s associated with memories, sad and sweet.

Celeste has plenty of those, and it looks like now she’s started writing, she’s got a lot to say.