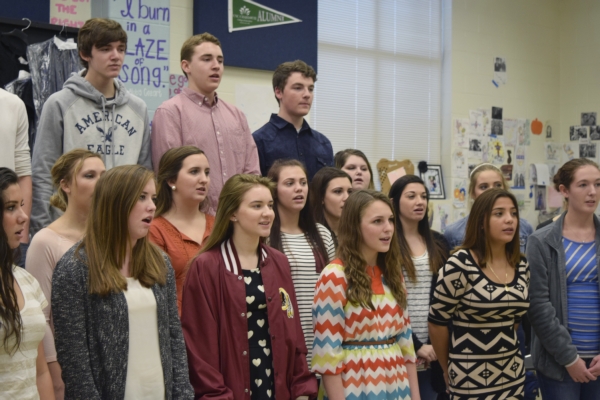 This year, the Honors Chorus at Jesse C. Carson High School will spend their spring break reflecting on a hallowed piece of American history. The group has been invited to perform at Pearl Harbor.

Starting on March 28, the group will spend five days in Hawaii with a schedule that includes tours of the memorial, a viewing of the sunken USS Arizona and an outdoor concert aboard the USS Missouri.

As far as Choral Director Megan Wyatt is aware, it’s the first time a choral group from Rowan-Salisbury Schools has sung at Pearl Harbor.

Wyatt said she hopes the group of 27 students takes the time not just to bask in the sun, but to appreciate all that Pearl Harbor represents.

“I want them to appreciate that people have actually fought for them,” she said.

She said the group has struggled with learning patriotic songs in the past, but she tries to tell them that it’s important, and hopes that seeing the quiet solemnity of Pearl Harbor will give them a foundation.

“I want them to actually take it all in,” she said.

The trip itself has been in the works for nearly a year. In March 2015, Wyatt contacted the travel group that helps the choir arrange performances to see what opportunities were available.

“I just got a wild hair one day,” Wyatt said.

They came back with Pearl Harbor. From there, the choir auditioned, singing “Danny Boy” and sending the recording off for review. When the results came in, Wyatt said, excitement washed over the young singers, and the anticipation’s been building ever since.

The students, ranging from freshmen to seniors, worked part time jobs over the summer, saved every penny and took up donations to afford the trip, Wyatt said.

But despite the solemn remembrance Pearl Harbor brings, there’s some brightness to the opportunity, as well. Many of the students have never flown before, and none have ever been to Hawaii. In a group meeting, they’re buzzing with excitement, chattering about being able to visit such a weighty piece of history and to tour the island of O’ahu.

Dalton Cauble said his dad, a veteran, will be coming along as a chaperone, and is looking forward to seeing Pearl Harbor with him. In all, 31 family members will be accompanying their budding singers in March.

Kelly Short, a senior, has traveled to New York with the Honors Chorus, and remembers that doing a performance in Hawaii came up more than once in years past.

“I remember talking about this,” she said.

Short said she’s glad she gets to have this experience with the group, and can’t wait for the trip.

While in Hawaii they’ll also have a performance at the Ala Moana Center, the world’s largest outdoor mall.

The fever’s been building for a year, and now Wyatt is cranking up the volume with practice twice a week in the mornings to get the students ready to go. They’ll be singing “Danny Boy,” and several patriotic songs during their open-air performance on the USS Missouri.

Wyatt thinks that the final month of waiting is going to be the hardest.

“When we’re in all this cold weather it’s got us thinking about Hawaii and how fun it’s going to be,” Wyatt said.

But she knows the group will shine.

The Carson Honors Chorus has also performed at Disneyworld and at Saint Malachy’s Roman Catholic Church and the aboard USS Intrepid, both in New York City.

Lutheran Home’s got spirit, how ’bout you?