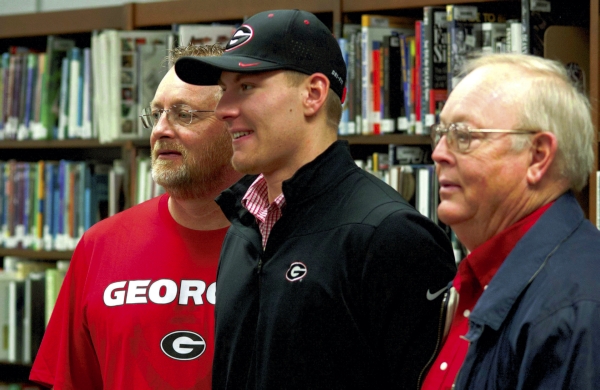 LANDIS — South Rowan punter Marshall Long signed a National Letter-of-Intent with the University of Georgia on Wednesday, bringing an end to what he called the “craziest weeks of my life,” and opening the door for additional adventures between the hedges in Athens.
In recent weeks, Long has punted in the Army All-American Bowl in San Antonio, committed to Virginia Tech, de-committed from Virginia Tech, and committed to Georgia.
Punters aren’t usually the target of recruiting battles, but Long isn’t a normal punter.
He averaged 46.5 yards on 57 punts as a South senior to shatter long-standing local records — NFL punter Tommy Barnhardt’s South record (41.5 yards per punt in 1980) and the late Bill Leonard’s all-time county record (43.0 for Boyden in 1967).
Discussing his recruiting a few weeks ago, Long made it clear that while he expected to go to Virginia Tech — which had offered a full ride — the school that could change his mind if it decided to offer before signing day was Georgia.
Long had visited Georgia on Nov. 21 and had fallen in love with the program, the school, the fans and the atmosphere. But Georgia didn’t know if it was going to use a scholarship on a punter. The Bulldogs maintained contact with Long, but there was no offer for a long time.
“Virginia Tech was my No. 2 school, I was ready to go there, and I certainly could’ve been happy going there,” Long said. “But Georgia was my dream school all along. Georgia was No. 1. Georgia is the SEC, and the SEC is big-time football. It’s the best.”
There were twists and turns, as both Virginia Tech and Georgia are going through head-coaching transitions. New Georgia head coach Kirby Smart, previously the defensive coordinator at Alabama, has been feverishly putting a staff together. His hires included the early January addition of Shane Beamer as tight ends and special teams coach.
Beamer, son of long-time Virginia Tech head coach Frank Beamer, had been the running backs coach at Virginia Tech, and is someone Long had met on his trips to Virginia Tech. Long felt comfortable with Beamer.
Last Thursday, Long finally got a call from Smart and their conversation included the scholarship offer Long had longed for.
“With Coach Beamer at Georgia for special teams, it was a no-brainer,” Long said. “It was an easy decision to pick Georgia. I’m still in shock a little bit, but I’m very happy.”
Long, the South Piedmont Conference Kicker/Punter of the Year and a 3A All-State pick by NCPreps.com, got an idea of what big-time football will be like when he competed in the Army All-American Bowl in San Antonio.
“There was so much talent there, the No. 1 tight end in the county and the No. 1 quarterback, players like that,” Long said. “I’m a big guy (nearly 6-foot-3 and 225 pounds) and I felt like I was the smallest one there.”
Long believes he’ll have a chance to compete for punting duties next fall, so it’s conceivable he could be punting against UNC when the Bulldogs open on Sept. 3 in the Georgia Dome. Georgia’s scholarship punter, Collin Barber, is a senior, and Brice Ramsey, who did a lot of the punting, is a backup quarterback.
“I’ll have a shot right away,” Long said. “I really don’t want to red-shirt.”
South Rowan coach Daniel Yow endured an 0-11 season in his debut, but Long and kicker Brennan Lambert, who is signing with Catawba, have given him reasons to smile.
“It was kind of a perfect storm the way things lined up for Marshall the last few weeks,” Yow said. “A full ride to the school that’s been No. 1 for him from the beginning? I don’t see how you can beat that, and we’re absolutely excited for him.”

Smart took the word of one of his assistants on the final call of the offer.

“What he said was that they’d lost Collin Barber, who just graduated,” Long said. “Brice Ramsey finished the season out punting, but he said he wanted him to play quarterback a little bit. He’d seen my tapes, and Coach [Shane] Beamer had talked to him about me. I guess he just felt good about it. I was glad they finally did pull the trigger.”

Even with the Bulldogs high on the list, it was not an immediate commitment.

Now, the Bulldogs will add a player who showed his own consistency during his senior year.

“This season, I punted a lot,” Long said. “I punted 59 times with a 46.7 yard average. I just punted, though. Our kicker is going to play college ball. He did the job, and he did it well.”

Despite the fact that Georgia needs a kicker as well, don’t expect to see Long lining up for many field goals.

Off the field, he believes fans will be getting someone they can cheer on for his efforts between the hedges and elsewhere.

“I’m a people person,” Long said. “I talk to everyone, and I enjoy seeing the fans. I’m a hard worker, too. That’s what got me here, and I’m going to give everything I’ve got, on and off the field.”

As for his words to the Bulldog Nation, Long kept it short and sweet.

“I’m ready to be there, and I can’t wait for a great season,” Long said.