Should Harvard be free? 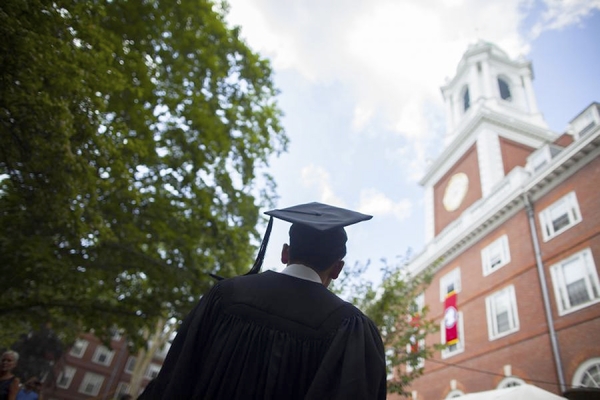 Should Harvard tuition be free? The debate is on. Photo courtesy of Harvard Univeristy

Five candidates running for Harvard’s board of overseers — the panjandrums who help set strategy for the school — have raised a provocative question: Should America’s most renowned university be tuition-free?

The candidates, including California software entrepreneur Ron Unz and consumer advocate Ralph Nader, argue that because Harvard is perched atop a staggering $37.6 billion endowment it could afford to abolish undergrad tuition.

By demolishing the formidable financial obstacle to gaining a Harvard degree, the candidates say, the school would attract thousands of top-flight students who don’t apply now because their families can’t afford it. They say that would help Harvard assemble a more diverse class of the best and brightest students.

Harvard spokesman Jeff Neal counters that endowments aren’t like bank accounts, to be drawn upon for any expense. Some of Harvard’s endowment has to be spent in ways that were dictated by the people who donated the cash.

One-third of the students who go to Harvard come from families with $250,000-plus incomes, so they can afford tuition. Why should those wealthy students get a free ride? As it is, students from families that earn less than $65,000 a year pay nothing now; those whose families earn up to $150,000 pay reduced rates.

Then there’s the green eyeshade brigade, which warns that the Harvard endowment must be maintained in perpetuity. Those billions support not just undergrad education but also basic science research, museums, a library system, and schools of medicine and law.

Nader and the others campaigning under a “Free Harvard, Fair Harvard” banner told The New York Times that if Harvard boldly abandons tuition, “it will ricochet across the Ivy League.”

Don’t bank on a fast change. Nader and his allies seek five seats on a board elected by alumni.

The campaign for free tuition couldn’t even win the support of The Crimson, the Harvard student newspaper. Its editorial called the idea “neither a feasible nor an appropriately targeted approach to making Harvard more equitable.”

If tuition is a barrier to higher education, and a better-educated citizenry is key to the nation’s future, should tuition be eliminated?

We’ve supported efforts at City Colleges of Chicago to waive tuition for public high school students who maintain a high grade level — an incentive to study.

The University of Illinois recently announced it will freeze tuition for incoming in-state freshmen for the second year in a row. It has been losing excellent students to other Midwest schools that offer competitive tuition and sweeter financial aid. The university says its in-state enrollment increased by 10.2 percent last year after the first tuition freeze.

That’s a sign, we hope, that public and private universities are starting to recognize they need to be financially efficient operations.

As for a tuition-free Harvard: It already has a highly motivated group of applicants. It already provides significant aid to the neediest students.

Nader’s proposal would have a very un-Nader-like outcome. It would provide a terrific financial subsidy to wealthy families. But it wouldn’t do much else.