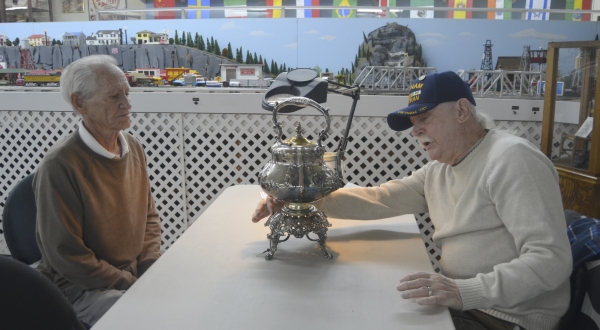 James Coone, left, brought in this tea caddy to be appraised by certified appraiser Michael Hansen, right, Saturday during an Antique Appraisal Fair held at the Spencer Doll and Toy Museum. The piece was appraised at $125 to $175 and dated to 1910. Shavonne Walker/Salisbury Post

SPENCER — James Coone unknowingly had quite a treasure on his hands with a silver tea caddy that he bought from an estate sale. He’d bought some other items, but wanted to learn more about this serving piece.

“I want to know what was the era, the value and what country it’s from,” Coone said.

He brought the piece Saturday to an appraisal fair held at the Spencer Doll and Toy Museum, located in downtown Spencer, not far from the N.C. Transportation Museum. The fair, which was originally scheduled last week, had to be postponed because of the winter storm.

Each interested party paid $5 per item to be appraised with the proceeds benefiting the museum.

Coone learned quite a bit about this treasure from certified Uniform Standards of Professional Appraisal Practice (USPAP) appraiser Michael Hansen, who is also a Concord-based antique dealer. Hansen dated the tea caddy to 1910 and it likely originated from England.

The history of the caddy as it was told by Hansen is that the tea was made in the kitchen and the caddy was merely a way to keep it warm on the table. A sternum would’ve been used on the bottom and the hinge pins in the front and back would’ve been lifted to light the sternum and to remove the whole tea pitcher from its base.

There are no markings on the piece, Hansen said, likely because it was made in a particular region in England and needed no identifiers. He said if the piece were made here in the United States, where people want to know where an item comes from so they can add pieces to their collection from the same set, it would’ve had an etching of some sort.

The top of the lid was no longer silver, he said, probably because someone polished it until the silver had been rubbed away leaving a dull patina behind. The item probably was brought to the U.S. from someone who’d been in England.

“I needed to talk to an expert and he’s the best I’ve found,” Coone said.

After learning the history, Coone seemed satisfied. As to what he’ll do with the piece that’s valued between $125 and $175, Coone said he plans to sell it.

Hansen said he’d never try to tell anyone what to do with their pieces, but if they ask he’ll point them in the direction of antique dealers, shows or auctions where they could sell pieces.

Hansen has been a certified appraiser since the 1970s when he went to school for it in Daytona and more recently in Baltimore when he became re-certified.

The 74-year-old has no brick and mortar store, but attends antique shows with his wife, Gayle, who is an avid doll and toy collector. Hansen has been an antique dealer for 51 years. The U.S. Navy veteran became an antique dealer to supplement his income. He’s also retired from the U.S. Postal Service.

Over the years, he’s seen items that weren’t monetarily worth much, but held more value to the owner because of where the piece came from or how it became apart of a collection.

He recommends people who own an item that has been passed down through family write on an index card where the piece came from, who owned it and how long it’s been in the family. He said those details help when appraising an item and is a neat story to tell for the owner.

The next appraisal fair will take place Aug. 26 and 27 at the museum, 108 Fourth St., Spencer. The museum will have its second annual Black History Month Fashion Show from 6 p.m. to 8 p.m. on Feb. 20. Tickets are $10 and must be purchased in advance.

Visit www.spencerdollandtoymuseum.com for more information about the Spencer Doll and Toy Museum and other upcoming events.

By Mark Wineka mark.wineka@salisburypost.com Elmer Lam, whose love for railroading, skills as a salesman and passion to succeed, made him... read more