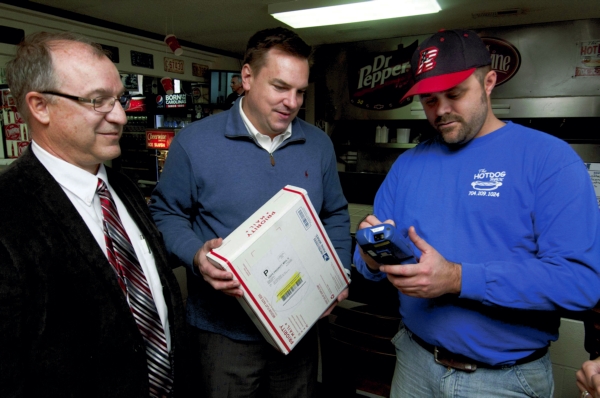 To mark, even celebrate a new way letters and parcels can be addressed in Granite Quarry, Mayor Bill Feather and U.S. Rep. Richard Hudson, R-N.C., helped in the delivery of mail to four different businesses Friday afternoon.

Leah Morgan, one of four carriers out of the Salisbury Post Office who deliver to addresses in this area, actually delivered the mail to the Hot Dog Shack, Crescent Construction, Slice of Heaven Pizza and the East 52 Auto Care Center.

Hudson and Feather were there, too, in support and to drive home a point — it’s a new day for mail delivery in Granite Quarry.

Last fall, Hudson and his office persuaded the U.S. Postal Service to allow residents and businesses within the town limits of Granite Quarry to begin using “Granite Quarry” in their address lines.

Previously, unless they had a post office box at the Granite Quarry Post Office, town residents and businesses had to use “Salisbury, NC 28146” as part of their addresses.

The Postal Service said because the Granite Quarry mail was delivered from the Salisbury Post Office, it had to have the Salisbury address. Town officials feared they were losing some important automobile tax revenue because Granite Quarry properties were sometimes credited to Salisbury, or not counted as being in the town.

Beyond that, there was just simple confusion for carriers such as UPS and FedEx, not to mention Google Maps and other GPS applications. There also were marketing headaches for Granite Quarry businesses whose advertisements or websites often had to include their mailing addresses, which, again, were “Salisbury, NC 28146.”

Feather and fellow town board members asked the Postal Service to consider allowing people in Granite Quarry to use “Granite Quarry” in their mailing addresses, as long as they also kept the “28146” ZIP code.

At first their request was rebuffed by the Mid-Carolinas District of the U.S. Postal Service and its acting district manager, Maged Aziz. When news of the rejection was publicized, Hudson’s office successfully intervened on the town’s behalf.

Hudson said Friday it was the kind of common sense thing he tries to address as a lawmaker. “It’s what I try to focus on,” he said.

Feather said he was surprised at how fast the Postal Service changed its mind once Hudson became involved and made sure people at the top were aware of Granite Quarry’s problem.

“It was almost a shock,” Feather said. “We’re very appreciative. … It is helping.”

Aziz was among several people who gathered at Town Hall Friday afternoon to recognize the change.

Jourdian said mail carriers usually alert him if there are any problems, and they haven’t in connection to anyone’s using the “Granite Quarry, NC 28146” address. He said he also wasn’t aware of any customers calling with concerns.

(People in Granite Quarry can still use the “Salisbury, NC 28146” address if they prefer, the post office says.)

Morgan backed up Jourdian’s impressions and said she experienced no delivery problems with the increasing use of “Granite Quarry, NC 28146” in addresses, even over the busy Christmas holiday.

“Each day, I see more” people using Granite Quarry as part of their addresses, Morgan said. “I’m excited they could do this. … There was a time when we did have a problem.”

Mayor Pro Tem Mike Brinkley said he had always used a Granite Quarry P.O. box to avoid confusion and had asked his tenants to do the same. Former Mayor Mary Ponds said she also has always relied on a box at the Granite Quarry Post Office for her mail.

Jason Smith, owner of the Hot Dog Shack, expressed his appreciation to Hudson for the change. Morgan delivered a Priority Mail parcel to Smith’s business Friday afternoon. It had used the “Granite Quarry, NC 28146” address.

“The last year we really pushed it,” Smith said of getting rid of the Salisbury addresses for his Granite Quarry businesses, “and all of a sudden, it was like, boom, it’s gone.”

Meng said it had not been unusual to see UPS and FedEx carriers out in the construction company’s parking lot trying to figure out an address.

When Hudson, Feather, Morgan and all the people came into the Crescent office Friday afternoon to deliver the mail, Meng laughed and said, “I guess that just made it official.”