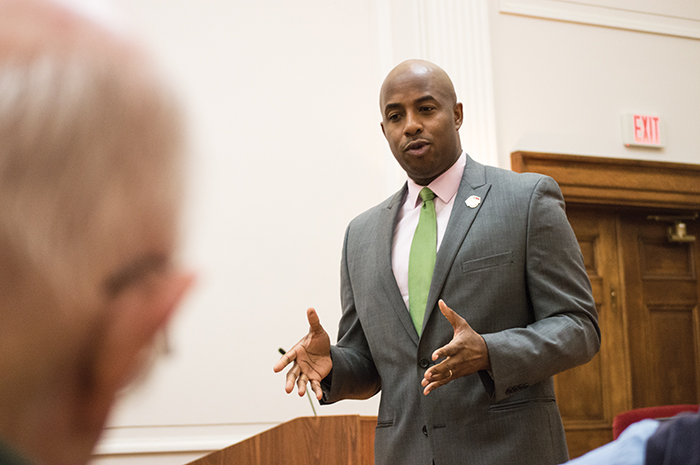 North Carolina’s Democrats need a platform of candidates that reflect the state’s demographics to push the state forward, according to Spring Lake Mayor and U.S. Senate candidate Chris Rey.

Rey on Thursday spoke to Rowan Democrats during their monthly meeting. He’s the latest in a number of candidates for office who have visited local Democratic party meetings in recent months. Rey faces three Democratic opponents in the March 15 primary elections for U.S. Senate. His competition includes former state legislator Deborah Ross, considered by many as the front-runner, Durham businessman Kevin Griffin and Greenville resident Ernest Reeves.

In his speech, Rey touted his local government and professional experience. During his speech, Rey framed himself as a candidate who understands difficulties of average North Carolinians.

“If you don’t put together a ticket that’s going to move a generation, then we’re going to keep on getting what we’re getting,” Rey said. “This U.S. Senate race, if Chris Rey is the nominee, it will be a nationalized race. Then, it’s going to be big Richard Burr against this small town mayor.”

“A lot of folks talk about if they could only get certain groups out to vote,” he said. “We have to remember it takes a certain candidate. People get behind candidates because they believe in them, not because their policies are lofty. It’s because they really believe. I believe that I have the ability to go to certain parts of this state and gets folks excited and bring them out to vote.”

Rey said he’s not solely focused on helping himself get into office. By energizing the Democratic ticket, Rey said, North Carolina Democrats could diminish Republicans’ control of state government, if a Democratic governor, alone, was elected. Rey said he’d be known for vetoing the most bills ever from the state legislature. Rey said a number of bills would also be overridden by state legislators.

Rey didn’t delve deep into policy positions during his speech. He briefly addressed the importance of cyber security, a topic Rey knows well. In 2000, Rey enlisted in the U.S. Army as a computer information technology analyst. He attended officer candidate school and became a second lieutenant two years later. During his time in the Army, Rey received a Bronze star.

During his initial speech, Rey didn’t extensively talk about the Democratic primary. When asked later about the differences between himself and other candidates, Rey said his local government experience means he’s accustomed to “getting things done.”

“What being a mayor has done is give me the ability to make sure I know how to get things done,” he said. “You just don’t have any excuses. You have to be innovative. You have to be on the spot with some of the challenges that are going on.”