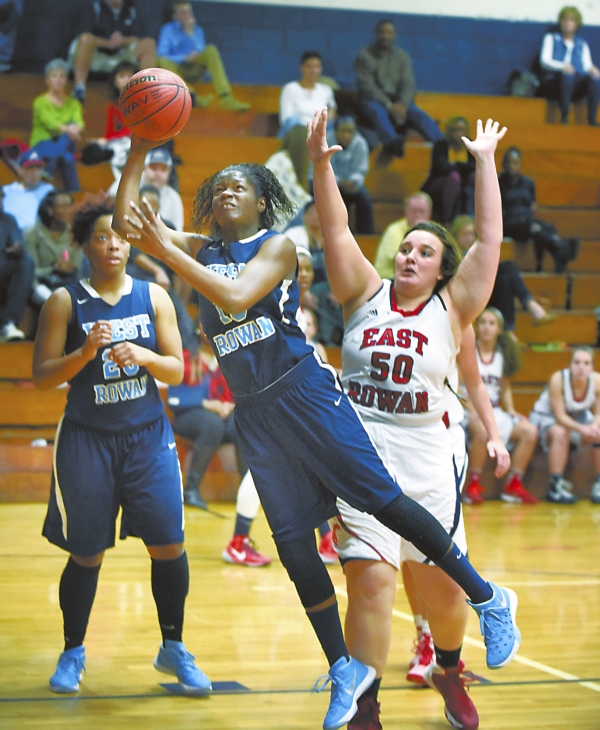 MOUNT ULLA — West Rowan’s girls weren’t looking for more excitement on Thursday, just a victory.
They got it, building a 14-point lead against visiting Carson by the end of the first quarter and cruising to a 64-49 South Piedmont Conference win.
Compared to Wednesday’s wild scrap with South Rowan this was a snoozer for the Falcons, and with West playing back-to-back-to-back this week, Poole gave standouts Khaila Hall and Egypt Alexander some well-deserved time off as their teammates finished off a routine victory.
“We looked at the film of the South game, and the girls could see we got out-hustled and out-worked by South,” West coach Ashley Poole said. “South wanted it, and they almost got it. We were lucky to win. We wanted to come out and play a lot stronger tonight against Carson.”
The Falcons did. They took care of this one early, with a first-quarter barrage of five 3-pointers, including two each by Hall and Mary Sobataka.
Alexander (16 points), Taylor Martin (13), Sobataka (11) and Hall (11) scored in double figures to offset 20 points by Carson sophomore Olivia Gabriel, who made two 3-pointers and a plenty of runners.
Carson (10-9, 6-7 SPC) played again without No. 2 offensive option McKenzie Gadson and lost its seventh straight contest. The only good news for the Cougars besides Gabriel’s effort was Maren Shumaker taking several charges and Anne Marie Turney returning to action following a concussion.
West (16-2, 12-0 SPC) led by 17 points at the break. Carson fell behind by 22 in the third quarter, then cut its deficit to 15. But a 3-pointer by Sobataka closed the quarter and pushed West’s lead back to 54-36.
West finished off a season sweep of the Cougars. The Falcons won their eighth game in a row and they’ve won every contest they’ve played in 2016.
The best news for the Falcons was a double-double by Hall, who had 10 assists.
She scored only four points against South on Wednesday.
“We talked to Khaila about looking to score more,” Poole said. “There’s no pressure on her to score, but we do need her to score some. She can dominate a game in a lot of ways, and she had a great game tonight setting up her teammates.”